Designers are looking for anything that gives their equipment greater capabilities or more flexibility to fit a wider range of applications.

As component suppliers and designers of power transmission components, companies within the Altra Industrial Motion family are uniquely positioned — we’re standing on both sides of the industrial product design fence. In fact, we often get a third view. We’re designers too, working closely with our OEM customers, but also with end-users to often find solutions to applications the machine designer may not have envisioned.

Designers Are Looking For...

This varies from one market to the next, but as a generalization, designers looking at power transmission components are seeking characteristics such as: 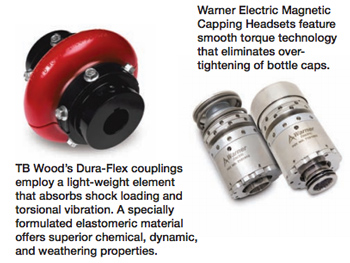 At Warner Electric, we recently modified the ERS series of electrically-released, spring-engaged brakes to serve as pitch brakes for wind turbine applications that require both “static” holding power and the ability to withstand high inertia dynamic stops in an emergency situation. The electromagnetic brake is mounted outboard of an inductive encoder which is mounted to the back of a motor to position the blades to the proper pitch. In normal use, the brake functions as a static brake to hold the blades from rotating in a power-off situation, during routine maintenance or for other reasons.

The largest brake in the Warner Electric ERS series, the 11.3-pound ERS 68, has been tested to a capacity of more than 20,000 fully-loaded dynamic stops, surpassing the design spec by a factor of 20.

Previous to the new design, pitch brake models have utilized two-piece designs that require an adapter plate, extra fasteners and an external boot-type seal in the gap between the brake and the adapter plate to prevent contamination.

Warner Electric is also expanding its installations of smooth torque capping headsets in the bottling industry. The magnetic headsets provide constant torque, which eliminates the over-tightened caps that result from pulsating torque headsets. Bottlers report that over-tightened caps is the #1 problem for them, and those with the new headsets are seeing major reductions in the variation of removal torque. The magnetic headsets also generate less shock in the system compared to pulsating torque headsets, enabling longer life of machine components, especially retention knives.

To improve the corrosion resistance of marine-duty offshore oil platform winch brakes and to provide the power to control larger anchoring systems being installed today, Wichita Clutch has redesigned its Kopper Kool series of heavy duty clutches and brakes. In 2008 Wichita introduced the new AquaMaKKs series with top-of-the-line, marine-grade components and engineered designs that have advanced the state-of-the-art in this series of clutches and brakes which are also used in heavy-duty mining applications, in logging and forestry, and in water treatment/wastewater industry. The most critical components in heavy duty offshore platform winch brakes are those that cool the units during operation when friction discs are actuated to provide tension control to the winch cable. The units transmit torque by applying axial force from the pneumatic, hydraulic or spring-set actuator that provides accurate torque control for constant tensioning.

The friction discs are alternated with copper plate water jackets that absorb heat using a closed-loop water circulation system. Previously constructed from cast iron, the AquaMaKKs water jackets are the first in the industry to be constructed from non-metallic, composite material – an idea borrowed from aerospace – that offers the best corrosion resistance available on a winch brake.

The AquaMaKKs offers additional capacity that is needed to meet the more stringent requirements of the larger anchoring systems being installed in the Gulf and other parts of the world.

Using full 3-D solid modeling and Finite Element Analysis (FEA), the engineering team worked to maximize the heat dissipation and torque capacities of the units, provide superior corrosion protection and reduce the component count as well as the weight of the units. 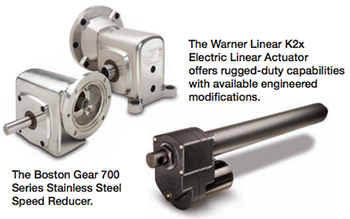 To meet the demanding requirements of the construction industry, Warner Linear engineered a new, two-way clutch that allows the K2x to raise the dump box on construction-rated ATVs with a 2,700 lb. load capacity and lower the empty box at a load capacity of only 200 lbs. The two-way clutch helps prevent damage to the framework of an empty dump box while lowering the box. Warner Linear also designed a bi-directional current limit control called a Quick Stop as an optional safety device on its K2x actuators for ATV dump box applications. The Quick Stop:

Energy efficiency is an important initiative in nearly every market sector and nearly every component or equipment designer has this in mind when they’re contemplating new products or product enhancements. By engineering products and power transmission processes focused on energy savings, we and others are helping customers run production lines and operations with less energy, at lower cost per output, and often at faster speeds. This isn’t just an environmental initiative – it’s a serious cost-saving opportunity for end-users and an opportunity to gain competitive advantage and market share for OEMs.

Advanced materials are also playing an important role in product design today, and will continue in the immediate and distant future.

Green industry and alternative energy applications will grow in the coming years. We’re currently testing with one of the world’s largest manufacturers of wind turbines to supply pitch brakes that offer superior service life which is important to reduce maintenance on these turbines.

Another alternative energy development is in harvesting the energy of tidal power. These kinds of innovative projects will grow and will need the expertise of power transmission engineers who have long years of experience and the ability to adapt products to meet new demands.