Advanced Safety Brakes are Critical to Dragline and Shovel Performance 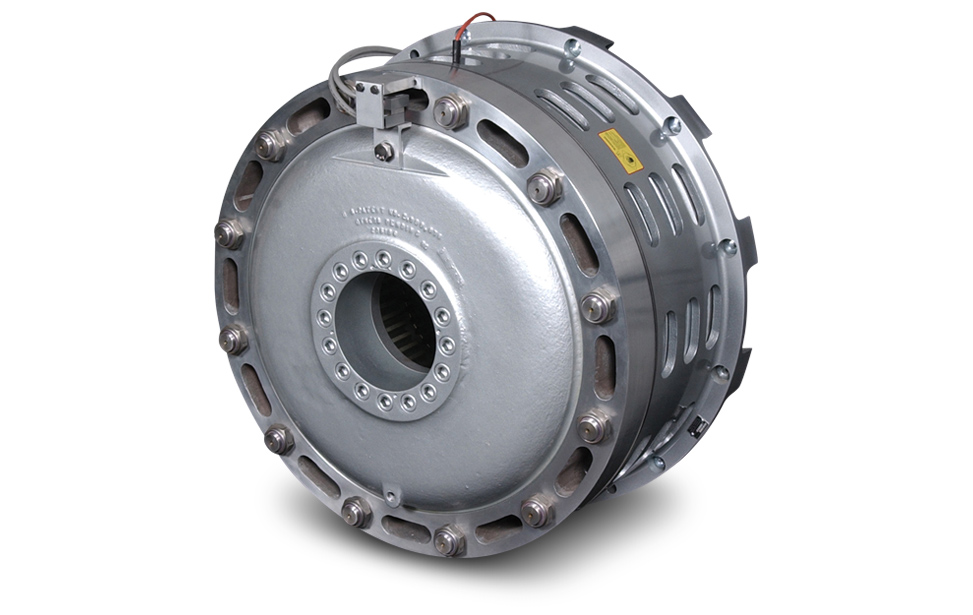 Looking back three decades or so, as shovels and draglines progressed in their capacity and reliability requirements, disc brakes became the norm in original equipment usage. They were readily mounted to the motors in electric machines and were simpler with respect to adjustment and the number of components in their design.

Their designs, too, progressed to meet the ever-increasing loads and stringent stopping requirements of the machines. And it quickly became apparent that the retrofit of older machines made sense from the standpoint of both reliability and reduction of mine operating costs. Machines that were retrofitted were paying for the conversion costs in record time, and thousands of disc brakes have been installed on shovels and draglines since the early 1980s. The advantages are less wearing parts, ease of adjustment and torque consistency. That means more uptime which is money in the bank to any mine operation.

Torque consistency is by far the most important feature on a safety brake. The reason for this is that the brake is spring applied and the only means for changing the brake torque capacity is to adjust the amount of spring force. If the brake wears, friction coefficients change with use, or if the brake fades badly due to the heat of engagement, load control and the machine drive train is in jeopardy. By any comparison, disc brakes are superior to drum brakes. They are more reliable because of the simplicity of their design, their ability to incorporate the best of the friction materials, and their increased friction area which yields better wear and heat capacity characteristics.

Disc brake wear is far less than comparable drum brakes so wear adjustments are infrequent. Wear measurement is simple and adjustment, if required at all, is accomplished with the simple removal of a shim. Drum brakes, on the other hand, require cranking on adjustment screws and is subjective at best.

Brakes of either style, drum or disc, consist of a brake drum or discs mounted to the electric motor’s rotating armature which control the swing, hoist, drag, crowd, and propel functions of a digging machine. Typically, there are several motors controlling a single function. A brake is mounted on each motor and must share the load equally to be effective. 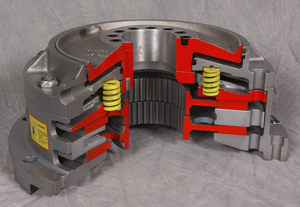 A disc brake is designed with rotating discs that are splined to a hub which is keyed or splined to the rotating motor shaft. These discs, or plates, slide axially when engaged and carry the friction lining. The braking surfaces are radial and the friction surface is defined by its outside and inside diameters. These discs engage the stationary components when actuated.

Because these brakes are supposed to stop the load when a power loss occurs, they must be self-actuated without any means of external influence. This is accomplished with the use of springs to apply the brake when power loss is evident. Therefore, the brakes are spring applied and either pneumatically or hydraulically released. Hence the term ‘safety brakes.’

In a drum brake, the drum is a cylindrical member keyed or splined to the electric motor’s shaft extension provided for the brake function. The outside diameter of the drum is the braking surface to which the stationary brake lining engages when actuated.

The stationary components of the drum brake consist of clamshells surrounding the drum which carry the friction lining and the mechanism to engage and release the brake. The components are composed of levers to gain mechanical advantage, pins for the levers to pivot on, and engagement springs with wear adjustment controls. Also incorporated is a means of releasing the brake such as a pneumatic cylinder.

In contrast, a disc brake is designed with rotating discs that are splined to a hub which is keyed or splined to the rotating motor shaft. These discs, or plates, slide axially when engaged and carry the friction lining. The braking surfaces are radial and the friction surface is defined by its outside and inside diameter. These discs engage the stationary components when actuated.

A housing, bolted to the motor frame, contains the stationary plates which are stacked between the rotating discs. These plates are free to move back and forth by mounting them on studs affixed to the housing. The end cap of the housing contains the release piston and the actuating springs. When the piston is released upon loss of machine power, the springs move the plates axially and engage stationary plates against the rotating discs thereby affecting the braking action.

One of the problems with drum brakes is that they are difficult to maintain and require frequent adjustment. If the adjustments are not made in a timely manner the brake’s torque capacity falls off severely. When this occurs the brakes do not share the load equally and a snowballing effect causes the tandem brakes to become overloaded. This is the worst of all “Catch 22” situations and catch-up is difficult.

Brakes in mining applications must be monitored and adjusted. The more difficult this is, the less likely proper maintenance will be performed. Further, the more frequent the requirement for adjustments, the more likely they will be back-burnered with progressively adverse machine performance and safety.

Drum brakes are limited with respect to available friction surface and choice of friction linings because they require linings molded to conform to the drum’s surface. Area is composed of the drum diameter and its length. To establish uniform friction pressures across the drum it must not exceed certain drum diameter to length ratios.

Disc brakes also have radial design limitations to maintain uniform friction pressures but can easily stack more plates. A two plate unit has twice the area of a one plate unit and so forth. Lining choice is not limited to complex molded configurations so the complete range of high energy friction materials is available for incorporation as the design dictates.

A Caution Against Compromise

It is always remarkable to us that we spend thousands of hours testing and qualifying application-specific linings to provide the torque level specified by the OEM for proper load control and drive system protection…only to find that in rebuilds, users will buy any off-the-shelf lining that fits on the disc. Or they’ll replace factory plates with opposing plates made from low-to-medium carbon steel plate as a substitute for the heavy duty cast plates painfully developed to have the wearability, heat checking resistance, thermal mass and frictional characteristics required. Or they’ll retrofit the original designed units with aftermarket brakes not designed to OEM equipment specifications.

It cannot be overemphasized that a Spring-Set Safety Brake’s torque output is a compilation of matched components tested to provide consistency of braking effort over its useful life. The very fact that applied force comes from springs, demands that all other factors affecting the brake’s torque output respond in a predictable manner. If any component such as the friction material, the opposing rubbing surface, or the springs themselves fail to live up to expectations, the brake cannot achieve its ultimate purpose of stopping the load in a safe controlled manner that does not cause harm to equipment or personnel. The use of unauthorized parts for servicing safety brakes, therefore, will always ensure that the original design specifications are not being met.

Also, since safety brakes are usually applied in pairs, or multiple of pairs, servicing one unit in a bank of brakes with unauthorized parts places the other units running with OEM parts in jeopardy if the serviced brake does not pull its share of the load. The additional work being forced upon the Original Equipment brakes will hasten their service interval. This is an insidious cycle; once started, even new Original Equipment brakes can fail in relatively short time periods when they’re paired up in banks of brakes that have been serviced with unauthorized parts.

Considering the original machine investment, stringent uptime requirements, and the safety issues involved with an improperly serviced safety brake, it is within the realm of reason to demand Original Equipment parts and authorized service for these relatively inexpensive, but critical members. Original Equipment parts are easily identifiable and authorized service and parts dealers are available in all major market areas.