While little can be done to improve the human side of the equation, new motion control advancements for baggage handling equipment offer insight on improving machine operability and reliability.

We’ve all been there. Instead of trying to cram more items into a carry-on, we spin the wheel of chance and check a bag — and then wait in hopes that the luggage actually make it to the same destination. There’s definitely some adventure in trusting that the multiple hands touching the bag will ensure it gets to the right place. In contrast, significant advancements in the equipment that delivers the passenger his or her belongings have seen significant upgrades while operating in conditions that are as harsh as any industrial automation unit.

Gary Haash, a product manager at Warner Electric explains, “Depending on the airport layout and the locations of conveyors and pushers, these systems may operate in extreme cold temperatures during winter months and very hot temperatures during summer months. They’re also located where a fair amount of dust and dirt is present.” This makes the motion control components being specified and implemented a key concern.

To help many of the major airports better facilitate these functions, Haash and Warner Electric recently upgraded their CBPC-3590 Clutch Brake Positioning Control. Typically mounted directly to the pusher assembly — and subject to a fair amount of shock and vibration — these control units also utilize isolation mounts to minimize the stress. 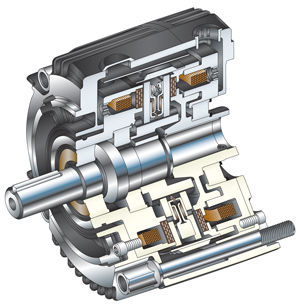 In addition to a new controller, advancements were also made to the packaged clutch/brake system from Warner Electric. The includes easier access to the set screw, an armature retainer ring to help maintain original air gap settings during shipment and installation, and the use of phenolic material in expanding the durability of the splined armature hub.

Due to the start-stop nature of the push mechanism they control, the units may be cycled at fairly high rates, making them subject to high shock loads when your luggage is ever so delicately pushed from one direction to another.

The 3590 was developed to replace an existing control that had to be mounted in an enclosure and hard-wired to provide its specific functions. A more simplified design with an integrated microprocessor allows for these functions to be met, but with greater reliability due to less internal wiring and a fewer number of components. These improvements stemmed from internal analysis as well as customer feedback.

In addition to utilizing fewer internal components, the new controller offers a simplified set-up and initialization. While previous models required an extensive set up procedure that took 30 to 60 minutes to complete — and had to be repeated every time the control was replaced — this unit offers an automatic set up procedure that reduces this time to minutes with an automatic set up function. The number of steps has been reduced from 17 to seven. 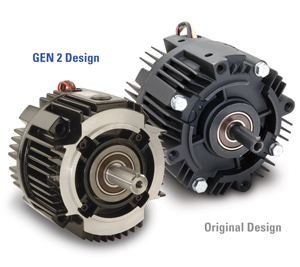 A look at the new and previous clutch/brake design used in many baggage handling systems helps show the added durability.

These enhancements aid in performance, as an external start input signal gets the process started by applying power to the clutch mechanism more quickly than previous generations specific to this particular application.

When the encoder registers the position to the controller and when the preset count is reached, power to the brake is supplied. An internal averaging circuit then compensates, ensuring that the controller stops at the pre-determined position.

A fault relay has also been added to signal users when a controller is malfunctioning or off-line. If the unit is wired into the airport baggage handling system, the control room is alerted if the unit is turned off.

Keypad entry of both torque and frequency of the clutch and the brake has also been incorporated for improved accuracy. Once the baggage is on the ground, several controls have been upgraded and are now in place to get your bag to the claim area as reliably as possible. 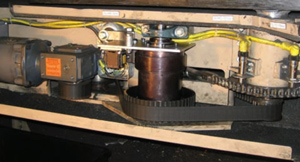 Due to the confined space synonymous with this, and many industrial applications, the use of a Warner CB-10 vertically mounted wrap spring clutch/brake can also be used in meeting the demands of a harsh working environment. In this instance, the anti-backup spring is removed in allowing the paddles to move backwards when luggage is jammed.

Although this is a somewhat unique application, there are still several takeaways for all product designers:

So while checking a bag may continue to be an adventure, at least getting the luggage from the plane to you has seen some significant upgrades, employing many of the same technologies and application-based understanding as the most complicated industrial automation equipment. This application also offers an example of how crucial advancements in motion control have become, not only in product design, but in impacting the day-to-day lives of so many people.