Building the world’s largest man made island is a demanding task for both people and equipment, and the dredging contractor Van Oord responsible for the construction of the Palm Deira project is using durable multi-plate clutches from Wichita to improve reliability and productivity on one of its largest vessels Volvox Terranova. 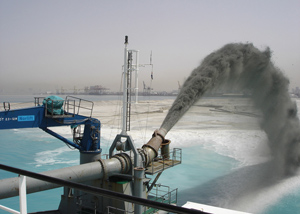 Perhaps the most ambitious civil engineering project underway in the world today, Palm Deira in the United Arab Emirates will be an 18 km long, 9 km wide artificial island built on the bed of the Gulf of Arabia. The third and last of the region’s new Palm Islands, Palm Deira will be the largest man-made island in the world when construction is completed some time before 2015. The island, which is several times the size of its two sisters, Palm Jumeirah and Palm Jebel Ali, will eventually be home to more than a million people.

Construction of Palm Deira, which is part of Dubai’s plan to become one of the world’s leading tourist destinations, will involve the movement of a staggering one billion tons of rock and sand. Dredged from the seabed nearby, these materials will extend Dubai’s waterfront dramatically and will eventually form a palm-tree shaped island with 18 individual fronds jutting out into the sea beyond.

Dutch land reclamation specialist Van Oord is the marine contractor responsible for the construction of the Palm Deira. The company is deploying a fleet of more than 17 specialist vessels to the task.

One of the largest of these is the Volvox Terranova, a trailing suction hopper dredger. (HAM 318 is the largest jumbo hopper in the world at 37,500 m3.) Volvox Terranova was converted approximately 1.5 years ago to a barge loading vessel capable of shifting more than 20,000 m3 of material in a single load. This means that it can fill 2 barges of 10,000 m3 each, and has it’s own bunker, which can hold approximately 15,000 m3. The barges will dump their load by bottom doors and the Terranova will rainbow pump its load.

Terranova collects sand by deploying a huge toothed draghead from the side of the vessel. This channels large quantities of sand from the seabed into the mouth of the draghead intake as the vessel moves slowly along. Powerful suction pumps pull the sand into the vessel’s hopper, while excess water is pumped overboard.

When its hold is full, the dredger moves to the site of the new construction to deposit its load. In deeper water doors in the bottom of the sand hopper can simply be opened to dump the contents onto the seabed below, but as the new islands rise out of the water the Volvox Terranova must use a technique called rainbowing. In this method sand is remixed with water and then pumped at high pressure through a bow jet and fired though the air to the construction site. 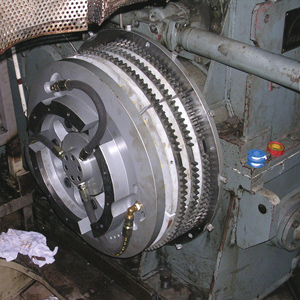 Even with the largest dredging equipment available, the construction of the Palm Deira is a formidable task. At present the Volvox Terranova’s 40 strong crew are working eight hours on, eight hours off for six week stretches, shifting up to 800,000 m3 of sand every single week. Such a punishing schedule takes its toll on equipment too. The combination of sand and seawater handled by the dredger is highly corrosive and extremely abrasive.
Equipment can expect a short life in these conditions, and breakdowns are common. 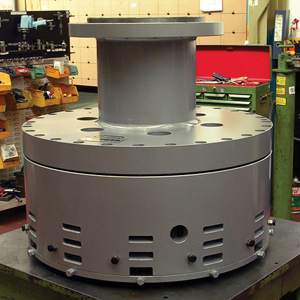 In order to maximize productivity, Van Oord’s engineers are constantly looking for ways to improve the performance of their equipment. On the Volvox Terranova one of the latest improvements has been the installation of a new clutch design for the main dredge pump. Powered by a 6000 kW (8000 hp) diesel engine, the dredge pump drive is linked by a pneumatically actuated clutch/coupling combination that allows the pump to be connected or disconnected rapidly as dredging progresses. Originally, this clutch was a conical friction design. Conical clutches are common in marine applications, but their design makes them tricky to set up and maintain. 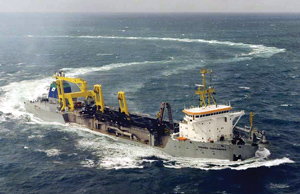 To overcome these disadvantages, Van Oord has now specified new multiplate clutches from Wichita for the dredge pump drive on the Volvox Terranova and the HAM 316. Compared to conical clutches, the multiplate design is lighter, and smaller in diameter but with a larger friction surface area provided by the multiplate design.
The result is a significant reduction in load inertia and this in combination with the increased friction area results in lower surface temperatures and reduced friction wear.

The Wichita Marine Standard Ventilated (MSV) multiplate clutch is built to the highest specifications to withstand the challenging offshore environment. Clutches of this type are in use in many other vessels around the world where they are relied upon to deliver reliable service in a variety of demanding roles. On the Van Oord vessels, these clutches are also operated by Wichita electro-pneumatic controls, which offer a controlled start profile, excellent overload protection and ease of integration into the vessel’s existing control systems. The compact size of the new clutches further aided installation as the new clutch can be installed in the space left by the removal of the original conical design. 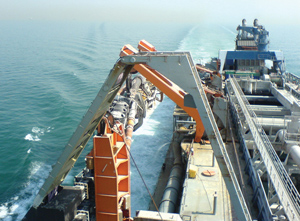 “It is hard to think of a tougher environment for a clutch than in the drives of these giant dredging vessels,” says Andy Smith, Marine Specialist at Wichita Clutch. “High loads and demanding duty cycles put a lot of pressure on equipment. We’re happy to report that our clutches have been operating well since their installation 18 months ago.” With construction of the Palm Deira set to continue for the best part of a decade, Van Oord’s vessels will continue to provide a tough testing ground for Wichita clutches for years to come.