After spending money on a powerful new pump and the motor to run it,the next big decision is how to connect the two in a way that maximizes their efficiencies and protects them from normal wear and tear.

Coupling the driving and driven shafts would be simple if they were perfectly aligned, machines did not vibrate and the shafts never actually moved. In the real world of power transmission, however, a flexible coupling can accommodate for the flaws and dynamics inherent in most systems.

“Even if you can get the shafts aligned perfectly, you are doing it when the equipment is not actually running,” said Paul Konkol, Marketing and Business Development Manager, Industrial Couplings, for Altra Industrial Motion. 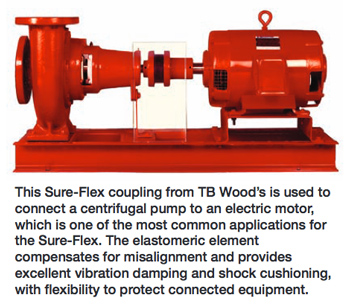 “Once things start moving, temperatures change, operating conditions change, foundations settle. So you need a coupling, but not just any coupling. You need the right coupling, in the right size, for the right pump application.”

The basic function of all couplings is to transmit power, accommodate misalignment and compensate for axial movement (end movement of shafts). Sometimes, a coupling is asked to absorb shock or vibration. Selecting the right coupling depends on four basic conditions of shaft misalignment or movement.

Four basic conditions of shaft misalignment or movement that determine selection of the correct coupling.

The basic construction of the most flexible couplings consists of two flanges or hubs, which attach to the shafts being coupled, and a connecting element that may be metallic (such as in disc couplings), or a sleeve made from elastomeric material such as EPDM rubber, neoprene, Hytrel or urethane, or a mechanical connection (as in a
u-joint or gear coupling).

To be considered flexible, a coupling must handle parallel and angular misalignment. Couplings with four-way flexibility accommodate both end float and torsional movement.

One example of a four-way flexible coupling with good torsional flexibility is an elastomeric coupling that operates in shear (as opposed to compression). The elastomeric flexible member can deform or stretch in shear, displacing under a load. The amount of torsional displacement or elastomer “wind-up” is a measure of the shock that can be absorbed. It also compresses easily and stretches to handle end float. 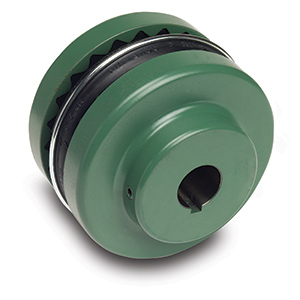 The torsional flexibility allows the elastomeric shear coupling to dampen the amplitude of vibrations, isolating one shaft from the effects of the other. The energy absorbed during shock loads is essentially used to wind the elastomer in a twisting action. Since the force of the shock from the motor is reduced by the amount of energy expended in winding the flexible member, the pump shaft is cushioned from the shock. This energy is then released back into the drive system as the coupling unwinds.

“Couplings that use the elastomeric material in compression do not have the same amount of misalignment capacity or axial or torsional dampening capabilities as when you are running them in shear,” said Konkol. “In compression, you are squeezing the rubber to transmit torque, rather than twisting it. 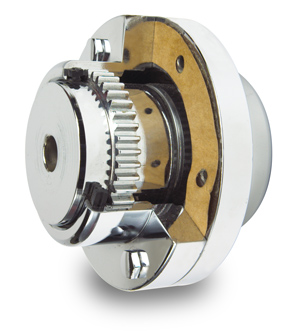 “Gear and grid couplings are excellent with higher torques, but as with anything, when you make gains in one area of design, there are things you have to give up in other areas,” Konkol said. “In this case, it is torsional dampening. These are stiffer couplings so more vibration is going to be transmitted through to the pump.”

Gear couplings are constructed with a sleeve containing internal teeth that mesh with teeth on the outside of the hubs. Popular for both high-speed, high-horsepower and high-torque, low-speed applications, they work well in applications that require torsional rigidity. 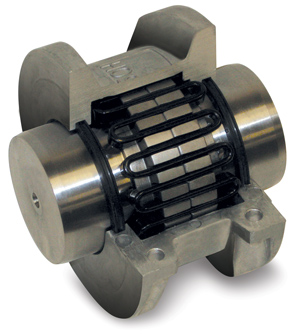 The fit of the teeth in a gear coupling allows for misalignment, but the degree of angular misalignment compensation depends on the contour of the gear teeth and the clearance between them. Because of their design, these torsionally stiff couplings can withstand some shock loading, but they cannot absorb significant amounts of it.

Grid couplings consist of two grooved flanged hubs connected by a tapered steel spring in the form of a grid. Like gear couplings, they require lubrication, but allow for flexibility and efficiency at high speeds or at low speeds with high torque. Grid couplings can operate up to 400 hp/100 rpm. Being more rigid, their misalignment capabilities are not as great as elastomeric couplings, so alignment of the motor and pump shafts is more critical. 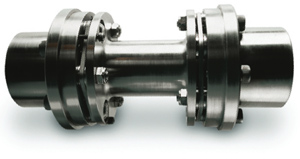 Disc couplings are extremely uniform in design and can rotate at high speeds. Pumps operating at high RPMs are good applications for these well-balanced, smooth operating devices that, like elastomeric couplings, require no lubrication. Disc couplings, however, are quite complex designs and are extremely sensitive to misalignment and axial movement. Flexing of a disc or metallic component beyond its yield point can cause fatigue, and axial movement can cause failure.

With coupling selection, pump users should beware of the trap that “more is better.” Oversizing a coupling can result in a reduction in needed flexibility or misalignment compensation, and a coupling that is too large can put additional stresses on the pumps and motors being coupled. On the other hand, a coupling with too much misalignment capacity may be too soft or compliant, which can cause vibration or an unbalanced condition in rotation.

“For turbine-driven equipment running at 3,000 rpm or higher, you may want a disc coupling,” Konkol said. “For high torque, a gear or grid coupling may be the right choice.

“It is all about putting the right coupling in the right application, so that is where the manufacturer can be a valuable asset in the selection process. That engineering knowledge base can be a real value-added service to the user.”