At an integrated steel mill in the Midwest, the slab caster is more of a tortoise than a hare. Segment rolls on the curved roll section that move the steel slabs, rotate at a speed of only 8 RPM (5ft./min.). But it's the reliability of the motion, rather than the speed, that wins the race to productivity. Improvements to the slab caster at this facility are yielding positive results by reducing costly downtime in the harsh environment of this 24/7 operation.

The improved reliability of the slab caster is provided by Ameridrives U-joints, which drive the segment rolls that form, move, and hold the steel slabs as they advance through the caster. The molten steel is poured from a ladle positioned about four stories above the mould. As the steel moves vertically between the rolls, the steel is formed into slabs that are 8 to 10 inches thick and 48 inches wide. 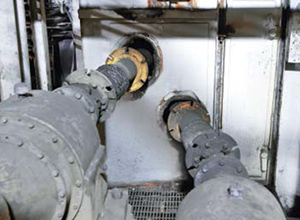 Dual to the tight configuration of the dual drive train, the Ameridrives U Joints needed to compensate for a approximately 10 degree angular misalignment to connect to the drive end rollers positioned in the segments.

The U-joints perform a critical function. As the liquid steel is poured into a mould to form a slab, the U-joints are essential to controlling the motion of the slab and holding them in place. If one would slip, it would be devastating.

On the slab caster, a paired set of driven upper and lower segment rolls are housed in each segment frame. A total of 11 segments are positioned approximately 24 inches apart along the length of the curved roll section of the caster. The segments are equipped with a motor and gearbox drivetrain on alternating sides of the slab to allow closer, adjacent positioning. Due to the tight configuration of the dual drivetrains, the Ameridrives U-joints are needed to compensate for an approximately 10-degree angular misalignment to connect to the drive end rollers positioned in the segments.

The U-joints are also required to function reliably in tough operating conditions that include: temperatures up to 1,500˚F, high-pressure water spray used to knock slag off the slabs that forms as the steel cools, and high shock loads of up to 800,000 in.lb. torque. The slab caster operates continuously for 24 hours a day, from three to fourteen days, depending on steel production requirements.

Loose bolt connections allowed the key to shift causing the keyway and holes to become elongated in the mated flanges.

The U-joints used in this demanding application are Ameridrives Power Transmission Model U-3285, which feature a closed-yoke design. They were installed to replace units designed with split-flanged yokes. The problem with the split-yoke design was that the caps would either come loose from bolt fatigue or fail at the root of the yoke, causing the cross and bearing kit to eventually shear or snap under torque strains.

The Ameridrives U-joints also feature integral tapered face keys on both the motor and the drive ends. The motor ends of the U-joints are easily accessible, allowing maintenance crews to fully tighten the eight mounting bolts.

The driven (segment) ends of the U-joints, however, pass through the sidewall of the segment frame and are positioned within 12” of a heat/water wall. The tight space constraints of the segment frame do not allow full access to the roller end of the U-joints. This resulted in mounting bolts that could not be tightened to the torque specifications. 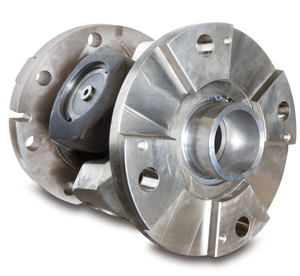 For the roller end of the U-Joint, Ameridrives Power Transmission developed an integral tapered key of face pad design which features four raised, wedge-shaped keys and requires only four mounting bolts versus the typical eight-bolt design.

Over time, the loose bolt connections between the spool and flange yoke (driven end) allowed the key to shift, causing the keyway and holes to become elongated in the mated flanges. This caused premature wear on the segment rollers, segment bearings, and flange yokes, resulting in uneven torque loads being transferred to other drives which over-torqued the next immediate segment, eventually causing the cross to fail within the flange yoke assembly.

When one segment roll is not driving, it can cause skidding, which creates uneven thickness and/or uneven marking on the slab, eventually causing problems in the slab finishing process. As a result of a cross failure, the slab caster needed to be shut down, allowed to cool (twelve or more hours). Then the damaged U-Joint would be repaired, typically by replacing it with a spare. In some cases, slabs would have to be stopped, causing them to cool inside the caster, which required the trapped slab sections to be cut out and removed. 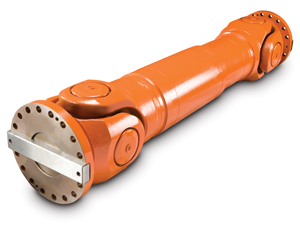 “The new design makes it easier to connect the U-joint to the segment roll spool, while allowing the torque to be transferred to the wedged cogs.” said Kurt Hansen, Ameridrives Couplings Steel Market Specialist. “Our extensive U-joint experience with steel mill applications allowed us to design a creative new facing connection that solved the customer’s dilemma. With the new reliability of the U-joint solution, the customer’s up-time is greater and slab quality has improved.”