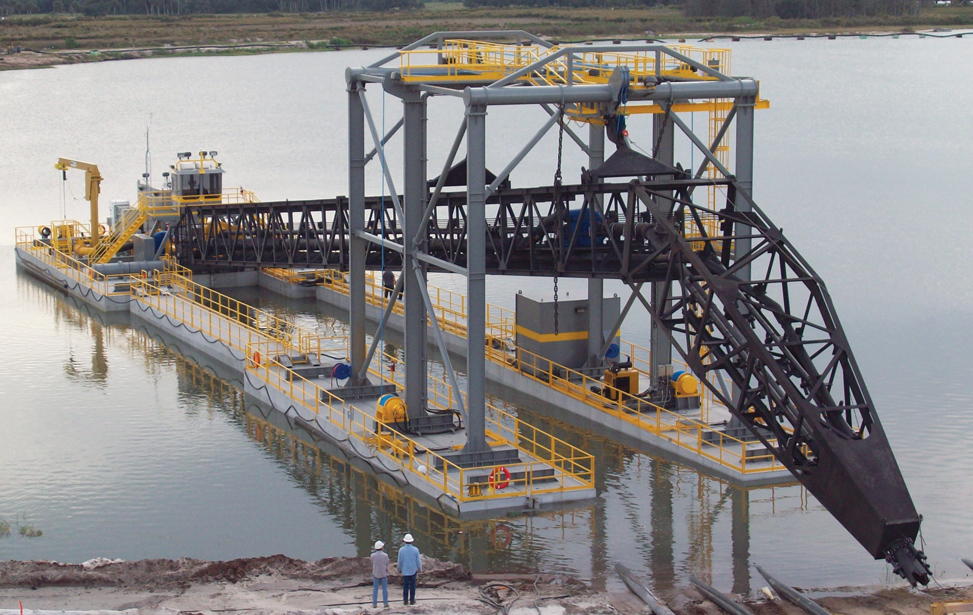 The world’s deepest mining dredge is coupled with the longest drive train ever to reach the bottom of an underwater sand mine.

In underwater sand mining, as with any problem-solving effort, getting to the bottom of it is the ultimate goal.

So when the Florida Rock Division of Vulcan Materials considered that they were nearing the end of their capacity to dredge the depths of one of their deepest underwater sand deposits, they considered they might need a clamshell-style dredge - rather than their preferred style of underwater pump dredge - to get to the bottom of it.

No one in the world, to their knowledge, had ever built such a large suction dredge.

In late 2005, Vulcan contacted Dredging Supply Co. of Reserve, LA to discuss building a clamshell dredge that could take the underwater mine depth from 70 feet to 200 feet, allowing another 40 years of underwater sand mining. Dredging Supply had another idea.

"We floated the idea of building them an underwater suction pump dredge and their question was...at 200 feet, has it ever been done before," said DSC President Bob Wetta. “To our knowledge, it has not. We’ve built dredges that go to 120 feet, so this was quite a stretch, but we were not at all afraid of the concept. We figured, this one is just a little bigger.”

After a year of design engineering - four times the development time of a typical dredge design – DSC began building the deepest hydraulic mining dredge in the world.

Following another year in construction, the 300-foot structure was completed in March, disassembled and shipped in pieces aboard a convoy of 23 tractor trailers. Launch and commissioning of the new DSC Marlin floating dredge was completed in May and the dredge began its anticipated 40 years of uninterrupted service.

The dredge is able to excavate, suction and pump to the surface 250 to 300 cubic yards of sand per hour. The sand is transported to the shore of the “pond” through 16-in. OD high-density, polyethylene piping in a slurry of water flowing at a rate of 8,500 gallons per minute.

The sand is excavated at the bottom of the pond by high pressure water cutting jets. Excavated sand and water is suctioned by an underwater pump, driven by the longest drive shaft ever built in the dredging industry, with a secondary booster pump on the hull of the dredge.

Several design challenges were addressed in re-engineering DSC’s Marlin model dredge to achieve a 200-foot mining depth, according to Damon Gonzales, DSC Director of Engineering. In fact, Wetta said Gonzales has a list of challenges that would take a year to discuss in detail, ranging from excavation issues to cave-ins, to designing the framework of a superstructure that could support the massive boom.

Of major concern was deflection of the 265-foot long boom structure, called a ladder, that supports the piping, the cutting head at the end of the ladder, the underwater suction pump and the drive shaft that connects the 600 HP electric motor on the hull of the dredge to the underwater pump.

"Any ladder structure of that length is going to deflect quite a bit,” Gonzales said, “and of course, the weight of it was a big issue too. The ladder had to be designed as sturdy as possible so it wouldn’t deflect and deform under normal circumstances, so we ended up changing the geometry and structural members of the truss sections a number of times."

Using a combination of modeling software - ALGOR Finite Element Analysis - and beam analysis software, DSC dedicated one full-time engineer to the year-long design, joined at times by up to five other engineers from both DSC and Vulcan.

TB Wood's Form-Flex couplings were specially modified to run in the vertical position required in the dredging operation, and special long, taper lock mounted hubs were designed to allow easy field service including axial adjustment at the pump end.

"For DSC and for the dredging industry as a whole, this is a truly amazing feat - a very impressive machine," Wetta said. "We coupled six drive shafts together for the underwater pump drive line, which has never been done in our industry before."

TB Wood’s Product Manager John Malik concurred: "To my knowledge, five sections is the longest train of drive shafts we’ve supplied in the 23 years I’ve been in the business. I don’t recall hearing of any larger projects, and you usually hear about things like that."

Some designers, Gonzales said, are still using solid shafting and sleeve bearings as a means of driving a piece of underwater equipment. However, maintenance of the sleeve bearings in an underwater application is difficult, and the bearings themselves add significant weight to the overall structure. The tubular Form-Flex couplings and special hub design solved both the maintenance and weight issues.

"What happens is that when the ladder deflects, which is unavoidable, it pulls the drive shaft with it, causing it to deflect. When a solid rotating shaft is deflecting, it creates a whip. So we’ve been able to circumvent that problem with the Wood’s couplings," Gonzales said.

For this application, TB Wood’s specially designed a customized hub with a unique flange disc pack and tapered bushing mounting to facilitate ease of installation and adjustment to the underwater pump impeller. Because of the abrasive material being pumped, axial adjustment of the impeller is necessary when it becomes worn down.

"One of the reasons we selected the TB Wood's couplings was because of their ability to handle parallel offset and angular misalignment – and quite a bit of it,” Gonzales said. “They’ve done some things with the hubs  that have worked really well for us. They're the guys to call when you need a coupling engineered to your design. The thing we like most is the support we know we have from the strong engineering team at Wood's."

Long service life of the couplings and other critical components was also an important issue, as the dredge is designed to operate until the year 2049, Wetta noted.

"This dredge will be in the pit for a long time and since you will not be able to access any underwater connections, we designed all of the pontoons so they would be bolted together above the water surface," he said.

Another solution DSC adopted to extend the dredge’s service life was to replace their typical painting process with a metallizing process in which they sprayed a molten aluminum coating on the hull. Studies conducted by the U.S. Army Corps of Engineers indicate the aluminum metallizing process provides a 40-year coating.

"This Marlin dredge, we hope, will be the shining star for aggregate producers who are having more and more problems getting permits for new mines," Wetta said. "What we’re hoping is that people will look at this and say, ‘Wow, if you have a deep deposit of fine sand, that’s the kind of machine you need to mine it. It’s fun to look back - at what started out as doodling on a napkin - and say you did a good job for someone." In 40 years, perhaps, when this dredge is decommissioned, someone will look back and realize that all the deepest underwater sand mines were made possible by the pioneering DSC Marlin and its TB Wood's Form-Flex drive train.