Most of us probably never notice the spinning cylinder mounted between the pump and motor, except how easy it is to dis/assemble when a pump or motor is changed out. Otherwise, the disc coupling never factors into our daily routine.

While maintenance-free couplings can be ignored for decades, knowledge of how a disc coupling works and how different designs fit best with different applications will help in choosing the best coupling for the job. After all, a disc coupling’s job is to protect expensive connected equipment, so it is essential to have the right disc coupling.

Why a disc coupling?

For dozens of general industrial applications, and many specialized applications, a disc coupling efficiently transmits torque, accommodates misalignment and compensates for end movement between driving and driven equipment.

Disc couplings offer precise positioning with zero backlash, even in rough or reversing applications. They can transmit high torque loads with power efficiencies of 99+ percent, long operating life (typically from 20 to 30 years), no maintenance, precision balance, and in some units, the center spacer can cover long spans.

Obviously, the application dictates the requirements of the disc coupling, so always consult a coupling engineer to ensure an optimized coupling selection.

Disc couplings come in two basic styles: the Traditional style and the Drop-In style, typified by the TB Wood's Torsiflex. The Torsiflex coupling, which is one of the leading general purpose disc couplings in the world, was originally designed by Bibby Transmissions, a sister Altra Industrial Motion company. 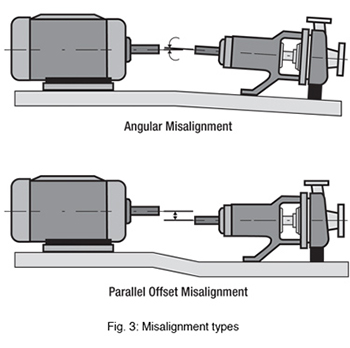 The basic functions of a flexible coupling are to transmit power, accommodate misalignment and compensate for end movement.

Transmit Power – Generally power loss from driver to driven component is small, especially with disc couplings that are nearly 100 percent efficient. Torque at a speed [T (LB.IN.) = HP x 63,025/RPM] varies widely, of course, depending on size and design features, but disc couplings are typically among the most power dense of the flexible couplings used in general purpose applications.

Accommodate Misalignment – Disc couplings excel at compensating for both angular and parallel offset misalignments (Fig. 3), and each manufacturer will provide specifications for individual units. However, disc couplings are not like common elastomeric coupling types where a single flexing element accommodates all types of misalignment. 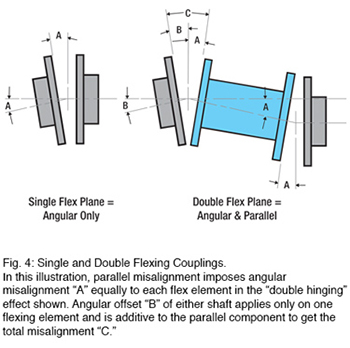 Compensate for end movement – The ability to compensate for end movement (Fig. 5) is noted as the "Free End Float Rating" in coupling catalogs. All couplings are suitable for use with electric motors. However, some units such as TB Wood's Torsiflex and Form-Flex models meet NEMA end-play standards for sleeve bearing motors without the use of limited end float (LEF) devices. 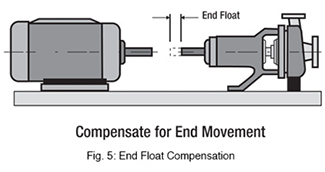 Nuts, Bolts and Discs: How It Works

With disc couplings, the bolting arrangement between the two outer hubs and the inner spacer is an important design feature. Three (or two, or four) holes are bolted to the driver hub, and an equal number are alternately bolted to the driven hub. Between hubs and spacers are flex discs, otherwise known as disc packs, flex elements, flex blades or flex packs (Fig. 6). Whatever you call them, it's important to know that the individual blades are not “shims” that can be removed to adjust for equipment spacing variations. 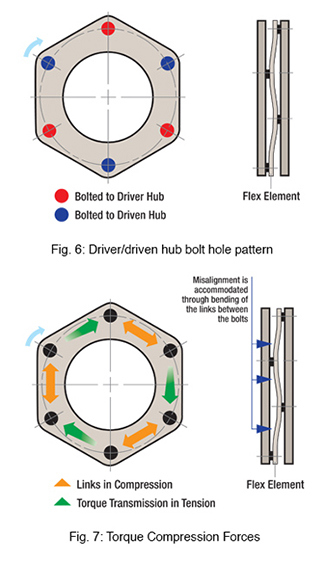 Torque is transmitted in tension through half of the links of the flex discs. A link is the metal area of the flex disc between the bolt holes (Fig. 7). The remaining links operate in compression and are generally not considered in the ratings. Which links are in tension versus compression is determined by the rotational direction. The compressed links tend to buckle under load, so flex discs are commonly "pre-stretched" at installation to allow the compressed sections to relax to neutral under load as they are compressed.

Pre-stretching is accomplished by drilling the bolt circle diameter on the mating flanges larger than the flex element. Pre-stretch, along with precision tolerances and fits, can make assembly difficult. Unitized flex packs, however, are easier to work with, as are drop-in style factory assembled couplings.

Bolts are the proverbial lynchpins. Most disc couplings designed for process pump applications use six-bolt discs for small to medium sizes while eight-bolt discs are typically used for larger sizes.

“The starting point for any disc coupling design is the bolting,” said TB Wood’s Couplings Engineer Matt DeFord. “For optimum operation, the bolts should be sized such that, for normal operating conditions, drive through the disc and flanges is in friction, rather than shear. Torsiflex and Form-Flex couplings use large, high-strength alloy steel bolts. With these, we can clamp the blades together harder to prevent fretting and premature failure.”

“Driving in shear with smaller bolts rather than in friction can increase the risk of bolt failures. While it may be fine for centrifugal pumps or other smooth loads, these designs are not as robust for applications with more torque fluctuation.”

Straight-sided and scalloped flex discs are the two most commonly used blade types (Fig. 8). Round discs are still commonly used in many older coupling styles. Straight-sided discs are stiffer torsionally. With these designs, less pre-stretch is required than with scalloped designs because there is less torsional windup under load. Because less pre-stretch is required, straight-sided discs are somewhat easier to assemble. Each is suited to particular applications, and stress analysis through FEA (finite element analysis) has given us useful tools to compare the two.

Scalloped and profile discs are “stress optimized” by removing low stressed areas of material (Fig. 9). They are lighter and have lower stiffness; however, the edge stresses are greater, which requires a better edge surface finish to minimize stress concentrations where a failure could initiate.

High stresses in the midpoint on the scallop design require surface finishes achievable only through costly EDM machining or by adding costly finishing operations. Stampings are not recommended for scalloped discs. Because of the relatively high cost of EDM processing, scalloped discs are best suited to custom/high speed applications, rather than in low-cost, general-purpose couplings.

FEA analysis has shown that material can be removed from the area in the middle of the span between bolt holes without affecting the disc’s ability to handle axial (Fig. 10) and angular (Fig. 11) misalignment, so straight-sided and scalloped discs perform equally.
However, straight-sided discs are better suited to fluctuating and reversing loads commonly found in general purpose applications. Torque requirements can be a deciding factor in disc style selection.

Analysis shows that centrifugal stresses are lower in the scalloped designs (Fig. 12). Centrifugal stresses can become significant at speeds which are much higher than standard motor speeds, which is another reason why scalloped elements are preferred for custom/high speed applications.

It is commonly thought that when scalloped discs fail, they fail in the center section between the bolts and not at the flex point near the bolts. In general, they do not fail this way. Scalloped discs offer more uniform stress distribution under purely torque stresses, but most of the stress in a flex disc is due to bending or misalignment. FEA analysis shows higher working stresses in the scalloped disc between and near the bolts, and failures should typically occur at the flexing points near the bolts. Failure in the center of the disc may be more related to stress concentrations resulting from the manufacturing process than to the application conditions.

Overall, the conclusion of the stress analysis is that straight-sided blades are a cost-effective solution for high torque, variable or reversing loads, which makes them suitable for the majority of general purpose, process pump, fan and compressor applications, as well as many critical/high performance applications.