After salt has been extracted from subterranean deposits by solution mining, the resulting salt domes offer storage space for products such as natural gas and ethylene. Pumping those products into and out from the domes sometimes calls for unique compressor couplings. That was the case at the PetroLogistics, LLC natural gas storage facility in Plaquemine, La.

The salt dome, 2,000 feet below ground, features multiple wellheads and multiple pockets where PetroLogistics stores products including natural gas, ethylene, and ethane. The company will pump natural gas into part of the salt dome during periods when gas demand is low for electrical power generation. When demand is high, the gas will be withdrawn using cavern pressure, into the interstate gas system for sale.

Since it is located in the Louisiana Mississippi Delta, the facility required considerable engineering to ensure that it would function properly in a less than favorable soil environment.

"The largest coupling ever designed by TB Wood's transmits 10,000 HP to drive compressors that safely pump natural gas into and out of Louisiana salt dome facilities operated by PetroLogistics, LLC."

Failure not an option

This flexibility required detailed dynamic reviews to ensure these units would not create any transient vibration/dynamic problems. The PetroLogistics engineering team put considerable effort into ensuring that the electric motor rotor material and rotor dynamics were correct for both motor speeds.

Two Dresser-Rand 4HHE-VL compressors had been rebuilt and modified to meet PetroLogistics' performance requirements. The compressor components are precision balanced. They feature 12 in. diameter cylinders with a 16 in. stroke. Each compressor will utilize 9,800 HP for compression during the final gas injection operation. Maximum surface injection pressure will be about 2,100 PSIG.

A coupling failure is not an option for the PetroLogistics team. A coupling failure, at a minimum, would wreck the compressor train and has the potential for causing catastrophic damage. And because the compressors used at the Plaquemine facility are not readily available, any damage to them would result in long-term capacity reduction at the facility.

After PetroLogistics had selected its power and compression equipment for the application, they then set out to couple them.

Several coupling manufacturers were contacted to evaluate their abilities to provide the required couplings to connect the motors and the compressors. Ultimately, the PetroLogistics team determined that TB Wood's/Ameridrives had the resources and desire to work with them to develop and produce a coupling to meet their very stringent requirements. The decision was also influenced by the fact that PetroLogistics had worked with TB Wood's previously and they had provided a quality product.

The design team involved personnel from PetroLogistics, torsional analysis consultants and TB Wood's. As a member of the Altra Engineered Couplings Group, TB Wood's drew on their extensive coupling design experience as well as that of Ameridrives and Bibby. 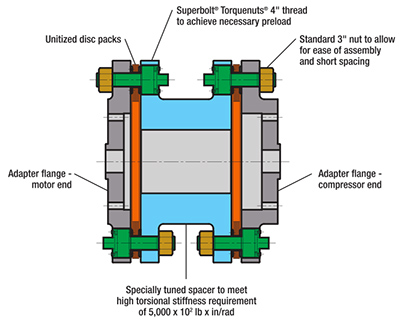 "Due to the high horsepower and low speed, we knew that none of our standard couplings would fit the application," said DeFord.

For this project, TB Wood’s engineers worked with torsional vibration analysts at Southwest Research, Inc., to develop the required coupling. After a full torsional vibration analysis of the entire system - compressor, motor, coupling, and piping - it was determined that the resonant frequency of the system was at the running speed, which is already very low. The coupling stiffness had to be increased in order to torsionally tune the system. The results of the analysis showed that the coupling’s torsional stiffness had to be increased to an astounding 5.0 x 10^9 in. lb./radian.

"So we started from scratch and designed a coupling using design principles from our new Turboflex GC line of gas compression couplings," said DeFord. Original application data suggested a 5.5 million in. lb. rated coupling. "Due to the stiffness requirement that the torsional analysts provided, we had to keep going larger and larger in diameter, and actually went through two iterations but ended up with a 10 million in. lb. rated coupling and a 36 in. diameter bolt circle," he said.

Another big factor in the stiffness is the flex packs and hardware. To design this coupling, DeFord employed proprietary design formulas and software, and Finite Element Analysis. The combined application engineering knowledge and advanced technologies of Altra Industrial Motion’s Engineered Couplings Group came into play. TB Wood's, Ameridrives Couplings, and Bibby Transmissions, all contributed to the coupling development process.

The resulting coupling is the largest TB Wood’s has ever built. It has a 44.5 in. outside diameter, and weighs about 10,000 lbs. The 10-bolt coupling design has 3 in. threads. "We incorporated Superbolt® Torquenuts® so the coupling bolts can be torqued with a standard half-inch drive torque wrench, instead of asking our customer to torque a 3 in. nut to 24,000 ft. lb.," said DeFord.

Safely and reliably transmitting 10,000 hp is no small matter. Add to this the stringent dynamic requirements, and the coupling design takes on significant/major importance. TB Wood’s/Ameridrives worked closely with PetroLogistics to ensure that the couplings would meet the power transmission and torsional dynamic requirements.

The 'final product' has proven itself in the 'real world' with no performance issues, according to PetroLogistics, TB Wood's/Ameridrives had the resources to work closely with them to develop and produce a coupling to meet their very stringent requirements.

DeFord at TB Wood's said the project led to more available options for customers. "Now that we have the disc pack and hardware designed, it's an available size for us to use if a customer ever needs a coupling with such a high rating," said DeFord. TB Wood's has also designed and built several couplings with over 2 million in. lb. ratings for other special applications. "The large torque requirement is not real common, but we're prepared to custom design the couplings to meet our customer's unique specifications," said DeFord.