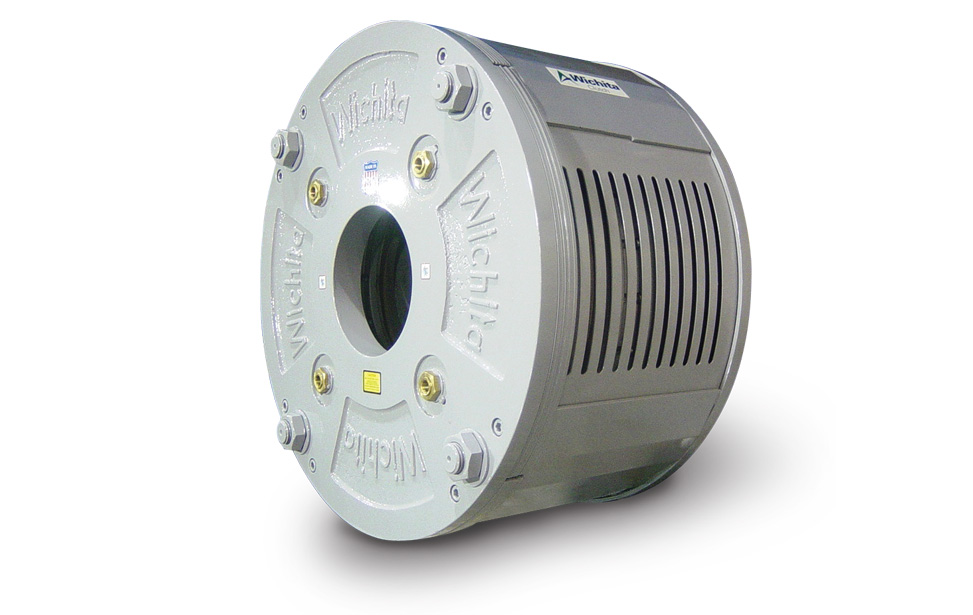 A new design of composite water jacket that enables seawater to be used to cool tensioning brakes has enabled Wichita Clutch, an Altra Industrial Motion company, to revolutionise the operation of marine-duty water cooled clutches and brakes used for tensioning on offshore oil and gas platforms and in other heavy-duty applications.

The new composite design enables Wichita’s AquaMaKKs clutches and brakes to be cooled either with salt water, or water with high acidic PH levels. Prior to its development, the industry standard was to use cast iron water jackets, alternating with copper wear plates, to dissipate the high heat generated in heavy-duty tensioning applications. In marine environments, however, salt corrosion created maintenance issues that necessitated too-frequent repair or replacement of the cast iron water jackets.

The composite material used in the new water jackets was developed by Wichita engineers working in conjunction with a partner firm. Several polymer combinations were tested before selection of the high-tech blend that satisfied the essential design requirement: which was to be as strong as the original iron parts’ and match their typical design stresses. In the event, structural testing couldn’t cause a failure in the AquaMaKK’s 36-inch diameter composite water jacket, even when the part was stressed to more than four- times its maximum design load.

Further testing, to determine the longevity of the composite jackets has been ongoing for two years at Wichita’s engineering test lab. This has proven that the composite water jackets are at least as long-lived as the cast iron jackets, while also providing superior corrosion resistance in off-shore applications.

In addition to material selection, the most difficult technical challenge in redesigning the AquaMaKKs was to design the water porting in and out of the composite water jacket. Initially, because composite materials can be moulded into threads, it was thought the water porting could be built into the base material; however, this configuration failed to offer the robustness required in the industry. Finally, Wichita engineers achieved the necessary robustness by designing metal threads (male and female), which are moulded into the composite material.

While patents are pending for the use of the composite materials, patents have already been issued for the water flow configuration which is the performance heart of the Wichita Clutch water jacket. “The patented water jacket flow design provides a balanced water flow in the water jacket to efficiently remove heat being generated by the friction materials running against the copper alloy,” said Mark Stuebe, VP & General Manager, Altra Heavy Duty Clutch Brake Group. “The balanced flow is designed to match the heat being generated on a swept area in a multi-plate. What this means to a user is that a Wichita water-cooled unit can absorb more heat than a comparable competitive unit when it’s supplied with sufficient cooling water.”

Also, since the composite material is a thermal insulator, the cooling water moving through the composite water jacket picks up more of the frictional heat compared to an iron water jacket. Thus, the surrounding parts in a unit remain at cooler temperature, which contributes to longer life.

As well as their anti-corrosion benefits, the Composite water jackets offer an additional benefit of weight reduction, with some units weighing at least 50+% less than the iron jackets. For example, the 36-inch AquaMaKKs cast iron water jacket weighs 375 lbs. While the composite water jacket weighs only 90-96 lbs. This is significant in the multi-plate (friction disc) design in which each of the copper friction discs requires two water jackets – one on each side of the disc. Depending on the braking/holding requirement of the application, some units may have up to four discs and eight water jackets.

On the large 36-inch diameter units, the copper plates themselves may be 3/8-inch thick and weigh 1141bs. Thus, on a unit with four discs and eight water jackets, the total weight of discs and cast iron jackets can reach nearly 3,500 lbs. With composite water jackets, discs and jackets on the same unit weighs less than 1,200 lbs.

Offered in three diameter sizes – 19-inch, 25-inch and 36-inch (friction lining O.D.) – the AquaMaKKs provides up to 3400HP heat absorption, which is 35% higher than the most robust units previously constructed for heavy duty applications. To date, AquaMaKKs units with new composite water jackets have been supplied in 25inch and 36-inch sizes to Oil States Industries (Skagit-Smatco) and National Oilwell Varco’s Amclyde Division, for off-shore mooring and positioning applications. They have also been installed in oil and gas drawworks applications.

“Results have been good in the field,” commented Mark Stuebe. “We’ve seen only positive performance differences. The real advantages will show in a few years when the iron water jackets would typically need to be refurbished or replaced due to corrosion. The composite water jackets won’t have any corrosion and will most likely remain in service.