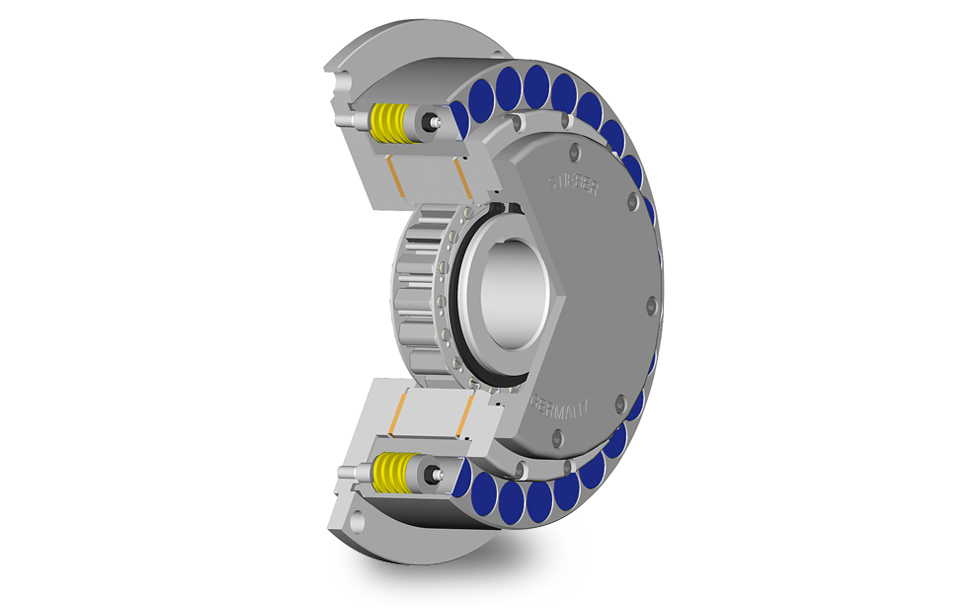 Stieber Clutch has expanded its range of load sharing backstops with the introduction of the RSRT releasable backstop. In the event of a blockage, belt jam or overload, the release facility allows the stored energy to be released in a controlled manner, enabling personnel to work on the belt after an incident.

Built on Stieber’s decades of experience in providing backstops for demanding conveying applications such as in the mining industry, the RSRT is a centrifugal lift off sprag type backstop with an integral torque limiter and release-under-load function. It has been developed for use on the high speed or intermediate shaft of the driving machines in multi-drive systems such as on large inclined conveyors, where two or more backstops share the reverse load.

The mechanical release function allows the tension of a jammed belt to be released through an internal hydraulic system. The release is performed using a simple hand pump to actuate the hydraulic cylinder, progressively releasing the backstop. When the oil pressure is released, the backstop is automatically re-set to the original slipping torque. The operation can be controlled and halted at any time, helping to boost productivity. Where multiple backstops are employed, these can be linked and operated simultaneously from a centralised control location.

The integral hydraulic system is protected against temperature fluctuations.

In order to allow the unit to be released under torque, the complete backstop must be able to rotate backwards, from as little as a fraction of a rotation to as much as several rotations. The RSRT enables this thanks to bearing support of the outer race. This bearing allows rotation without interfering with the slip torque and without damaging the centring device as would happen with the conventional centring spigots that are generally used for a fixed unit.

Backstops are often selected for the worst-case scenario that may only happen very rarely, if ever. However, should the backstop be called upon even after a long period of inaction, it is vital that it is ready to perform as intended. The friction linings of the RSRT are lubricated throughout, providing a consistent coefficient of friction even after long periods without slippage. Further, the contacts between linings and pressure plates are not affected by contact corrosion or oil contamination.

By employing load sharing backstops, users can select smaller backstops than would otherwise be required to cover belt jams or conveyor overloads, with the selection based on the actual load and not on the motor stall torque.

RS series backstops are designed for high reliability and durability. Slipping torque is factory set to the customer’s requirement. A variety of standard models is available up to 300,000Nm hold torque. Units can also be customised to meet specific application performance needs.