It’s never easy to improve upon the performance and productivity of a high-quality brake system. But when Yale® Lift Trucks’ engineers embarked on the development of their Next Generation three-wheel truck series, select component suppliers were asked to come up with ways to challenge the status quo. 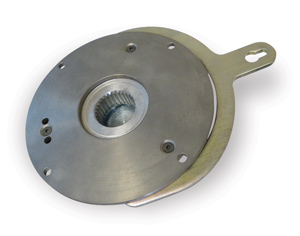 Yale engineers turned to Warner Electric, which has been supplying high-performance brakes and clutches to Yale for decades. Yale posed Warner with a new design question: could the PK-35 brake be modified to fit within a very confined space, and provide parking and manual release braking functions needed on in-line drive units for increased maneuverability and operational improvements?

“The PK-35 brake existed before this project,” said Mathieu Ruault, Warner Electric Forklift & Material Handling Market Manager. “However, NACCO Materials Handling Group (NMHG) engineering requested design parameters including: packaging, heat dissipation, and special manual release, that pushed us to come up with a completely new design. Therefore most of the brake components were newly designed to fi t 100 percent to the customer requirements.”

Warner Electric works with more than 30 customers in the forklift truck market on three continents. These customers are comprised of OEMs and Tier 1 manufacturers (motor/gear boxes), including six of the top OEMs worldwide. To support this market, Altra has developed a focused sales team covering the U.S., Europe and the Far East, supported by cross functional teams including design engineering, quality, and production. “Our customers value our global capabilities in terms of engineering, manufacturing, and sales support.” said Mark Falcone, Warner Electric National Account Manager.

That was exactly what Yale officials were looking for. Yale Materials Handling Corporation is part of NMHG and one of the largest producers of lift trucks in the world with 2009 revenues of $1.5 billion.

“Development was a fast-paced, short project schedule, during which time there were several issues we needed to overcome from a packaging and interface aspect,” said Matt Barrow, Yale Product Design Engineer. “Warner Electric and NMHG engineers worked together to review the existing brake and how to improve it for new required functions. The brake was looked at for environmental resistance – essentially for added protection from debris and moisture – and we asked Warner to incorporate a manual override function that was easily accessible and mechanically driven.” 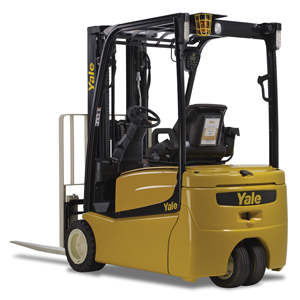 The design process involved the development of various prototypes. “Jeremy Raimbault (a Warner Electric Design Engineer) responded with a grand slam design,” said Falcone. “He developed an enhanced version brake featuring an enclosed design, special manual release handle, a dual voltage coil, and a lower profile. The final design was a team effort with NMHG and Warner engineering developing the most cost-effective solution that would provide the features and benefits that NMHG required for this special brake package.”

The brake design modifications were made through a rapid response process initiated by Warner Electric. “The main function of the brake is to lock the traction motor shaft when the truck is parked,” said Raimbault. “This is done by springs pushing against a moving armature, which is clamping a friction disc linked to the motor shaft. When power is applied to the brake, a coil acts as an electromagnet to pull the moving armature and to compress the springs. The disc is then free to rotate and the truck can start moving.”

The brake is mounted on the back of the traction motors, on the opposite side to the gearbox. There are two motors, back-to-back, with each one linked to the front wheels of the truck. “The brake needed to meet grade requirements, of course, per regulations,” Barrow said. “And it also needed to fit within a confined space on the end of the in-line traction motors. We were also looking for easy removal of the brake for servicing, without removing the drive unit or traction motor.”

Warner and NMHG collaborated in the testing of the new brakes, including testing prototype units in select field locations. Warner ran life cycle tests to simulate the brake life of the product, and conducted air gap tests along with pull-in/holding tests. The testing determined the air gap limits and demonstrated that the brake would pull in to release as required. It also factored in how temperature affected pull-in responsiveness and timing. The life-cycle test simulated a fully loaded truck traveling at certain speeds to test the dynamic braking capability and outcome of the brake assembly.

“Our test rigs are designed to simulate different braking energies with various speeds, to be as close as possible to the application,” said Raimbault. “This also allowed us to monitor the torque of the unit through the whole life of the friction disc. The brake included new features like the hand release lever and an enclosed design to prevent entry of environmental contaminants. These options existed on other forklift brakes, but were usually added at a significant cost. The redesign work challenged us to come up with a solution which allowed these features to be integrated the easiest way possible, allowing the design to remain cost competitive compared to the old version with these options.”

The newly modified PK-35 brake is an integral component on several different series of Yale and Hyster brand 3,000-4,000 lb. capacity sit down counterbalance trucks. It is also being installed on a series of three wheel stand trucks. All platforms use independent in-line drive unit motors for maneuverability, and are variations of 36V and 48V trucks. The new PK-35 brakes incorporate a manual override function that allows for easy vehicle towing in case the truck needs to be moved, with no need for additional tools or power sources.

“The time from project start date to production can be anywhere from two to three years, which includes mule truck testing, proto A build, proto B build, pilot production build, and production,” Falcone said. “Warner Electric was very responsive in each step, ensuring that special attention was paid to engineering details and that protos were delivered on time.”

“We worked diligently on the opportunity to supply the first generation 3WS truck brake,” said Falcone. “Yale engineering and purchasing were very pleased with our support and performance during the development process.”

“Warner’s design expertise and rapid response to resolving issues were important in this application, but of course, NMHG has had a successful working relationship with Warner for years and they understand our needs,” Barrow said. “Their response is always quick. Warner had knowledge of where we were starting and where we wanted to go.”

Warner Electric and Matrix International, both part of Altra Industrial Motion, have been delivering high technology, cost-effective braking systems to the forklift truck market for the past 60 years. “These activities were intensified starting in 2000 when Warner and Matrix developed a full range of Electromagnetic brake-products combined with hydraulic features in order to meet various customer demands,” Ruault said. Globally, forklift brake development at Warner Electric and Matrix International are customer driven. Sales have increased greatly over the last seven years, which has helped the company become the world leader of electromagnetic brakes supplied to the electric forklift truck market.