In 1850, to run the machinery and mills of the California Gold Rush, Lester Pelton invented the Pelton Wheel. Instead of the flat panels used in mills on slower streams, the Pelton Wheel was a landmark design using cups to harness the fast waters of mountain streams. Mines no longer depended on steam engines - and their exhaustible supplies of wood and coal - for the power needed to extract precious minerals from hard rock.

Fast-forward to 2011. Fossil fuels have dominated the world energy supply for nearly a century. They generate not only power but international conflict, because of limited sources.

Alternative power sources have offered promise, with wind and solar as the dominant alternatives. Yet these too have limitations due to environmental fluctuations.

But now, technology development of oceanic tidal turbines enters the mix and offers a sustainable source of socially acceptable electrical power. Still in development, the technology is on the cusp of emerging as a significant contributor to the global generation of electricity, and already, the first commercial scale prototypes are undergoing testing at sites around the globe.

Beneath the ocean waves, a new industrial boom akin to the development of the North Sea oil and gas industry is bringing new, secure energy supplies to a resource- and carbon-constrained world. At the dawning of a new era of powerful technology that is able to harvest renewable energy from the ocean’s tides, control of this powerful motion is critical.

Like Pelton in 1850, engineers at Wichita, Twiflex Limited, and other Altra Industrial Motion companies have adapted state-of-the-art technologies that enable today’s emerging tidal turbines to progress in the ongoing quest to supplant fossil fuels.

In essence, tidal turbines generate power as do wind turbines – by the rotation of blades powered by dynamic environmental forces. Though some turbine devices are designed to float, many of the turbines reside unseen on the ocean floor, and thus are aesthetically unobtrusive.

A decade ago, the UK Marine Foresight Panel opined that “if 0.1% of the renewable energy available within the oceans could be converted into electricity it would satisfy the present world demand for energy more than five times over.

Since then, innovators have worked out significant challenges, which has led to the installation of several full-scale tidal turbine prototypes off the coast of the UK to demonstrate the breakthrough potential of this enormously promising energy source.

In essence, tidal turbines generate power as do wind turbines - by the rotation of blades powered by dynamic environmental forces. Though some turbine devices are designed to float, many of the turbines reside unseen on the ocean floor, and thus are aesthetically unobtrusive.

This feature is a significant advantage over wind power alternatives, which are often viewed as intrusive to the landscape. Consequently, tidal turbines are seen as a more socially acceptable alternative.

Perhaps even more significant, at least from a technical and commercial perspective, is the advantage of environmental physics itself. Oceanic tides are predictable; unaffected by atmospheric fluctuations that afflict wind power, wave power and even solar power. Thus industry analysts can predict the amount of power that will be produced annually for the next several decades based on anticipated units and capacity.

Private industry and public agencies of the EU have led the way in the development of tidal turbine technology, with the United Kingdom leading the world in this emerging market. In recent years, the European Marine Energy Centre (EMEC) in Orkney, Scotland was constructed as the world’s first dedicated test center for commercial-scale tidal devices. It offers developers the opportunity to test full-scale, grid-connected prototype devices in unrivalled wave and tidal conditions.

Despite the intensive effort to establish proof-of-concept for a wide range of innovations in tidal turbines, a dominant technology has yet to be established. To date, four major types of turbines have been developed in addition to a variety of unique designs that demonstrate different characteristics and technology.

These turbines generate energy in a similar fashion to horizontal axis turbines, however, the turbine is mounted on a vertical axis.

A hydrofoil is attached to an oscillating arm and the motion is caused by the tidal current flowing along either side of a wing, which results in lift. This motion can then drive fluid in a hydraulic system, which is converted into electricity.

By housing the device in a duct,this design has the effect of concentrating the flow past the turbine. The funnel-like collecting device sits submerged in the tidal current. The flow of water can drive a turbine directly, or the induced pressure differential in the system can drive an air-turbine.

Altra Industrial Motion, as a leading multinational designer and producer of superior electromechanical power transmission components, has the technology and engineering capability to provide customized, state-of-the-art braking solutions for use on many types of tidal turbines. Altra’s demonstrated expertise in the wind power industry and other energy sectors perfectly positions its multiple brands to meet the challenges of this demanding marketplace, regardless of the design direction(s) this fledgling industry may take.

Driving the accelerating growth and capital investment in the tidal turbine sector is the forecast that, by 2030, 45 percent additional energy will be required to meet the needs of the world’s population, according to the European Ocean Energy Roadmap 2010 – 2050 produced by the European Ocean Energy Association (EOEA). Currently up to 67 percent of global electric consumption is generated by fossil fuels; the continuation of which could raise CO2 emissions by as much as 45 percent. 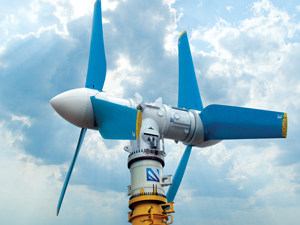 In March 2007, the 27 EU Member States adopted a binding target to obtain 20 percent of its total energy requirements from renewable sources by 2020. In January 2008, the European Commission drafted a Directive on the promotion of the use of energy from Renewable Energy Sources (RES) which contains a series of elements to create the necessary legislative framework for making 20 percent renewable energy a reality.

The Directive intends to maintain and strengthen the existing legislative frameworks for renewable electricity, which prescribes a balanced mix of the deployment in the sectors of heating and cooling, electricity and biofuels.

To reach the ambitious renewable energy targets set by the EU, it is indisputable that ocean energy will constitute a key element of the renewable energy mix. Exploitation of the vast European ocean energy resources are projected to enable the realization of 3.6 GW of installed capacity by 2020 and close to 188 GW by 2050. These key targets are expected to satisfy a full 15 percent of the EU energy demand. 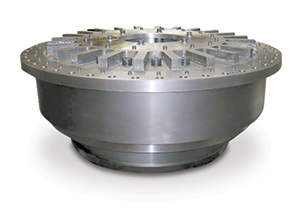 the unique Wichita HBS 42-14 wet brake uses oil shear technology as the torque generator and does not wear or create dust like a dry friction brake.

By 2050, the EOEA Roadmap anticipates that ocean energy could reach the equivalent of 100 nuclear plants. A number of EU Member States have created attractive financial incentives in terms of both revenue support and capital grants, and all the major utilities are engaged in the industry either by investing in technology or by committing resources to establish strategies that support the ocean energy industry.

The EOEA Roadmap recognizes that a new generation of full-scale ocean energy conversion devices will need to be installed and demonstrate their operational capabilities in the next few years.

Likewise, it underscores that a comprehensive research program to constantly improve the technical and economic performance of ocean energy conversion devices will support the industry development.

At the center of this aggressive R&D initiative are the critical components supplied by Altra Industrial Motion now being installed on prototype units at EMEC that are destined to emerge as industry leaders. Altra has become firmly established as the trusted source of tidal turbine marine-duty braking systems, including power packs and couplings.

Designed to generate power in nearshore estuaries, the Neptune Proteus 1000 is controlled by a pair of Twiflex VSKD-FL caliper brakes and hydraulic power packs

Altra’s initiation in the sector was to provide a Wichita braking solution for a 1 MW tidal turbine. That experience led to further innovations and, in July 2010, two Twiflex VKSD-FL brakes along with 1.4m disc, hub and electro-hydraulic power pack (EHPP) entered the water for final commissioning on the Neptune Renewable Energy Ltd. tidal turbine.

In August 2010, the Atlantis AK-1000 turbine, the world’s largest single-axis turbine to-date, featuring a custom designed version of the Wichita HBS 42-14 brake, was installed at the EMEC for testing and demonstration.

Functions of a Tidal Turbine Brake

There are three major functions of a tidal turbine brake – all are critical to the turbine's operation:

The Atlantis AK-1000 1 MW tidal turbine is the largest single axis in the world. The Atlantis turbine stands 75 ft. (23m) tall with a unique twin rotor set – 59 ft. (18m) diameter – to harness ebb and flow tides while generating 1 MW of power. These horizontal axis turbines are designed for open ocean deployment, positioned on the sea-bed, in the harshest environment on the planet – and they require precise stopping power.

The Atlantis AK Series turbine design lends itself to installation of a multi-plate wet brake on the rotor (low speed) shaft. The unique Wichita HBS 42-14 wet brake technology uses oil shear to generate the braking torque and does not create dust or debris like a dry friction brake. Since brake torque is transmitted through the shearing of the oil film, the friction plates never actually come into contact until relative velocity approaches zero; consequently there is very little wear.

For this environmentally sensitive project – a serious issue given the fully-submerged nature of the application – Wichita tested and approved the use of a bio-degradable synthetic oil as an environmentally safer alternative to traditional hydraulic oils. Further, since the turbine’s rotors turn at a very slow rate of 6-8 RPM, studies indicate the units present little hazard to marine life.

As the oceanic tidal turbine industry powers forward, Altra brands are perfectly positioned to provide solutions to the industry’s critical motion control requirements in an extreme environment, particularly since the industry has yet to settle on a leading technical strategy.

The Wichita torque limiting clutch is located between the gearbox high speed shaft and generator, and is designed to slip, protecting the drive system from excessive loads should the generator short-circuit. The torque limiting clutch features an integrated brake disc to mount two Twiflex spring applied calipers for emergency stop duties. The Bibby coupling provides misalignment capability and torsional damping.

Tidal power resources have been identified throughout the oceanic world; not just in the hotbed of the EU and UK, but also in Canada, the U.S., Asia, South America, Africa and Australia. Proof-of-concept, according to industry insiders, is only a matter of time, and the technology solutions already in place are shortly to be demonstrated.

Altra Industrial Motion is at the forefront of the leading technology solutions and is well positioned to dominate the motion control future of a renewable energy industry poised to replace the fossil fuel energy generation of the past.