Helping to Harness the Tides

Twiflex VKSD-FL ‘floating’ disc brakes have been installed on the large Proteus tidal turbine designed and built by Neptune Renewable Energy Ltd., which was formed in 2005 to develop intellectual properties in both tidal stream power and wave power projects in the UK.

In July 2010, after five years in development, the Proteus NP 1000 from Neptune Renewable Energy was towed into the Humber Estuary at Hull, England. The demonstrator is fitted with two Twiflex VKSD-FL caliper brakes and a hydraulic power pack that hold its vertical rotor in place for maintenance or in the event of a power failure. 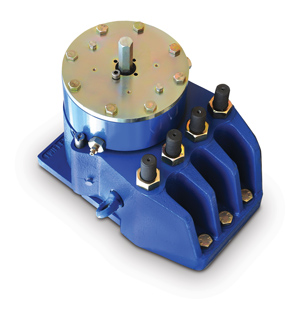 The turbine was developed for estuarine locations that can exhibit powerful currents, yet have the advantages of lower access, cabling and maintenance costs when compared with deeper water ocean locations. The unit is moored in the free stream, minimizing environmental impact while operating efficiently for both flood and ebb currents.

The Proteus turbine consists of a vertical axis, crossflow rotor operating at a speed of approximately 8 RPM and mounted in a 6m x 6m venture diffuser duct beneath a steel deck and buoyancy chambers. The vertical shaft connects to a 1:200 gearbox and generator in the deck housing. The rotor maintains optimal power output via computer-controlled shutters within the duct and through variable electrical load.

The Twiflex caliper brakes met Neptune’s key requirements for a floating brake with a high braking force that can be horizontally fitted. “It was very useful to have, essentially, a turnkey solution, as the totality of the Proteus design is extremely complex,” said Jack Hardisty, Neptune’s technical director. “Twiflex also provided clear electronic interface inputs for our SCADA system.” 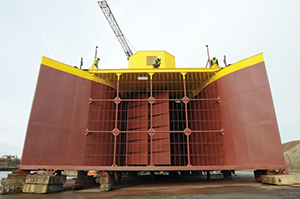 Designed to generate power in nearshore estuaries, the Neptune Proteus 1000 is controlled by a pair of Twiflex VKSD-FL caliper brakes and hydraulic power packs.

The Twiflex VKSD-FL disc brake caliper consists of a single spring module forming the ‘active’ side of the floating unit combined with a reactive side. It is ideal for use where space is limited, as in this application, or to accommodate axial disc float of ±6mm. Braking force ratings are achieved through a combination of different springs, shims and air gap settings. Two VKSD-FL brakes act on the vertical shaft-mounted disc, housed with the gen-set in the binnacle over the turbine shaft. The brakes provide both parking and emergency stop functions.

More than they asked for

While the initial request made by Neptune was for brakes, Twiflex engineers did a careful review and determined it
could provide a complete braking solution including the brake calipers, disc, hub and power pack.

“Our engineering team reacted quickly and efficiently to the original enquiry,” says Phil Harvey, UK Sales Manager for Twiflex Limited. “The requirement was for a high braking force, floating brake, horizontally fitted, and Twiflex was able to supply this.

In addition, we were able to offer engineering and application support,” Harvey said, “Because much of the turbine design was already done, including ordering parts, it was a big help that Twiflex was able to offer a brake that we already supply and required little, all be it some, customization.”

Twiflex Limited was founded in 1946, is based in Twickenham, England, and is now part of Altra Industrial Motion. Twiflex specializes in the design, manufacture and supply of advanced braking technologies for industrial applications.

There are three major functions of a tidal turbine brake, all of which are critical to the turbine’s operation:

1) Holding or parking brake function for when the turbine is to be inspected or parked due to impending flood tides.

2) Emergency stop – used only when there is power blackout and automatic control of the turbine speed is lost. One of Altra’s custom power packs includes a ‘soft-braking’ option in the design of the manifold slice, which allows deceleration of the turbine without inducing excessive loads in the system.

3) Controlled braking due to overspeed. The Twiflex brakes are spring-applied, hydraulically released. If there is a power failure the brakes automatically engage. Brakes may be applied for maintenance; this is done through the Twiflex powerpack and customer’s control system. During normal operation the brakes are off. If the brakes are applied, the rotor will be brought to a stop and there will be no power generation.

Neptune and Twiflex collaborated during the braking system design process. “After an engineering review of the application,
Twiflex supplied a VKSD-FL with a slight modification. A powerpack, disc, and hub were also supplied to suit the customer requirements after initial discussions between Twiflex and Neptune,” said Harvey. “The hydraulic powerpack operates the spring-applied, hydraulically-released brakes. The MP powerpack is a standard product tailored to each application.”

The customer requested a brake size at 50kNm torque, and, according to Harvey, calculations based on inertia seem to support this. “We have actually supplied two off brakes each giving a torque of 150kNm when pads are fully bedded,” he said.

The “FL” is a long established variant of the standard VKSD brake, accommodating any axial disc float, and permitting installation where space is limited. They are machined to suit the customers’ disc thickness.

According to Tony George, energy market manager for Twiflex Limited, the gen-set and braking system are housed in the binnacle over the turbine shaft, and above the waterline. To avoid any saltwater/corrosion issues the brake system is housed in a sealed environment, protected from water ingress, so standard factory finish was sufficient protection, George added.

“Almost every brake supplied of this type is a special, based on the original design principle,” George said. “There are a huge number of options, from varying the braking force, monitoring switches, paint finish, environment protection, pad material, disc thickness, etc., to be decided when specifying the final product.”

Tidal turbines generate power as do wind turbines by the rotating of blades powered by dynamic environmental forces. The low- profile Proteus NP1000 is aesthetically unobtrusive, a significant advantage over wind power alternatives which are often viewed as intrusive to sea and landscapes.

Private industry and public agencies of the EU have led the way in the development of tidal turbine technology, with the United Kingdom leading the world in this emerging market. In recent years, the European Marine Energy Centre (EMEC) in Orkney, Scotland was constructed as the world’s first dedicated test center for commercial scale tidal (and wave) devices. It offers developers the opportunity to test full-scale, grid-connected prototype devices in unrivaled wave and tidal conditions.

“We selected the Humber Estuary for the first deployment of the Proteus for its depth and tidal flow. It’s considered one of the best locations in the British Isles for tidal stream power, while also being relatively close to our base in North Ferriby, East Yorkshire,” said Hardisty.

The massive steel-hulled Proteus – 150 tons, 20 meters long, 14 meters wide – is the first full-scale prototype to be deployed by Neptune. Once proven, it is expected that multiple units would be deployed in estuaries surrounding the UK which feature strong peak spring currents. Neptune Renewable Energy’s full-scale Proteus NP1000 tidal stream power generator has now generated its first electricity and is soon to become one of the first economically viable devices in the UK.

“Neptune Renewable Energy can, potentially, deliver a continuously available source of power which is not reliant on the prevailing weather conditions, Hardisty said. “The predictability of tidal streams certainly has to be viewed as a major advantage for planners at a local, national or governmental level, as it means that output can be reliably forecast many years into the future.”