When designers develop machine functions that include friction clutches/brakes, too many make the incorrect assumption that electric clutches/brakes provide the same performance capabilities as the pneumatic units.

For the majority of applications, this is simply not true. There are differences, and in some cases these differences are significant. Certainly there will be cases where an electrically actuated clutch/brake and a pneumatically actuated one will provide similar results, but in most applications, actuation methods matter. These differences can be broken down into several categories: unit performance, total system installation costs and system operating cost. 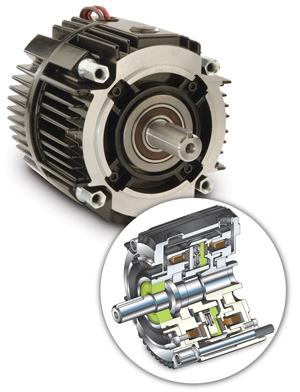 Generally speaking, electromagnetic engaging units reach a lower torque range than pneumatics. Standard catalog electromagnetic designs reach down to the 2-3 inch pound range. Where it is important to control engagement time, electromagnetic clutches including the Warner Electric Gen2 UniModule shown, will provide greater performance consistency over the life of the unit.

As a starting point, let’s review the basic engagement method for both the pneumatic and electromagnetic clutch. In pneumatic designs, an actuator is inflated to apply pressure on the friction faces. When air pressure is applied, the two friction faces are compressed together. This causes a clutch to drive or a brake to stop. Generally, these units are designed for full torque at 80 PSI of air pressure. In an electromagnetic design, the pressure that clamps the two friction faces together is electrically created magnetism.

For the average load in a common sorting conveying or indexing application, an electromagnetic and a pneumatic clutch/brake can perform quite similarly; at least for a while. The issue with sorting, indexing or positioning applications is consistency. The load needs to be accelerated and stopped accurately and consistently, and in order to achieve consistency cycle after cycle two things need to be true: the actuating method must be consistent and the unit needs to maintain a consistent air gap – that is it needs to adjust for wear.

In pneumatic designs, as the friction faces wear, the air actuator requires a greater volume of air to achieve the same clamping force for the friction surfaces. Therefore, the time from when the engagement switch closes to when the unit is fully engaged will increase as the unit wears. For one common manufacturer of pneumatic clutches/brakes, the volume of air in the actuator will rise by 200-300 percent as the unit wears.

In electromagnetic designs, an adjusting mechanism can be built into the design of the clutch/ brake. These mechanisms (such as the Warner Electric Autogap™ feature) automatically adjust for wear as it occurs. The adjusting mechanism maintains the same air gap between friction faces, and therefore the engagement time will remain consistent.

How an Autogap Feature Works:
For this illustration we will use a pin drive design.
(The basic function is similar for spline drive designs.) 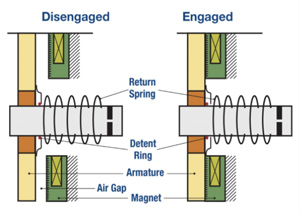 There are two key components that allow an autogap feature to work: the detent ring and the release spring.

The detent ring is an interference fit on the drive pin and is captured under a simple cover or cap. The release spring is loaded so it will push the armature away from the magnet.

When the unit is powered, magnetism forms in the magnet and pulls the armature in, causing them to clamp together. In the graphic, note that when the unit engages, the detent ring does not move with the armature; it holds its position on the drive pin as the armature slides on the pin.

When power is removed the release spring pushes the armature away from the magnet, but only as far as the detent ring allows. The real key to an effective autogap mechanism is that the degree of interference between the detent ring and the pin is less than the clamping force between armature and magnet.

For a wide number of applications, engagement time consistency over the life of a clutch/brake can be a key to protecting profitability. For example, a bag filling operation that is designed to meter out 12 ounces. of product into a bag can be affected by variations of engagement time. If engagement time remains constant from cycle to cycle, then the amount metered into the bag will remain constant. However, if the engagement time in the clutch/brake increases as wear occurs, the amount metered into the bag will increase as well. After a million cycles we may find 12.1 ounces, and the amount may increase by one tenth of an ounce with each million cycles. A two percent growth in product overage may be a significant factor in long term profitability.

The Department of Energy states:

“Compressed air is probably the most expensive for of energy in a plant. Compressed air energy can cost six times more than electrical energy when it comes to mechanical or process related work.”

A new given system, when used specifically as designed, will be less efficient than an electrical system for the same work, but an air system can be efficient within itself when compared to other air systems. However, the vast majority of systems in industrial facilities are modified to meet the changing needs of the factory. As a result, they lose their efficiency as complexity is added. 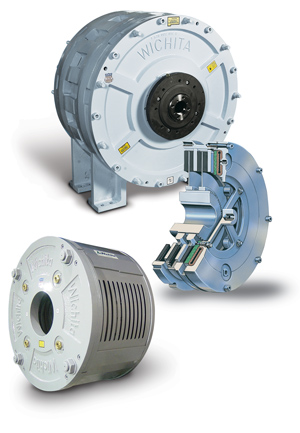 These systems are complex. They compress factory air, use filters to remove contaminants, dry the air to remove humidity and move the air through piping. However, air is heated as it is compressed; this requires cooling. Cooling the air causes humidity condensation, which requires drying, and thus the cycle is repeated.

All of these devices are electrically powered and connected with pipes and hoses. This complex interaction between stages creates opportunities for pressure changes as filters are filled and dryers collect humidity. As a result, hoses and pipes are under pressure, which can lead to leaks. Leaks in air systems are cited as the source of loss of at least 10 percent (more likely over 20 percent) in the typical factory.

The result of pressure changes and leaks creates maintenance costs within a factory. Filters must be cleaned routinely. Lubrication systems, dryers and separators must be maintained and leaks addressed.

Compared to an electrical system, moving around a factory is a difficult, multifaceted challenge. On the other hand, electricity does not need to be dried or cooled. Power is regulated through transformers, but there is no maintenance to this process. Once installed, the systems require little active maintenance.

By comparison, installation time for an electric system is generally more simple and cost effective than air. Running wire to an application is easier than installing piping for an air system. A switch controls both the electric and pneumatic units. In the electric unit, the switch directly controls the DC power going to the clutch/brake. In a pneumatic system, the switch actuates the valve, which controls that air flow to the clutch/brake. In addition to the switch being a potential problematic point of installation, the pneumatic system also requires proper installation of the valve.

The electrical power coming into most facilities in North America is relatively clean and consistent. Even when the machine is poorly installed, electrical power variation does not vary widely. Furthermore, electrical clutch/brakes are fairly simple devices and are not prone to performance problems due to spikes or noise in the electrical lines. While these kinds of power problems can impact variable speed drives or PLCs, clutch/brakes are much simpler and are not affected.

To run an electromagnetic clutch the system requires AC power input. From that point the components are:

The effect of system variations on clutch/brakes can be dramatic. Electrical power in a facility will generally not vary by more than a few percent on any given power grid.

If this does occur, the effect on clutch/brake performance is generally low. A change in input voltage from 90 volts to 81 volts does not have significant impact on unit performance.

When evaluating pneumatic units, we see that the variations can impact air pressure dramatically. As filters and dryers do their work they accumulate contaminants and humidity. This accumulation will impact air pressure. As noted earlier, variations of 10 percent or more are common in North American factories. Returning to our indexing or metering applications, we see that as variations take place, engagement time will change. As engagement time changes, product quality, scrap, or both will be impacted.

When considering clutch installations in mining and materials processing, there are a wide range of applications requiring a clutch to bring a load to speed, and to safely bring the load to a stop. These applications may range from 50 to several thousand HP.

It should be noted that in these applications, cycle rate is commonly much lower, ranging from a cycle every few minutes to possibly once each day or less. In such applications, positioning tends to be less important, and the accuracy that can be achieved with electromagnetic designs is less valuable as well.

Conversely, electromagnetic clutch/brakes can carry torque capacities down to a few in. lbs. and provide cost effective control of loads in those ranges. While small pneumatic designs can be made, they rarely reach below 100 in. lbs.

It is in the mid-range from 10 HP to 50 HP where both electromagnetic and pneumatic designs can perform that the selection challenge exists. Applications requiring consistent repeatability will benefit from the electromagnetic designs, as will those that need moderate to high cycle rates. For lower cycling applications that do not require significant accuracy, designers may find the strengths of pneumatic designs more economically beneficial.