A crane manufactured by Mostovik Crane has been developed to lift 12m long panels for the Russky Island bridge to a special delivery barge. Capable of transferring panels that each weigh over 300 tons, and of operating in extreme temperatures, the unique crane relies on gear motors supplied by Bauer. 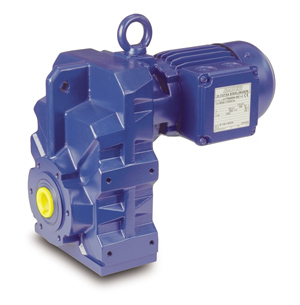 Bauer, with the support of Pribor-Servis, its partner company in Siberia, supplied BF Series geared motors for the Mostovik crane, providing torque for 10100-13400Nm.

Russky Island is located just off Vladivostok, with the Eastern Bosphorous strait separating the island from the Muravyov-Amursky Peninsula. In 2007, as part of a massive regeneration project, development work began to turn the island into a large scale, state-of-the-art tourist resort. Plans were drawn up for the construction of a bridge that would link the island to the mainland. That same year, it was announced that these new facilities would host the APEC summit. Much, then, depended in on the timely construction of the bridge.

With Vladivostok being the largest Pacific port in Russia, the bridge had to be high enough to allow passage for any class of vessel. In addition, the Eastern Bosphorous strait is 1460m wide in the bridge project area. The result is that the finished bridge will break numerous world records, rising more than 70m above the high water level, with a central span 1104m long. Pylons 320m high will hold stay cables 580m long.

Among many demanding phases of construction, one of the most challenging is the assembly of the central span, made up of 103 panels, each 12m long, 26m wide, and weighing a total of 23,000 tons. The panels are aerodynamically designed to give the bridge maximum stability in the high winds for which the region is renowned. The panels are delivered by barges which are carefully positioned under the installation using GLONASS, a Russian global satellite navigation system.

Lifting the enormous panels from the barges to an elevation of 70m and into position is a precision operation taking about one and a half hours to complete. A special crane needed to be developed for this unique application. That development was put in the hands of the Mostovik Crane Factory, which specializes in the manufacture of large capacity cranes for the most challenging applications. 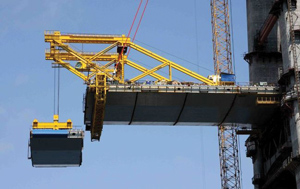 A custom-designed Mostovik derrick crane was installed on the bridge center span deck, cantilevered over the nose and facing toward the strait.

A custom-designed Mostovik derrick crane was installed on the bridge center span deck, cantilevered over the nose and facing toward the strait. The crane is equipped with a wind gage, a lifting height indicator, and an indicator that shows precise panel position during the lift.

The application requirements for this particular crane were especially demanding. Not only would it have to lift and safely position panels weighing over 300 tons each, but it would have to operate reliably in extreme temperatures. Winter temperatures in the region can drop as low as -30°C. To meet these requirements, Mostovik Crane Factory turned to Bauer Gear Motor, an Altra Industrial Motion company, for the supply of suitable geared motors. Bauer, with the support of Pribor-Servis, its partner company in Siberia, supplied BF Series geared motors, with torques from 10100-13400Nm.

Setting new standards for reliability, efficiency and economy, BF series geared motors can be mounted in any required position – horizontally, vertically or suspended – to meet any application requirement. Total flexibility in mounting options includes shaft, foot, face and flange solutions. The motor terminal box can be mounted in alternative positions rotated in 90 degree steps around the motor frame, providing for unparalleled integration possibilities. 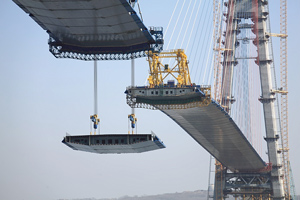 For absolute reliability, the BF series geared motors are completely enclosed and sealed to IP65 as standard (IP66 optional) against dust and water spray. Important for use in the Russky Island bridge application, the geared motors also provide comprehensive corrosion protection.

Low in operating noise, with output speeds from 0.2 to 190 RPM, the BF series geared motors provide an inverter-friendly design for easy integration. On the Mostovik crane developed for the Russky Island bridge project, the BF series motors are driven by Danfoss frequency converters. 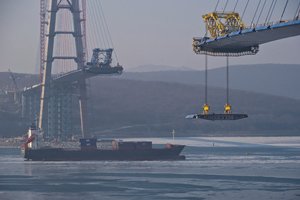 Bridge panels are delivered by barges, which are positioned under the installation using GLONASS, a Russian global satellite navigation system.

Bauer won the contract for the supply of the geared motors against stiff competition. With the Mostovik crane being pivotal to the success of the bridge construction project, absolute reliability was critical. Bauer’s reputation for quality in some of the world’s most demanding crane projects was one of the keys to the products’ selection by Mostovik Crane Factory.

The construction of the bridge is on schedule and continuing apace. By the middle of February, 2012, 900m of the channel span deck had been installed, with paired panels 41 and 42 being lifted to the 70m elevation from the strait water on the Russky Island side. As a result of this operation, the assembled cantilevered part of the steel stiffening girder on the Russky Island side now extends over 438 meters from the M7 Pylon centerline toward the mainland. 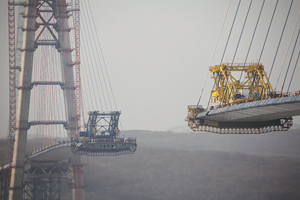 A total of 462 meters of the span deck have been installed on the Nazimov Peninsula side where paired panel numbers 43 and 44 have been lifted to the design elevation. The total length of the opposed cantilever sections of the main steel stiffening girder now runs 81.5 percent of the total length of the 1104m long channel span of the bridge over the Eastern Bosphorus Strait.

Just ten more lifts of paired and single deck sections will be needed on both sides of the strait, including panel number 52, to complete the world record span of the deck. The preassembly of the final section has already been completed on the Nazimov peninsula building ways.