Best Practices Series: Getting the Most Out of your Gearboxes

The right angle worm gear gearbox is a relatively simple device, but it often fails due to some common maintenance issues. The gearbox consists of two shafts mounted at right angles within a cast iron housing. The worm is mounted on one shaft and the gear on the other. The shafts are held in place and supported by bearings. The relationship of the shafts is established by the housing and the assembly process.

Like many mechanical devices used in industry, the gearbox is tolerant of some misuse, but will provide much longer and more efficient performance if users are aware of a few key potential problems. In this article, we will review several steps that users can take to ensure they get the most from their gearboxes. Areas to be covered include: proper lubrication amounts and schedules, seal care and motor installation.

Running Dry: The most common cause of gearbox failure 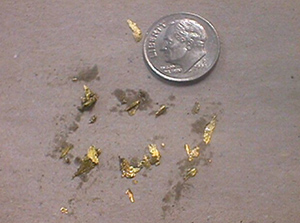 The wear chips shown are from a bronze worm gear, which are the result of running a gearbox without lubricant.

Most gearbox manufacturers ship their gearboxes dry. There are several reasons for this. Lubricant increases unit weight which would increase shipping costs. For larger gearboxes, this can be a significant amount. Additionally, many facilities have a standard lube supplier. By shipping units dry, the gearbox manufacturer avoids the introduction of an alternative lube source into the plant that may or may not be fully compatible with the existing supplier’s offering. As a general recommendation, different lube types should not be mixed.

Gearbox manufacturers include labels and tags on their gearboxes warning that the gearbox is dry and must be filled with lube prior to any usage. These warnings, however, are too often ignored, and the result is rapid unit failure. Running a unit dry will cause damage to the bronze worm gear very quickly (see photo). Even if lube is added after the fact, this damage is permanent and the gearbox will need to be replaced. Unfortunately, there is no way to “heal” a worm gear.

Another leading source of gearbox damage: Running with to little lubrication 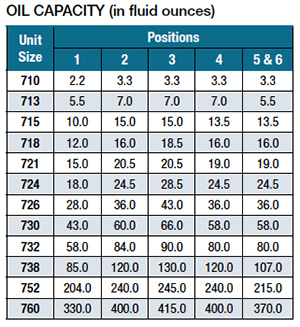 In many manufacturing facilities, it is not uncommon to see a single size and model of a gearbox used in multiple locations. If the gearbox is always mounted in the same orientation, all is well. But in many instances, there will be a few gearboxes mounted upside down or sideways. These mountings may result in a gearbox with too little lubrication.

Sitting on the shelf in maintenance inventory, there is no indication which orientation a gearbox will be mounted, so the possibility of having too little lube is not unusual. Unfortunately, gearbox failure due to under-lubrication is fairly common. Ensuring that the gearbox has the proper amount of lube is easy and will ensure longer unit life. Oil Capacity Charts (like that shown from Boston Gear) are commonly included in installation manuals, catalogs and online.

Using the right lubricants is critical for long gearbox life 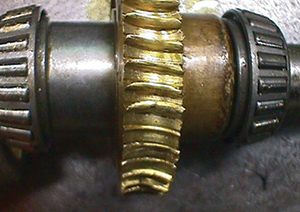 Chemicals found in many lubricants with EP (Extra Pressure) additives will soften the bronze worm gears and lead to rapid wear of the gear tooth structure.

Gearbox manufacturers have identified and recommend specific lubricants for their gearboxes. Whenever possible users should abide by these choices. After all, the selection is made to capture the greatest possible unit life for the customer. If this is
not possible, users should ensure that the characteristics of the lubrication are consistent with best unit life. For instance, with
a worm gearbox, lubricants that include sulphur or chlorine are detrimental to the bronze worm gear of a gearbox. Many lubricants with EP (Extra Pressure) additives will include these chemicals.

The importance of proper seal maintenance 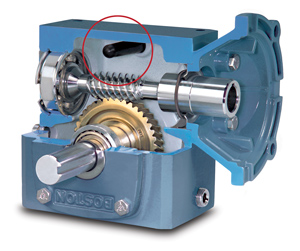 Pressure relief devices such as Boston Gear's unique PosiVent® system reduce seal strain and also eliminate the need for breather vents. This is especially important in wash down applications where breather vents can allow wash down solutions and water to get inside the gearboxes. There, they breakdown lubricant, cause premature wear, and ultimately lead to unpredictable failure.

Preventing lubricant from escaping will also extend gearbox life. Like all liquids, lubricant will seek the lowest space inside the gearbox housing. Worn seals will provide a path for leaks to occur as seals are a wear item. They provide a connection between the rotating shafts and the stationary housing.

The challenge with seal care is that it is very situational. A facility that generates a great deal of abrasive particulates, such as a paper mill, will see seals wear more aggressively than a warehouse might. Therefore, the same model gearbox will require more seal monitoring in one than another. Common seal life is 3000 hours, but this may vary widely from one installation to another even within the same facility due to the amount of abrasive particulates around the seals.

There are several ways that seal life can be improved. One is simply to keep them clean. As noted above, different plants (and different locations within plants) will have differing levels of contamination.

Another way to improve seal life is to reduce pressure on the seals. As gearboxes run, they generate heat which, in turn, creates thermal expansion within the gearbox. Use of pressure relief devices that manufacturers provide can reduce the strain on seals caused by thermal expansion.

Many gearboxes can also benefit from the use of double seals, especially a gearbox mounted with input low (Worm-Under). Some manufacturers recommend against mounting in the worm under configuration. Others find that doubling up on seals will ensure unit integrity. Checking with the manufacturer is recommended. 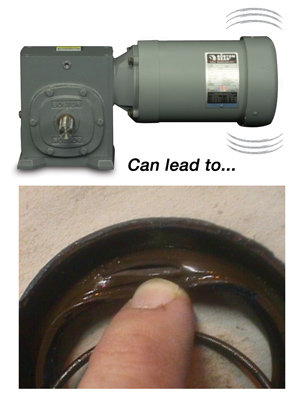 By far the most common mounting for worm gearboxes is with a C-face motor. The shaft of the motor should slide easily straight into the hollow bore of the gearbox. If the shaft does not slide in easily, care should be taken not to wiggle the motor from side to side. Doing so can compress and release the seal causing permanent seal deformation and create a site where leakage can occur.

One challenge for gearbox manufacturers is that seals may not fully engage shafts when first installed. That is, they need to run against each other to seat properly. This initial run-in period may be a few hours or days depending upon the RPM. There may be a slight seepage of lubricant during this time. Wipe away any such seepage and check back a day later to see that the seal has seated and, therefore, any seepage has stopped.

Attending to a few simple details can extend the life of mechanical systems. Use of the proper lubricant, the proper amount of lubrication and attention to detail during assembly can all lead to extended gearbox life that will translate into greater equipment uptime and lower operating costs.

Boston Gear recommends the Klubersynth UH460-1 for use in their worm gearboxes. A variety of gearbox sizes and configurations were tested in a lab at 20° C. Results showed that the Klubersynth UH460-1 achieved a life of 25,000 hours at full load (slightly less than three years of life, running continuously). Previously used synthetic oil had a significantly shorter life span.