In February of 2012, George Lankford, applications engineer at Warner Electric, received a phone call with an interesting request. The call revolved around the design project of five UW-Madison engineering students who were working to help a recently disabled orthopedic surgeon, Dr. Garrett Cuppels, overcome his disabilities so that he could work again. The students were looking for corporate partners who could provide them with the components they needed to build a sophisticated, one-of-a-kind device that would enable the gifted physician to reclaim his career, and with it, his quality of life. Critical to the success of the project were Warner’s ERS-42 spring-set, electrically released brakes. The students needed four of them.Lankford discussed the request for the donation of the brakes with Gary Haasch, product and engineering manager at Warner. They decided to donate the brakes and contribute to the success of the project. “We were really moved by 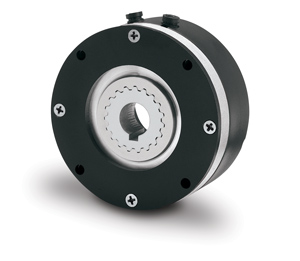 Dr. Cuppels’ situation and impressed with what the students were trying to accomplish,” Haasch said. “We felt that their eventual design solution had a very good chance of being commercialized to improve the lives of countless other paraplegic people.”It wasn’t the first time that Warner has participated in student engineering projects. Because of Warner Electric’s status as a global leader in the design and manufacture of electromagnetic clutches and brakes, it’s not unusual for a Warner product to be a coveted “just what we need” component of a student project. And Warner Electric is always willing to help with deserving projects when possible.

Dr. Cuppels is an orthopedic surgeon, with the skills, training and talent to repair his patients’ damaged bodies. But after an accidental fall from a 3-story balcony, Dr. Cuppels body was broken beyond repair. He suffered a spinal injury that rendered him a paraplegic person, unable to walk or stand. Incapable of physically performing the functions of an orthopedic surgeon, Dr. Cuppels lost his job. And the medical community lost a talented and experienced surgeon.

But Dr. Cuppels’ talent and experience were not damaged by his accident. His hands were still the sure and steady hands of a gifted surgeon. And the sum knowledge of his many years of training and surgical experience still existed. But without a physical outlet his knowledge and skills were rendered an untapped wealth. It was only for the lack of being able to stand and move on his own two feet that his gifts were lost to the world, and to the many patients he might have helped.

Dr. David Jones of the Berlin Memorial Hospital in Wisconsin became aware of Dr. Cuppels’ tragic accident. He contacted the Biomedical Engineering Department of the University of Wisconsin-Madison, and inquired about the possibility of designing a device that would enable Dr. Cuppels to perform standing surgeries. The metaphorical gauntlet was thrown, and five engineering students - Justin Cacciatore, Michael Konrath, James Madsen, Blake Marzella, and Bret Olson – decided to take up the challenge.

When the UW team learned of Dr. Cuppels plight, they wanted to help. The project fulfilled academic requirements of the UW Biomedical Engineering Design curriculum, which requires students to complete a series of design courses in their sophomore through senior years. But what began as just another school project quickly morphed into a mission. “We’re working for a real person,” team member Michael Konrath said. “This isn’t just a research tool, and it isn’t just to write a paper…what we’re making has to work.”

Engineering is about designing solutions that solve problems, and there were problems aplenty for the young engineers to solve. Devices that assist paraplegics with standing were in existence, but nothing that offered the automated, precision movement that would be necessary in an operating room. And after consulting with Dr. Jones and other staff at Berlin Memorial Hospital, the students realized that they’d have to design a device that allowed Dr.  Cuppels to move just as swiftly and precisely as an able-bodied surgeon. Anything less and the length of surgeries could be extended, requiring patients to be anesthetized for a longer period in comparison to an able-bodied surgeon performing the same procedure. That would result in increased risk to the patient – an unacceptable outcome.

Additionally, the device would have to be designed such that the width was no greater than 36 inches, and with a minimal portion of the structure of the device in front of Dr. Cuppels. The possibility of static electricity generated from the wheels was a concern, and portions of the device had to be constructed of non-conductive material because of the risk of electrical discharge from cauterizing wands. The components of the device would also need to be able to withstand frequent and liberal applications of Virex, a powerful disinfectant.

And to be truly practical, Dr. Cuppels would need to be able to mount the device and raise himself from a sitting to a standing position completely unassisted. The device would also need to be moveable manually in the event of a battery or motor failure.

After nine months of intensive research and design work by the UW team, SPOT was born. SPOT (Standing Paraplegic Omni-directional Transport) consists of a sit-to-stand frame mounted on a robotic base. SPOT’s user interface consists of a joystick, an enable button and an emergency stop button. When the enable button is deactivated, commanded movement of the device through the joystick is disabled. This safety feature prevents unintentional movements resulting from accidentally bumping the joystick during mounting or dismounting, or during a surgery.

The base is constructed of eight steel reinforcement rods, two aluminum C-channels, and an aluminum I-beam. The team determined that a minimum base weight of 269 pounds would ensure that SPOT would not tip. For optimal control, mecanum wheels were positioned to form a 27.5” square and mounted to the 36” square base. 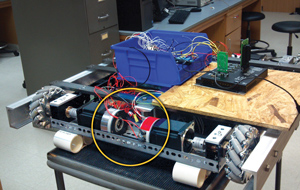 The mecanum wheels consist of fifteen 45 degree passive rollers mounted around the diameter of each wheel. Each wheel provides a movement vector at 45 degrees to the plane of the wheel. By mounting the wheels such that the rollers are at opposing angles, any desired net direction of motion may be generated by rotating the wheels in opposing directions and at varied speeds. SPOT’s mecanum wheels enable movement in any direction, and SPOT is also capable of a standing pivot both clockwise and counterclockwise.

Each wheel is powered by its own stepper motor, with each motor connected directly to the wheel’s axel. And each stepper motor is controlled independently through the 3-axis joystick. Power is supplied by two 12-volt batteries installed in series for a total of 24 volts of battery power.

SPOT’s Brakes are a Crucial Component

The brakes were crucial to the success of SPOT, since movement of the device must be absolutely precise and stable. And because the device is battery-powered, conservation of power was a primary consideration in selecting components for SPOT. Warner’s ERS-42 brakes are electrically-released, spring-set brakes widely used in personal mobility devices, and the UW team decided that they would be perfect for SPOT. Although Warner’s ERS Series brakes are easily modified to accommodate unique mounting configurations, the UW-team utilized an off-the-shelf model for SPOT.

And since the ERS Series brakes are spring-set and electrically released, they use a minimal amount of power. Michael Konrath of the UW team said, “Our reason for selecting Warner’s brakes was mainly because of their ability to provide great stability while conserving power. Since the brakes are engaged when they are not being powered, they’re ideal for power conservation because SPOT will be stationary most of the time during surgery.” Konrath also said “Stability is very important in orthopedic surgeries, which are often very physical. Able-bodied surgeons often require bracing from nurses and technicians for certain parts of surgeries, such as during repair of dislocated joints. Warner Electric’s ERS-42 brakes provide the stability required for these physical activities.”

Corporate sponsors like Warner Electric helped to make SPOT a possibility, both technologically and financially. According to Professor Amit Nimunkar, faculty advisor, “The sponsorship from corporations has made this project a reality.”

High-tech engineering solutions are all about improving the human condition, and the team realizes that the ramifications of their project go far beyond helping one man regain his career. As team member Bret Olsen said, “Dr. Cuppels is going to be able to help thousands of people in his career if we can get him back in the operating room.” And of course, once perfected, production models of the SPOT prototype would have the potential of returning thousands of paralysis victims to richer, more productive lives. Dr. Cuppels is eager and optimistic about the project. “I never expected the project to be something on this scale,” he said. “I can’t tell you how excited I am.”

Professor Nimunkar is a bit excited too, about the passion and skill his students have demonstrated as well. “It’s been a wonderful experience to see so much energy and enthusiasm from the guys being put into the design, fabrication, fundraising and other aspects of the project,” he said. “I’ve been impressed with their ability to work as a highly functional and efficient team in order to make a difference in the life of Dr. Garrett Cuppels.”

Though it won the 2012 UW Madison Biomedical Engineering Award Design Excellence Award, SPOT isn’t quite ready for the operating room just yet. Lots of work remains to be done. But though the school year has ended, the UW team plans to continue working on the project. “We have this opportunity to help one person,” team member Michael Konrath said, “and we want to see how far we can take it.” Though the prototype needs some tweaking before it carries Dr. Cuppels back into an operating room, everyone is optimistic that the day will come.

When that happens, one man’s professional life will have been saved – to the benefit of the many patients he’ll be able to help in his career. And the professional lives of five University of Wisconsin engineering students will be off to a very impressive and immensely satisfying start. 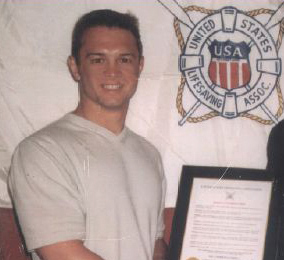 On a sunny day in May, 2000, a troubled man’s life hung in balance on a bridge more than 50 feet above the Schuylkill River in Philadelphia. Clinging to a steel beam on the outside of the bridge’s superstructure and threatening to jump, the man finally released his hold upon the bridge, and plummeted into the water below. He survived the fall, and still conscious, began to thrash about in the water, screaming for help. But his struggles gradually weakened, and his head slipped beneath the surface. He was drowning.

Onlookers were in shock as they witnessed the man’s imminent death. But one in the group took action. Garrett Cuppels, a medical student and former lifeguard, dove into the water and frantically swam more than 100 yards to reach the site of the fall, but the victim by then had sunk to the river bottom. Cuppels dove 10 feet to the bottom, and groping blindly in the murky water, finally found the victim and brought him to the surface.

Cuppels received national attention for his act of bravery, appearing on the Oprah Winfrey show and Dateline. He completed medical school and established his career as an orthopedic surgeon. But ten years later he suffered an accident that left him paralyzed from the waist down, and seemingly ended his career as a surgeon.

Hero is a word that is thrown about quite casually these days. But for a man to selflessly risk his life in the effort to save another – that’s true heroism. And for a team of students to spend hundreds of hours working to help one of those rare and special people – well, that might be considered just a bit heroic, too.