The right angle worm gearbox is a simple device that is used widely in manufacturing facilities. Like nearly all gears, enclosed worm gear drives require proper lubrication in the proper amounts. It is these two factors that are the most common cause of pre-mature failure in worm gearboxes. Lack of lubrication and use of incorrect lubrication are the two top causes of gearbox failure.

One of the common failures of worm gearboxes is that the unit has been run dry-without lubrication. It is common for manufacturers of gearboxes to ship units dry without lubrication. This is done for a couple of reasons. First, the added weight of lubricant adds to shipping costs and that weight can be significant in larger gearboxes. Secondly, many manufacturing facilities have standardized on a specific lubrication supplier and while many lubricants are interchangeable, they should not be mixed. Shipping a unit dry allows the end user to ensure commonality within their facility.

A novice installer may ignore or neglect to read the tags, labels and installation manual warnings that indicate that there is no lubrication within the gearbox and start up a drivetrain with a gearbox that is empty of lubrication. Running a unit dry will rapidly cause damage to the bronze worm gear. In the photo left (Figure 1) can be seen bronze shavings that resulted from a unit run dry. Even if lubrication is added after the fact, this damage is permanent and the gearbox will have to be replaced or rebuilt. There is no way to ‘heal’ a damaged gear.

A related failure is too little lubrication. The most common mounting for a worm gearbox is referred to as worm over. That means that the worm rests above the bronze gear. In worm over orientation a gearbox needs a set level of lube. This gearbox assembly can be mounted in the worm under orientation. (Figure 2). 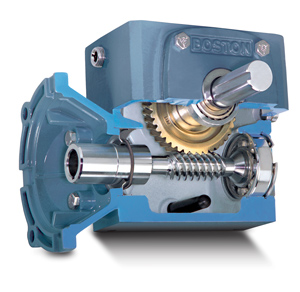 For any given gearbox, there is no physical reason a unit may not be mounted worm over or worm under, so long as proper lubrication levels are maintained. One of the problems that results from insufficient lubrication is that the failure is not immediate. The unit will perform well for a time, perhaps a few weeks or month depending upon the application. As a result, a technician may not make the connection between too little lube and unit failure and therefore may repeat the error.

Confirming how much lubrication is required for a given gearbox in a specific mounting orientation is relatively easy. Gearbox manufacturers include this information in their catalogs, manuals and on their websites. Further, all have application support staff available by phone and many have field sales staff that can provide guidance as well. 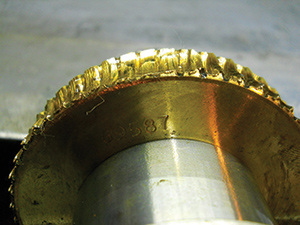 A second common cause of failure in gearboxes is use of inappropriate lubrication. Gearbox manufacturers have identified and tested specific lubricants for use in their products. Whenever possible it is best to follow these recommendations. The selections they have made are based upon the goal of providing the best possible unit life for the customer. Like lubrication amounts, this information is readily available in catalogs, manuals, on websites or via phone support.

Beyond having a ‘best’ lubricant for a given gearbox, there are specific lubricant characteristics that are known to damage gears. In the case of worm gearboxes, typically the worm is made of steel and the gear of bronze. Lubricants that include sulphur or chlorine additives will soften the bronze gear with the result being a reduction in unit life. Many lubricants that are classed as EP (Extra Pressure) will include these chemicals. While it may seem intuitive that an EP (Extra Pressure) lubricant will be appropriate for gearing, in this case, it is actually the opposite asEP additives will accelerate wear on the bronze gear by softening the gear teeth. Figure 3 shows a unit where the bronze gear teeth have been worn smooth after prolonged exposure to EP additive lubricant. The right angle worm gearbox is a common tool for reducing speed and/or magnifying torque in a wide array of applications. Ensuring that the gearbox is lubricated with the proper type and proper amount of lubrication are simple but important steps that maintenance staffs can take to help ensure the longest life from their installed gearboxes.