Reliability and durability of gearboxes depends on the following:

Gearboxes must be engineered and designed, or properly selected for the specified operating conditions which include the following:

Most gearbox manufacturers are experts in engineering, designing, and building gearboxes. They are not necessarily experts in all of the processes and industries that they support. In many cases, the process is confidential and proprietary, and must not be disclosed to anyone outside the company. Very simply, a gearbox is needed when a process requires normal speeds of equipment to be different than the electric motor, diesel engine, turbine, or other device that is driving the equipment.

The size of the gearbox is dictated by the amount of power and torque that needs to be transmitted. How much power is required?  Again we, the gearbox designer/manufacturer, require the expertise of the bridge engineer/designer, the steel mill OEM/user, the mass transit designer/operator, the ethanol producer, and engineers and designers of a multitude of other industries to define the operating conditions and performance requirements of the driven equipment. 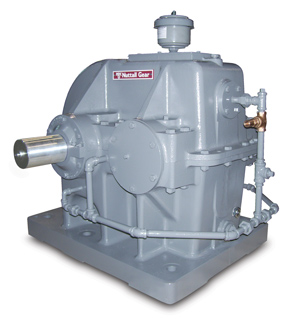 All gearboxes must receive periodic maintenance including an oil change. Oil should be checked regularly for contamination from dirt, debris, and other fluids such as water. The oil should also be changed periodically based on hours of operation and on oil temperature. Oil that operates at elevated temperatures (above 150° F), needs to be changed more often than oil that operates at 120° F. As the temperature increases up to 180° F the oil change frequency increases significantly. Between 180° and 200° F the recommended time between changes is reduced by 75%. Elevated temperatures accelerate the breakdown of the oil’s molecular structure thereby inhibiting its ability to form a protective film. If oil continuously operates above 200° F, a circulating lube oil system should be considered to cool the oil.

AGMA recommends that oil be changed after the first 500 hours or 4 weeks of operation, whichever comes first. After the initial operation of the unit, AGMA recommends that oil be changed every 2500 hours of operation or every 6 months, whichever comes first. AGMA further suggests that these intervals can be adjusted based on the system configuration as recommended by the manufacturer and furthermore that a condition monitoring program that identifies changes in the lubricant such as color, viscosity, oxidation, water concentration, contaminant concentration, percentage of sludge, and change in oil chemistry, primarily the additives, can be implemented to extend the change intervals. Basically, check out the system and make a change if it makes sense.

In addition to oil, the physical condition of the unit including the foundation, protective coating, seals, breathers, circulating oil system, couplings, and bearings should be inspected periodically.  A problem with any of these items identified in the early stage by plant personnel can help avoid a catastrophic premature failure of the gearbox. 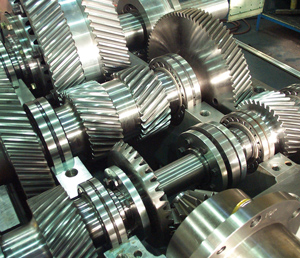 A worn bearing may cause uneven wear on gear teeth, but prolonged operation in this condition can lead to more severe conditions resulting in broken gear teeth which can feed to other gears in the train and cause damage to more components that might not have otherwise required replacement. An adverse condition may not be obvious to the operator but a periodic inspection of the gearing and any changes or acceleration in wear patterns indicate that something has changed and it should be investigated.

Condition monitoring programs evaluate changes in operating parameters and provide valuable quantitative data that can help forecast when failures might occur. These services can be performed by in-house personnel or contracted. Oil temperature, level, and condition, vibration, noise and physical condition of seals and breathers are some of the parameters that should be monitored. After an initial baseline evaluation of the system, periodic inspections, photographs, and data analysis are used to identify and evaluate any changes or trends that might signal a problem. 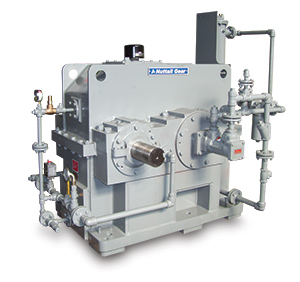 Proper lubrication is the single most important factor in ensuring the continued performance of a gearbox. Gears and bearings require properly specified and maintained lubrication.  The oil must be selected with the proper viscosity, pour point, and chemical make-up based on each application. All of the design factors listed above contribute to the selection. Many applications, such as moveable bridge drives, involve relatively slow speeds; 1800 RPM motors being slowed down to single digit speeds generally working with high torque requirements.

Relatively slow speed gears generally operate at pitch line velocities that are less than 2000 feet per minute. Oil operating at these speeds will not generally be subjected to overheating as a result of churning or internal heat build up from friction. Oil shear, the breakdown of the molecular structure of the oil, and air entrainment, both conditions that reduce the effectiveness of the oil, will normally not occur at the lower speeds. Therefore the performance of the oil will very predictable.

Lubrication effectiveness is a function of the oil film thickness and the ability of the oil to flow on the gear tooth surface. The viscosity of the oil varies with operating temperature and is the primary means of determining the effectiveness of the selected oil. If the viscosity is low, to the point that the oil does not have time to flow adequately to cover the tooth surface, insufficient lubrication will ultimately cause metal-to-metal contact between the mating gear teeth.

Oil film thickness is not only a function of the oil viscosity, but also the pressure on the gear teeth. Many factors including the gear tooth design, pressure angle, diametral pitch, crowning and others determine the forces where two gear teeth mesh. Oil is essentially a non-compressible fluid that will be squeezed out from between the teeth when the force is applied. The film can never be completely eliminated but it will become very thin under extreme operating conditions.

The oil film that remains is important because relative motion exists between the gear teeth, a combination of rolling and sliding. The pitch line of the gear teeth is the only point on the involute profile that the mating teeth experience relative rolling motion. The balance of the contact is a combination. Therefore, with two sliding metal surfaces mating, adequate lubrication film thickness is imperative for long gear life.

The surface finish, or roughness of the face of the gear tooth also contributes to the recommended oil film thickness.

A microscopic cross-sectional view of every surface reveals surface peaks and valleys defined by the surface finish. The roughness or surface finish of the face of the gear tooth can be measured in microns. As a general practice, the calculated oil film thickness should be approximately 2.5 to 3 times the surface asperities, the magnitude of the peak and valleys. This amount of oil film ensures that under the specified operating conditions, providing that the oil has been properly maintained, that the oil film will be adequate to prevent metal-to-metal contact between gear teeth. Should metal-to-metal contact occur, scuffing, scoring, pitting and premature wear will be observed. These conditions represent several failure modes of the gearbox related to lubrication.

Oil must also flow properly in order to achieve proper lubrication. As the gear teeth mesh, the viscosity must be such to allow the oil to flow into the mesh. If the oil is too thick, yes too thick!, the oil will not properly flow between the mating teeth. If the oil is too thin, the film thickness will not be adequate. Both conditions will result in metal-to-metal contact between gear teeth, initiation of premature failure of the gearing.

In gear units that require splash lubrication, the gear teeth pick up oil from the bottom of the gear case and deposit the oil on the mating teeth. The gearbox will experience lubrication issues if the oil selected is not viscous enough or if the gear speed, the pitch line velocity, is too high. In this case, centrifugal force will not allow enough oil to remain on the gear to produce an adequate film thickness. Again, the result will be pre-mature pitting and scuffing leading to failure.

In applications such as moveable bridges where gearboxes may be exposed to a variety of temperature and weather conditions, a synthetic grade of oil might be considered, as the viscosity will not change as much over a larger temperature range. The use of synthetic oil may not require that the oil be changed out with the changing weather. If more standard oils are selected, oil heaters, oil coolers, or perhaps replacement of oil during different seasons may be required. A factor for operators that must be addressed is that synthetic oils have significantly higher cost than the standard grades. The reduced frequency of replacement could justify the additional expense.