Bowie Industries, a major hydro-seeder manufacturer, was looking for an electric clutch solution that could better accommodate the higher torque requirements on their larger models. The new electric clutches would replace existing inconvenient, manually-operated clutches.

The hydro-mulcher drivetrain consists of two separate clutches mounted on a common shaft which is belt-driven by a 49 HP, 4-cylinder diesel engine. One clutch drives the tank mixer (with a 60-roller chain sprocket) which breaks up the bales of mulch material and mixes it with grass seed, fertilizer and water. The second clutch drives the ejection pump (with a smaller 60-chain sprocket) which feeds the mulch/water slurry to the hose spray nozzle.

Operators had to manually move two levers to engage and disengage either of the old-style clutches. In response to the problem, Warner Electric engineers developed a modified SF-825 clutch, which allowed the equipment operators to remotely engage/disengage either clutch as needed. The new remote push-button control feature provided a new level of convenience to the manufacturer’s customers.

Warner engineers worked closely with the customer’s engineer during application analysis, design and field testing. The Warner engineers designed unique input and output hubs to accommodate the two slightly different clutch application requirements. The clutch’s dynamic torque required 127 ft.lbs. at 1680 RPM, and needed to be able to dynamically cycle the ejection pump. The mixer clutch had to handle breaking up the mulch bales when dumped in the mixer. 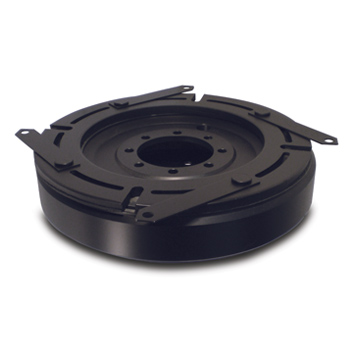