Warner Linear and Siemens Team Up to Eradicate Troublesome Dinosaurs

Orlando International Airport had a problem – fifteen of them to be exact. Fifteen of their baggage carousels were relics. Dinosaurs, you might say, that had outlived their time. These ancient units averaged 25 years on the job, well beyond their projected useful life.

OIA handles more checked bags than most other major airports due to ever-increasing aircraft traffic. The growing baggage volumes combined with changing baggage handling processes contributed to wear and tear on the older baggage carousels. Eventually the added wear led to outages and downtime. These interruptions in terminal operations were not much fun for airport management, airline personnel and passengers. 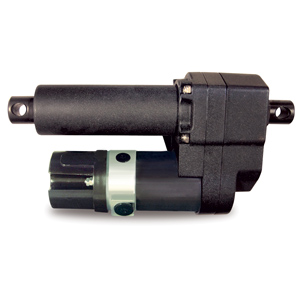 As maintenance and associated downtime began to increase, OIA management soon realized that the aging units could no longer meet the airport’s performance requirements. They determined that the time had come to replace the old baggage carousels with modern units. The task then fell to the Greater Orlando Aviation Authority (GOAA) to determine which manufacturer offered the best choice in reliable, efficient baggage carousels.

Around the time that OIA was experiencing these problems, Siemens was researching and developing a brand new carousel drive solution. Their goal was to raise state-of-the-art baggage carousel technology to a new level. According to Siemens engineer Chris Maness, “We’re always looking for opportunities to provide industry-leading solutions.” The Siemens team felt that they could develop a new baggage carousel that, using the latest in technology, could significantly outperform their competition. The goal for the new design was to be “low-cost, easy to maintain, easy to install, and very reliable, “And we also wanted the design to offer significant energy savings compared to competing units.” Thus, the Siemens 300C Flat Plate Carousel was born.

A New Standard in Baggage Carousels

The Siemens team achieved all of their design goals with the 300C Flat Plate Carousel. Perhaps the most innovative feature of the 300C is its distributed drive system. As Maness explained, “The traditional flat plate carousel uses a number of drive motors that are engaged at all times. Whether the carousel is running with a full load of baggage or with just one bag, it’s running at maximum power.” 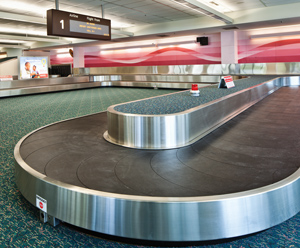 But Siemens engineers recognized the waste inherent in such a design. They wanted to design a carousel that would conserve energy, using only as much power as needed to handle the load on the carousel at any given time. They did this by replacing the old “always-on” drive motors of traditional designs with a series of smaller, retractable drive motors.

“After starting, the carousel speed and motor loads are monitored by a system controller which determines the minimum number of drives needed to operate the carousel most efficiently,” explained Maness. “Unneeded drives are disengaged and turned off, saving energy and wear. If the load increases, the system controller senses the need for more power, and the required number of drives are re-engaged.” As a result, the 300C is projected to slash energy costs by roughly one third in comparison with traditional carousels.

The system controller also tracks the run time of each drive motor. Whenever an additional motor must be engaged to handle an increased load on the carousel, the controller selects the motor with the least run time. That feature balances the wear among the drive motors, maximizing the useful service life of each and minimizing maintenance downtime.

Warner Linear Actuators Are the Heart of the System

For Siemens’ distributed drive concept to become a reality, Siemens engineers needed to find a way to smoothly and reliably engage and disengage each individual drive motor. They turned to Warner Linear, an industry leader in the design and manufacture of electric actuators, for an engineered actuator solution. 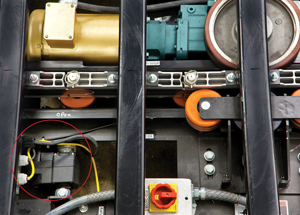 The Warner Linear actuator-driven retractable drives are the heart of the system that makes the Siemens 300C Flat Plate Carousel such as innovative new concept in airport baggage carousels.

“We received an inquiry from Siemens,” said Warner Linear engineer Jim Licari. “Siemens engineers had developed a unique, energy-saving drive control system for airport baggage carousels. The system operates similar to a 12-cylinder vehicle engine where all cylinders are engaged on start-up, and then some cylinders disengage as torque demands diminish at higher speeds.”

“We furnished a variant of our B-Track K2 electric actuator that, when activated, pivots the motor drive carriage into position under the carousel center chain, allowing the friction wheels to engage and drive the chain,” Licari said. When the controller shuts down a motor, the actuator disengages the friction wheels of the motor away from the center chain, so that the de-energized motor doesn’t become a source of drag.

The Warner Linear actuator-driven retractable drives are the heart of the system that makes the Siemens 300C Flat Plate Carousel such an innovative new concept in airport baggage carousels.

The Added Benefits of Reduced Energy and Noise

The Siemens team finished development of their new carousel in time to submit a technical proposal to the GOAA. The GOAA selection committee evaluated each contractor’s proposal, considering many factors including price and technical specifications. 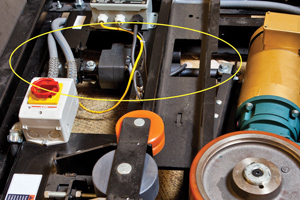 When activated, the Warner Linear actuator pivots the motor drive carriage into position under the carousel center chain, allowing the friction wheels to engage and drive the chain. When the controller shuts down a motor, the actuator disengages the friction wheels of the motor away from the center chain, so that the de-energized motor doesn't become a source of drag

The energy consumption of baggage carousels at OIA isn’t metered separately from other terminal operations, but after several months of operation, Patterson stated, “Based on what we have seen so far, we expect to achieve Siemens’ projected energy savings of approximately 20 to 40 percent depending on use.”

Another benefit of the Siemens carousels is the reduced noise levels compared to the old units. One OIA representative dubbed the Siemens carousels “whisper units.” “The new units are significantly quieter than the units they replaced,” said Patterson, “The older units used a sprocket-driven steel chain drive while the Siemens units use friction wheels to drive the carousel chain.”

With the help of Siemens and Warner Linear, Orlando International laid their dinosaurs to rest. Many airports worldwide, though, are still plagued by old, unreliable baggage carousels. Fortunately the 300C is now a standard product, and is available for installation in any airport.