When Wichita Clutch of Wichita Falls in Texas, USA, decided to upgrade their test stand, Richard Mayberry, Chief  Engineering Manager of Wichita Clutch assembled a team consisting of Chad Polley, Senior Lab Technician, and Kyle Wyatt, Senior Manufacturing Engineer and Head of Quality to work on the project. One of the most common motor sizes for driving many of the applications utilizing a Wichita Clutch is 1,500 HP (1,118 kW). Mayberry knew that he wanted a variable frequency drive (VFD) to operate their new 1,500 HP test stand  and turned to Vacon for a solution.

“Not only would the new VFD and 1,500 HP test stand allow for static and dynamic load testing of clutches and brakes, but it would set Wichita Clutch apart from the competition,” said Mayberry. No other clutch/brake manufacturer has a test stand this large for verifying clutch/brake performance data, burnishing brakes for customers, and for accelerating research and the development of new products.

Some customers provide Wichita Clutch with the load profile they want the clutch/brake to be able to handle. By programming the VFD test stand, Wichita Clutch can physically simulate the customer’s exact application and prove the performance and reliability of the product.

Wichita Clutch realized that with just one 1,500 HP test stand they had five man years worth of R&D and testing that they needed to perform. They decided to install a second 1,500 HP test stand. This second test stand will not only allow for testing of 1,500 HP clutches/brakes, but by coordinating it in a “masterfollower” mode with the existing 1,500 HP VFD, the two stands can be used to test 3,000 HP (2,237 kW) clutches/brakes. The new 1,500/3,000 HP integrated test stand system is in process.

Wichita Clutch was recently able to use their test stand to burnish the brakes for a customer who was installing them in an offshore application. The customer received the brakes, installed them, and was up and running much faster than previously would have been possible. The customer saved at least half a day as offshore platform day rates can be as high as USD 500,000/day. 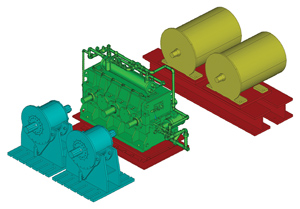 *VACON®
Non-regenerative front-end (NFE) unit is a rectifier that uses diodes/thyristors to feed power to the DC bus of a drive system. It uses an external choke and can control the charging of the DC bus, eliminating the need for a separate charging circuit. NFE units can be used when the flow of power is only towards the motor (motoring applications) and a normal level of harmonics in the supply is acceptable. They can be connected in parallel to increase the available power without requiring communication between the units.