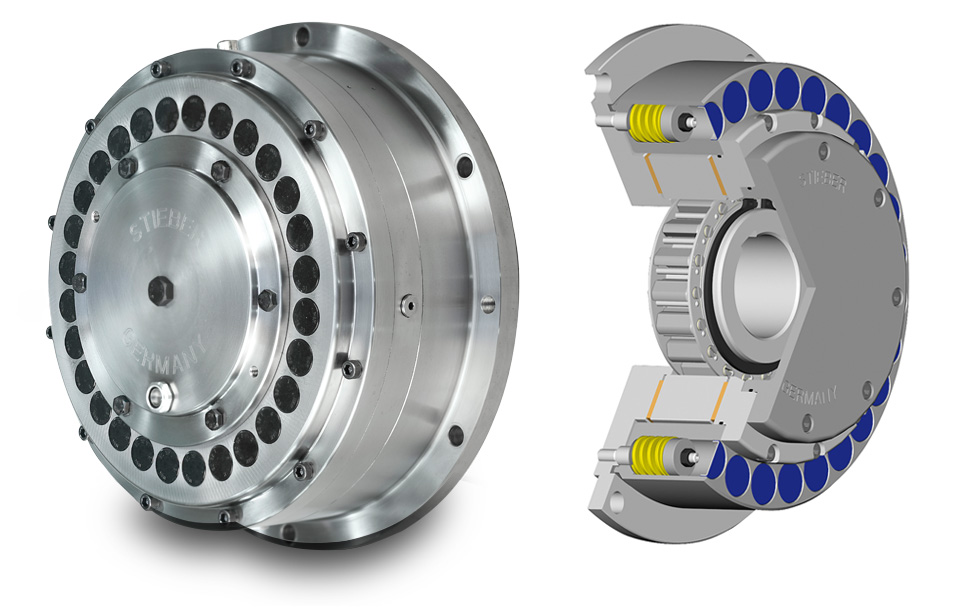 Stieber Clutch will be launching its new RDBK load sharing, high speed, releasable backstop at this year’s Hannover Messe. The product features a compact design with increased torque capacity compared to conventional designs, which helps avoid the over specification of gearboxes to meet large outside diameter requirements of some backstops. In the event of a blockage, belt jam or overload, the RDBK allows for a controlled release under load and is able to rotate backwards for maintenance and clearing work, unlike many other designs that offer limited reverse rotation after being engaged.

In most large conveying applications backstops are installed onto the gearbox to prevent the conveyor from rolling backwards in the event of a breakdown. To satisfy customer demands many backstops now include load sharing / torque limiting and releasable functions which help to reduce downtime once the backstop has been engaged.

However, to cope with the high torque loads, their design footprints are often quite large which means oversized standard gearboxes must be specified for them to fit. This can negatively affect the cost and overall efficiency of the gearbox. Traditional backstops can also make repairing the fault extremely awkward. While they prevent any immediate damage being done by uncontrolled reverse rotation, they also prevent the conveyor from being easily unloaded prior to maintenance. Even designs which allow for controlled release only provide a small amount of reverse rotation.

Built on many decades of experience of manufacturing backstops for demanding conveying applications, Stieber Clutch has developed a new compact backstop design which allows the correct sizing of gearboxes as well as offering reverse rotational capability with a simple hand operated hydraulic or mechanical release. The RDBK is a centrifugal lift-off sprag type backstop with an internal limiter which is designed for use on the high speed or intermediate shaft of the driving unit in multi-drive systems, such as on large inclined conveyors, where two or more backstops share the reverse load.

With a maximum torque capacity of 170,000Nm the unique, compact design gives it up to 3.5 times more torque capacity than conventional designs of similar sizes; with up to 15 times more energy dissipation. To make sure that it remains functional after long periods of inaction the friction linings are working in an oil bath, providing a consistent coefficient of friction even after long periods without engagement.

The release function allows the tension of a jammed belt to be released through an internal hydraulic system. The release is performed using a simple hand pump to actuate the internal hydraulic cylinder; progressively releasing the backstop (a mechanical alternative is available). When the oil pressure is released, the backstop is automatically re-set to the original slipping torque. The operation can be controlled and halted at any time, helping to boost productivity. Where multiple backstops are employed, these can be linked and operated simultaneously from a centralised control location.

Unlike other releasable backstops which feature only limited reverse rotational abilities, the RDBK is capable of performing as many reverse rotations as may be required to completely unload the conveyor prior to maintenance work being carried out; within the limits of energy dissipation. This feature can significantly reduce downtime and ensure that loss of productivity is kept to a minimum.

The new RDBK will be launched at this year’s Hannover Messe, 8th – 12th April, on the Altra Industrial Motion stand – Hall 25 Stand C03. A fully functioning demonstration model will be on hand for visitors to see the working benefits of the new model in the metal.