The torque arm is a simple device utilized on an array of industrial clutches and holdbacks with torques ranging from a few inch pounds to a million foot pounds. While very basic in design, when mounted incorrectly, all torque arms will yield the same negative result: costly unit failure and associated downtime.

Large holdbacks are used to help increase the safety of high capacity inclined bulk conveyors or bucket conveyors in mining applications. In the event of a drivetrain failure, holdbacks are utilized to help prevent loaded conveyors from moving backwards. Without holdbacks, such conveyors, with tons of ore or coal, may accelerate backward causing damage and downtime. A major complicating factor for these holdback installations is simply that they are typically outdoors, in high contamination environments often with extreme temperatures.

As world economies expand, the demand for basic materials such as iron ore, coal or bauxite grow with them. To address this, some mining operations have chosen to expand conveyor sizes, resulting in larger drive trains which require even more massive holdback sizes. The largest holdback sizes have grown by over 50% to more than 1.2 million foot pounds of holding torque capacity.

When power is cutoff or when the load exceeds the drives capability in a way that causes the load to start to back drive, the backstopping action of the clutch is activated. The clutch rotates slightly against the force which allows the torque arm assembly to receive a portion of the system load. One end of the torque arm is pivotally connected to the head member of the clutch, while the other end of the arm is connected to a stationary structure.

A torque arm mount for these larger backstops must be able to restrain the unit from significant rotation in the event of a reversal of force on the conveyor shaft. These torque arm reaction forces can range from a few thousand pounds to more than 100,000 pounds for larger size models.

Holdback manufacturers provide integrated torque arms that can withstand these forces, but the system assembler/installer must ensure that the mounting will withstand the forces as well. The preferred torque arm mounting position is horizontal which reduces bearing load yielding longer bearing life.

When mounting, the end of the torque arm must not be rigidly attached to steel framework. Instead, a bracket or stirrup positioned at the end of the torque arm must provide clearance to permit the backstop to center itself in axial and angular positions to prevent pinching of bearings causing damage or failure of the unit. This top of arm clearance can be either 1/2″ or 1″ depending arm type. 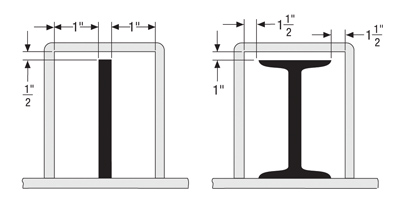 The required clearance also reduces any build up of debris that could create a binding situation. An effective preventive maintenance protocol would ensure that such accumulations would be cleared as a matter of routine maintenance.

Lastly, the needed clearance of the bracket or stirrup structure used for holding the torque arm will also allow for any thermal expansion/contraction due to swings in temperature.