A large hospital complex can often resemble a small town in its size and complexity; many separate wards are joined by a narrow corridor system where the smooth transfer of supplies is often interrupted by busy doctors and nursing staff. One of Europe’s largest hospitals has solved the problem with an automated underground mono-rail that supplies medicine, food and linen with minimal effort and at low cost. Bauer geared motors drive the vehicles and operate the track points.

The hospital in question, located in South Eastern Germany, now employs over 8,000 staff who work in 110 wards, providing healthcare to almost 55,000 in-patients each year. With each ward needing regular supplies it is vital that the hospital’s logistics model is as modern as its medical equipment. It is for this purpose that there is a complex network of underground tunnels under the University, one that has been developing since the 1920’s.

The tunnel network was first built to allow service staff to push supply carts between wards without holding up the medical activity taking place above them; the network has continued to grow over the years and now stretched to 6.7km in total. As the hospital has grown in size so too has the delivery system grown in sophistication and in 1969 a monorail system was implemented to speed up the delivery process.

The hospital regularly invests in new technology for the tunnel network, aware that it keeps the hospital operating. This investment has led to the automation of the monorail by one of Germany’s leading transport technology experts. The automated rail system is now able to deliver meals, medicine and linen from 9 dispatch stations to 101 destination stations around the hospital, making 16,000 trips per week. Labour costs are kept to an absolute minimum as the entire network is operated and maintained by a team of 8 people.

With such a small team manning a system whose smooth operation can quite literally mean life or death, it is important that all the components on the vehicles and rail system offer superb reliability and long life. Geared motors from Bauer, part of Altra Industrial Motion, have been specified to drive the vehicles and operate the points as they offer some of the best reliability in the industry.

A member of the team tasked with updating the tunnel system says: “When a problem occurs with the monorail a supervisor has to cycle to the point of the problem to repair it; we try to make sure that these problems are as infrequent as possible. There are 140 vehicles in operation on a track with many points along the way. Some of the first Bauer drive units to be used are now nearly 40 years old and still running smoothly, it is very rare that they provide the team with a source of exercise, so it made sense to us to continue to specify Bauer units as the newer parts of the system were being developed.” 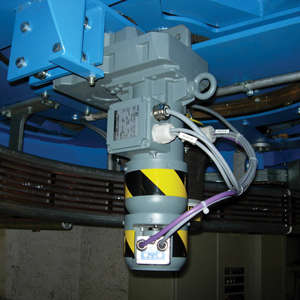 To operate safely and efficiently the vehicles need to accelerate smoothly to a pre-determined velocity, even when loaded with heavy supplies. Bauer’s BG series of helical geared motors were used as they offer torque values of up to 18,500 Nm with high output speeds. The motors can be easily integrated with an inverter to ensure that the acceleration curve is constant in every journey. The gears are designed with ingress protection of up to IP66 and lubricant changes are only required after 15,000 operating hours, which is ideal for an application located underground.

At various stages throughout the rail network the points are driven by Bauer BF shaft mounted geared motors, BK bevel geared motors and BS worm geared motors for lower speed applications requiring higher torque values. The choice and flexibility of the Bauer range proving that there is an ideal model for most applications, another advantage of the company having been established for over 75 years.