A major steel processor in Detroit was experiencing repetitive recoiler gear failures on their slitting line. The failures were occurring at a rate of every three to four months and plagued the plant with expensive repairs and extended downtimes.

Nuttall Gear was commissioned by the facility to complete a torque study, so management could gain insight and decide on a plan to upgrade the gear unit. The study determined that the unit was indeed underrated and massive overloading was responsible for the gear failures.

Based on the study, Nuttall proposed an upgrade for the existing unit, with a substantial increase in the service factor that would exceed the load currently placed on the recoiler. A substantial savings resulted because the original housing could be reused, eliminating the need to change the recoiler footprint, mounting arrangement and motor base.

Nuttall delivered the custom-designed gear train and assisted the customer in installing the gear set. The installation was accomplished over a two-day, off-peak period for the plant, further limiting downtime and lost production. Since the installation, the customer has not had another gear failure, thus eliminating slitting line downtime.

Nuttall Gear has made significant investments in the most advanced gear grinding equipment available today, and is proud to utilize this technology for the benefit of our customers. 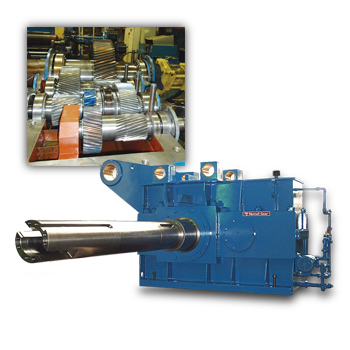