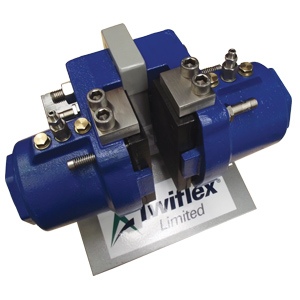 The VBS will be introduced as the smallest brake in the Twiflex module range - a range which continues to grow - with a braking force of 1.4 to 11kN. The brake is designed to deliver 2 million cycles at 2 mm air gap. It features a stainless steel piston, cover plate and fittings and optional ISO 12944-5:2007 C5 paint specification.

This new modular disc brake complements the existing range of conveyor brakes. The VBS is a ‘fail safe’, spring applied - hydraulically retracted disc brake caliper which consists of two modules mounted on either side of a central mounting plate. Intended for use on high speed drives on downhill conveyors the brake uses large pads (10,283 mm2 ) for high thermal capacity and is fully sealed against moisture and dirt ingress. Steve Powell, Product Manager for Twiflex, comments: “The brake is installed between the motor and gearbox to protect the motor against overspeed conditions when there is a mechanical failure in the drive. The VBS is easy to install and is fully interchangeable with most brakes on the market which makes swap-over extremely quick. The added benefit to the VBS over other brakes on the market is the ‘Parked Off’ feature which makes maintenance work far safer than anything else on the market.

“For many years much has been made of safety features in industrial disc brakes, with manufacturers claiming to provide ‘safety lock out’ during adjustment and pad replacement. With the exception of the Twiflex ‘Parked Off’ feature, all of these designs use a mechanical lockout system which utilizes a nut and center bolt arrangement. This method relies on the integrity of the nut and bolt to hold the spring force; if this fails then the brake will close, potentially causing extremely serious injury.

“In ‘Parked Off’ the disc spring load and hydraulic pressure in the Twiflex design are zero, meaning the VBS has no stored energy and therefore completely safe for maintenance / pad removal. The position can quickly be achieved in the field with basic tools making the brake 100% safe without reliance on mechanical lock out. This feature also allows the brake to be installed without the need for hydraulic pressure.” Powell continues: “We always try to consider the real world problems faced by engineers in the field when designing our latest products. I believe that the ‘Parked Off’ feature represents a real and unique step forward in personnel safety.”

Stieber Clutch launched its new RDBK load sharing, high-speed, releasable backstop at this year’s Hannover Messe. This compact product has increased torque capacity compared to conventional designs, which helps avoid the over specification of gearboxes to meet large outside diameter requirements of some backstops. In the event of a blockage, belt jam or overload, the RDBK allows for a controlled release under load and is able to rotate backwards for maintenance and clearing work, unlike many other designs that offer limited reverse rotation after being engaged.

In most large conveying applications, backstops are installed onto the gearbox to prevent the conveyor from rolling backwards in the event of a breakdown. To satisfy customer demands, many backstops now include load sharing/torque limiting and releasable functions which help to reduce downtime once the backstop has been engaged.

However, to cope with the high torque loads, their design footprints are often quite large which means oversized standard gearboxes must be specified for them to fit. This can negatively affect the cost and overall efficiency of the gearbox. Traditional backstops can also make repairing the fault extremely awkward. While they prevent any immediate damage being done by uncontrolled reverse rotation, they also prevent the conveyor from being easily unloaded prior to maintenance. Even designs which allow for controlled release only provide a small amount of reverse rotation. 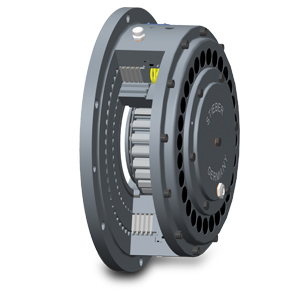 Unlike other releasable backstops which feature only limited reverse rotation abilities, Stieber Clutch's RDBK is capable of performing a many reverse rotations as may be required to completely unload the conveyor prior to maintenance work being carried out; within the limits of energy dissipation. This feature can significantly reduce downtime and ensure that loss of productivity is kept to a minimum.

Built on many decades of experience of manufacturing backstops for demanding conveying applications, Stieber Clutch has developed a new, compact backstop design which allows the correct sizing of gearboxes as well as offering reverse rotational capability with a simple hand-operated hydraulic or mechanical release. The RDBK is a centrifugal lift-off, sprag-type backstop with an internal limiter which is designed for use on the high speed or intermediate shaft of the driving unit in multi-drive systems, such as on large inclined conveyors, where two or more backstops share the reverse load.

With a maximum torque capacity of 170,000 Nm the unique, compact design gives it up to 3.5 times more torque capacity than conventional designs of similar sizes; with up to 15 times more energy dissipation. To make sure that it remains functional after long periods of inaction, the friction linings work in an oil bath, providing a consistent coefficient of friction even after long periods without engagement.

The release function allows the tension of a jammed belt to be released through an internal hydraulic system. The release is performed using a simple hand pump to actuate the internal hydraulic cylinder; progressively releasing the backstop (a mechanical alternative is available). When the oil pressure is released, the backstop is automatically re-set to the original slipping torque. The operation can be controlled and halted at any time, helping to boost productivity. Where multiple backstops are employed, these can be linked and operated simultaneously from a centralized control location.