Drives and motors are used to power an array of equipment in mining operations, from conveyors, and crushing/grinding equipment to flotation cells and pumps. The major challenges associated with powering mining equipment is the increased scale of operations and the accompanying requirement for increased power, whilst maintaining reliability. There are a range of companies that provide drives and motors for the mining industry, some of which are mining specific whilst others cover a range of industries.

Bauer Gear Motors has launched a new Ex-approved, IE4 Super Premium Efficiency motor. The new S Series is the latest development to Bauer’s permanent magnet synchronous motor (PMSM) motor range. The IE4 has the highest achievable energy efficiency rating within the motor technology, making the S Series the most efficient motor that can be used in an explosion hazardous area. Motors for use in explosion hazardous areas are exempt from the EU regulations on minimum energy efficiency because explosion protection takes precedence over energy savings. This has traditionally meant that overall energy efficiency has waned, however, the S Series of Bauer’s PMSM motor range, available from 0.55 kW to 15 kW are classified for Zones 1 and 21.

The S Series also has the advantage of maintaining constant speed independent of the load. PMSM synchronous motors offer considerably improved efficiency when compared to induction motors even under partial load conditions; and extremely high efficiency under rated operating conditions. They also have considerably higher power density, which, for geared motors, yields higher system efficiency with minimal installation volume – and also reduced weight. Importantly, PMSM drives can produce higher torque values for the same installation volume as conventional induction motors, a factor that allows cost savings, through the ability to specify a smaller motor size in some applications.

Protecting machinery and systems against expensive failures and costly downtime is indispensable to large scale mining operations; so many technologies are available to protect machinery against overloads. Andrew Bargh of Bibby Turboflex, part of Altra Industrial Motion’s couplings division indicated that “ large machinery and rotating systems can generate enough rotating energy to cause significant machine damage during a jam, crash stop, or during uncontrolled braking due to, for example, a power failure. At very low speeds, systems can develop a huge amount of unnecessary torque, which can damage drive system components such as shafts, gearboxes, chain and couplings.” Some of the technologies available to protect machinery include:

The final two points cover electrical torque limiting solutions, which are increasingly popular in many industries as they offer increased accuracy and reduced downtime following the overload. A sensor is used to detect a problem, and initiate corrective actions such as stopping and reversing the drive, engaging the brake or shutting down the machine. Bargh states that “the protective functions integrated into today’s sensing and control units are an expedient supplement to the mechanical torque limiting clutch, but not a replacement. Thus, mechanical torque limiters still make sense, but not necessarily for every application.” There is also the issue concerning the speed of the collision. For ‘hard’ collisions, when the speed or mass of the rotating components is at a high level, electronic controls may not be able to react before significant damage occurs. At these speeds, only a mechanical overload device can react quickly enough to prevent damage. The complexity of each system should also be considered, especially in applications which are remote or have limited access. Electronic monitoring systems need multiple sensors for data; between the monitoring system and all of its sensors and other components the system has multiple possible points of failure. Once installed, a mechanical limiter can be left in-situ with minimal maintenance, and yet offer complete reliability in the case of overload. 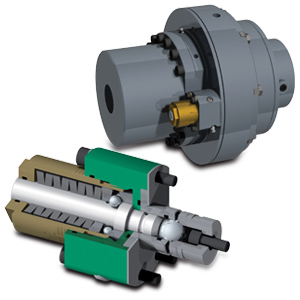 The optimised design of the UEP torque limiters also means that installation is highly flexible, enabling the centre section of the torque limiter to be removed without the need to move the motor or gearbox. Similar design versatility ensures that any maintenance of the modules is a straightforward operation, and that recalibration is a simple removal operation achieved without having to replace the complete torque limiter unit.

When considering how best to protect machinery from overload it is important to consider the different scenarios where this might occur. Electrical monitoring or sensing equipment can initiate corrective actions prior to overload during a slow torque increase, however, there are times when the increase is too fast and the electrical system may be too slow to prevent damage to other components.