Evaluating the trade-offs between solutions can be an important part of product selection. Product features that appear minor may significantly impact unit performance, life and cost. Further, product features may also impact the performance of related drive train components in either positive or negative ways. When evaluating application solutions it is best to consider the whole picture to determine which solution will meet the majority of needs in the application.

The art of plant operation is an exercise in trade-offs. The balancing act of capturing best performance at best cost. The trade-off of unit price versus unit quality and robustness is one that has been discussed ad nauseam. We all know, even if we do not always act on it, that it is rare to get high-end performance for a low-end price. But there is more to it than that; between equivalently priced solutions there can be less than obvious differences that may impact product life and performance in dramatic ways.

To illustrate this point we will use that most common of products: the industrial V-belt drive. Walk into any manufacturing plant and you’ll be hard pressed to walk far without seeing one, or at least the guard covering one. 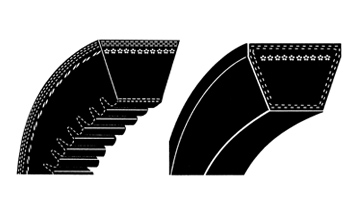 V-belts are still available in the A, B and C “classic” belt sizes that were developed in 1920s. The D and E sizes have largely passed into history but A, B and C remain common. There are also the Ultra V 3, 5, and 8 sizes developed in the 1950s; a slightly different form than the A,B and C belts but V-belts nonetheless. The Ultra V units took advantage of newer materials and manufacturing developments to create a belt that could carry more load in the same space or the same load in less space. More recent belt material developments allow high end versions of standard V-belts and Ultra V-belts to carry even higher loads.

When selecting a belt drive for a new application, it is worth the time to do sizing of multiple types of belts. Consult with your belt drive supplier to make sure you are taking into account all of the variables in your application.

Consider for instance the differences between standard wrap molded belts in comparison to the raw edge cog designs. The cog belts, with their notched or cogged design, are able to make the curve around the arc of the sheave in a smaller diameter than the wrap molded. This might mean the drive can be a smaller diameter pair of sheaves. Smaller diameter will mean lower cost given that there is less metal in the sheave. When considering smaller diameter sheaves it is important to ensure that minimum sheave diameters fall within the standards recommended by NEMA to minimize motor shaft loads

The raw edge of the cogged designs typically have a greater coefficient of friction compared to the wrap molded. That can translate to more power transmitted for a given application compared to the wrap molded. There may be applications in your facility where the wrap molded belt life is less than it once was due to an increase in load; and in such a situation, changing to a cog belt may result in an improved belt drive. Cog belts can provide up to 30% more HP capacity than wrap molded. One obvious trade-off of cog belt versus wrap molded is cost.... Cog belts cost more. But, that higher capacity for a given size belt can translate into fewer strands required for a given load. Decrease a sheave from four grooves to three and that lower amount of material in the sheaves can translate to savings.

Before you go running off to replace your wrap molded units with cog belts there are some trade-offs to consider. For applications where torque spikes are present, wrap molded units are typically a better choice. The lower coefficient of friction between the belt and sheave means the belt can slip when a torque spike occurs which can soften or absorb the spike isolating it from the process while protecting the motor and other drivetrain components. If a torque spike hits your process does it matter? The cover on the wrap molded units is designed to absorb slip when it occurs. Slipping of the raw edge belt may mean more aggressive wear for a cog belt than a wrap molded.

In applications where there is a fair measure of ambient grit contamination, use of a wrap molded belt may be a wise choice as well. The cover is designed to absorb more of the abrasive scrubbing action on the belt where the raw edge cog units are not.

Trade-offs can be good if you make them intelligently. A little extra inertia and load on a bearing may be just fine if you recognize it up front, because that will enable you to use a belt that will live longer in your application environment. Or a little extra belt abrasion may be the trade-off you make so you can use a narrower, lighter sheave in a location where you know the existing bearing may be marginally sized and where extra weight might give you bearing problems.

As a synchronous belt engages the sprocket, the teeth of the belt engage into the corresponding cavities of the sprocket. As this occurs, air is displaced and that can create noise. The wider the belt, the greater the noise can be. Differences in speed will impact this phenomenon. 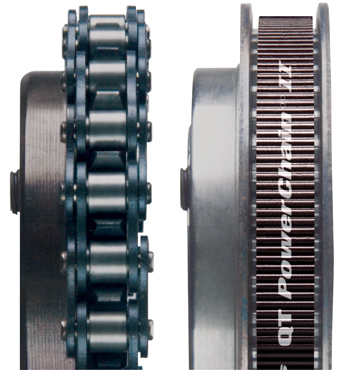 The more recently developed synchronous belts can carry more HP than previous versions. The impact of this is the same as with V-Belts. A belt that can carry more capacity can do so in a narrower sheave or sprocket than previous designs. That narrower width can mean less material and therefore lower cost. Plus, lower noise levels are achieved since there is less air to be displaced. The trade-off can be that a slightly more expensive belt drive will yield a narrower, quieter operating belt drive while lowering bearing side load.

There are several trade-offs between synchronous belts and roller chain drives. While synchronous belt drives will be more expensive, they will last longer; typically three times longer, but that can vary by application. Belt drives require no lubrication which can be a cost by itself and can result in contamination of the product being processed. Lastly, newer versions of synchronous belts are designed to limit stretch or elongation which can be a characteristic of the metal on metal wear occurring in roller chain. 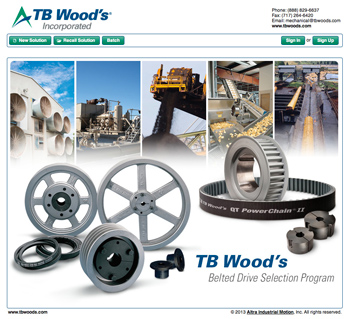 As always, it is wise to discuss theses trade-off issues with your belt drive supplier. Application assistance and sales staffs are usually available to help frame these choices for your specific situation and to help you understand the trade-offs you might be making. Most belt drive suppliers have simple-to-use online selection programs that allow for the easy selection and comparison of multiple belt drive solutions.