Manuals Save You Time and Money

Chances are that you know someone on your maintenance staff that relies totally on their experience, while disregarding the need to read manuals. They just plow ahead and try to make things work; and the fact is that as often as not, they are able to make things work. One of the reasons companies have application support departments is that while most of us can make things work, we don’t always get them to work well!

In an environment of global competition it is increasingly imperative that things work well, that they work efficiently and that they last long. To achieve those goals, attention to detail, awareness of proper installation and use are needed. Not only that, taking a few extra steps at the start can be a time saver in the long run.

Take for instance the installation and tensioning of V-belt drives. A new V-belt drive, regardless of size, will stretch some during an initial 24 to 48 hours of run time. Some belts take advantage of materials that stretch less while others trade off cost for a bit more stretch. The best of belts will elongate perhaps 1% while other designs will stretch up to 2-3%. What is true for all is that the majority of that elongation will take place in the first few days of running. Left alone, those elongated belts will slip more, wear more and overall run at a lower efficiency and have lesser life than a unit that is re-tensioned after the first 50 hours of run time. Taking the several minutes to remove a belt guard, re-tension the belt does create a downtime event. However, if those several minutes buy you a significant increase in belt life so that the belt will need replacement less often, it is a good investment of time since in the long run you will save the cost of new belts plus save energy since the belts will transmit power more efficiently. Plus, a planned downtime event to re-tension belts is much better than an unplanned belt failure.

Speaking of re-tensioning; along with our lack of manual reading often comes an absolute sureness in our perfectly calibrated hands. We know that our thumb can press on a belt and know that it is at the proper tension for that installation. Belt drive installation manuals as well as belt drive sizing programs provide belt tension for a given drive system such as the example shown.

Using a simple V-belt tension tester will ensure that your belt is getting to the proper tension even if your thumb is having an off day! 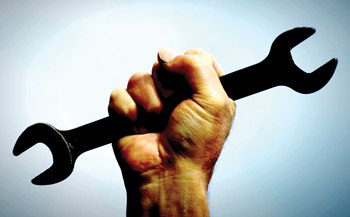 Along with our perfectly calibrated belt tensioning thumbs many of us want to believe that we have wrists that are perfectly calibrated for torque. We are just sure that when we tighten those bolts that our calibrated wrists have put just the right force on the wrench. Yet one of the most common causes of belt failure is that belt alignment has shifted when under-tightened setscrews or bushings have shifted. Worse are those situations where over-tightening of bushings cause them to crack or when over-tightening of fasteners damages hubs. In either case, the result can be shifting products that can become dangerous quickly. Use of a torque wrench that is set to the manufacturer’s recommended torque level will ensure that sheaves stay in alignment and coupling fasteners stay in place.

Mallets and 2x4’s are not recommended adjustment tools

Warner Electric ER brakes consist of a set of permanent magnets built into the electrically released brakes so that when power is turned off the magnetism from the permanent magnets causes the unit to engage and stop the load. They are commonly used for applications such as declining conveyors or vertical lifts where a power failure could become a dangerous event if the load were to accelerate under gravitational force. In these ER brakes, when power is applied the electric coil creates an offsetting magnetic field and the two sets of magnetism balance each other out so that the result is zero magnetism. To work correctly these brakes must be mounted against a surface that is non-magnetic. If they are mounted to a piece of simple steel or angle iron, the permanent magnets in the brake will magnetize the mounting surface. For that reason, in the catalog and in the manual is the following statement (circled):

Several years ago there was an instance where an ER brake was mounted against a steel frame. When the brake failed to operate properly, the maintenance staff had to whack it three times with a two-by-four to get it to disengage so it could be replaced. 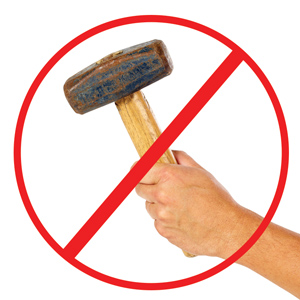 Work in our industry long enough and you will see it all. As the saying goes, "When your only tool is a mallet, everything looks like a nail". Mallets are used to align gearboxes. Mallets are used to ‘press on’ bearings. Tight fit? No problem; just give it a few 'love taps' with the mallet.

But Seriously, it is entertaining to share stories of this sort, but in a world where factories compete globally, installation and maintenance methods need to follow best practices. Installing and operating products to manufacturers' specifications will ensure that products provide the most efficient possible performance and longest possible life. Taking the time to read through a manual to get it right saves time and money.