A major paper mill in South America needed a belt drive solution for a new large vacuum pump installed at their facility. During the paper making process, vacuum systems are used to remove water and moisture from pulp as it moves along conveyors. The new pump operates 24/7/365 at around 240 RPM and is driven by a motor that generates 400 HP @ 1190 RPM.

The customer had been using both V-belt drives and gearboxes on other pumps throughout the facility. However, after evaluating all the various drive options, TB Wood’s, along with their distributor partner, recommended a synchronous sprocket solution for this specific application.

A TB Wood’s QT Power Chain® II synchronous belt drive system was installed on the pump and motor. The unique drive consists of two 224 and 50 tooth made-to-order sprockets and two 68 mm wide belts. The custom paired sprocket sets were designed with flanges on both sides to ensure belt alignment. A riveted ring between the two large sprockets prevents belt overlap. A Taper-Lock bushing was installed on the smaller sprockets, while a QD bushing was used on the larger sprockets. The large 400 HP motor was mounted on a sliding base which allowed for easy belt installation and tensioning.

The positive engagement synchronous drive provides many advantages over a V-belt system including no tension adjustment required which saves wear on belts and no belt creep or slippage which combine to improve efficiency while reducing maintenance and downtime.

The plant operator was somewhat skeptical about switching from their typical V-belt drive to a synchronous drive. However, they soon realized the value of the new reliable TB Wood’s drive system which will achieve close to 5% in energy savings while fitting on a much smaller area. The return on investment for the new system is expected to be in less than 18 months. 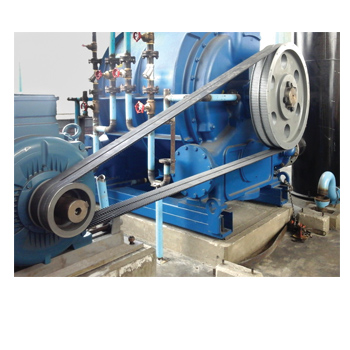