The continuing world demand for energy resources and raw materials from the earth creates a requirement for a rapid means of transporting the material from the mine to where it is used. Several methods for transporting these materials are utilized, depending upon the type of material, quantity, distance to be moved, location and surrounding environment to deal with. These methods include pneumatic, pumped slurry, vertical skips, tram-ways, large heavy-duty trucks and belt conveyors. Although each of these has certain advantages for specific applications, heavy-duty trucks and belt conveyors are the principle means used to transport the heavier, bulkier ores such as iron, copper, uranium, molybdenum, manganese, etc., as well as coal.

The higher initial cost of the belt conveyor is offset by the higher, on- going expense of trucks, such as the cost of truck mechanical maintenance and tires, the driver and the distance related cost of fuel. Needless to say, belt conveyors serve a vital link in the movement of numerous types of materials. They are used for many and various applications where the drives vary from low, single digit kW to several thousand kilowatts. They run cross-country, up steep inclines from underground or open pit mines, to and from storage areas, to processing operations, to load out devices or end use points. 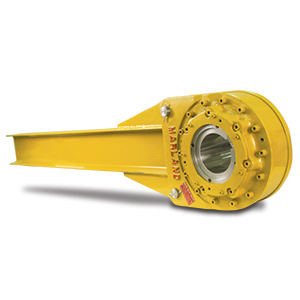 Inclined conveyors require an anti-runback device to prevent reverse movement of the belts. Such a device is referred to as a backstop, or holdback. Though backstops are most likely to be found on inclined conveyors, they are also employed on flat, overland conveyors to avoid the unusually severe shock loading on start-up where the loaded belt sags between idlers.

Without a backstop, a reversing conveyor can rapidly accelerate to a runaway condition, which can kill or injure personnel, damage or destroy drive train components, tear or rip expensive belting, or cause considerable other damage. A backstop is essentially a safety device which acts to prevent reversal thereby protecting against any of the above from occurring, as well as the massive clean up of material spillage than can occur.

Backstops can be classified either for low-speed or high-speed use. In the US, consulting engineering firms generally specify the use of low-speed backstops on all inclined conveyors where the motor kW exceeds 30 to 40. In addition to wanting to avoid the problems noted above, ours is a highly litigious society with large personal injury and product liability settlements. For this reason, consultants want to minimize the chance for trouble, thus specifying low-speed backstops.

There are three basic backstop designs that are or have been used to prevent anti-runback throughout the many years of conveying materials;

The advantages and disadvantages of these different designs is best shown in the table below:

The overrunning clutch type backstop is designed for precision operation, automatically engaging to transmit torque when relative motion is in the driving direction and freewheels when relative rotation is in the opposite direction. This design provides a wider operating speed range than other types of backstops and much greater torque ranges - in excess of 700,000 Nm. There are two basic types of overrunning clutch style backstops; roller on inclined planes and sprag clutches. 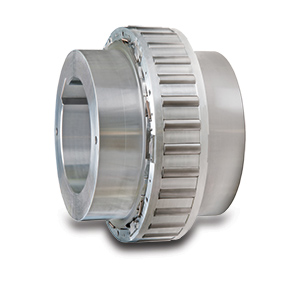 The roller on inclined plane design (Figure 1) consists of two concentric races, one cylindrical (the outer race) and the other precision machined with a series of inclined planes or wedge-shaped surfaces equally spaced around the circumference (the cam). Precision ground rollers are installed between the inclined planes and cylindrical race and it is the wedging action of the rollers between the two surfaces that transmits the torque. The rollers are separated from both surfaces by an oil film during freewheeling so no wear occurs in this mode of operation. When the clutch slows down as the pulley shaft decelerates, the spring loaded rollers overcome the viscous shear of the oil bringing the rollers up the inclined plane to insure automatic backlash-free engagement when the pulley shaft stops and tries to reverse. 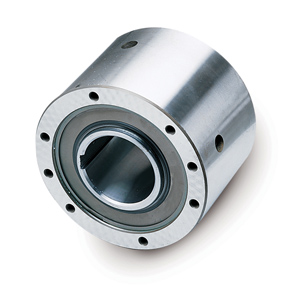 The sprag clutch design (Figure 2) consists of circular inner and outer races and a complement of non-cylindrical, irregularly shaped wedging elements or sprags. The sprags are installed in the annular space between the two cylindrical races. During freewheel, the sprags must be retained in position to engage, so these elements rub on the races. Since a backstop freewheels most of the time, this constant rubbing of the spring loaded sprags will produce wear both on the races and the sprags. When the sprags rotate to wedge between the races to transmit torque, they always engage on the same contact point of the sprag, unlike a roller which has an infinite number of points of contact.

This provides the most positive means of controlling belt reversal. Further, it also allows necessary service work on the drive components (i.e. reducer, couplings and motor) to be performed with ease as no reverse torque is present.

If space or some other factor is a problem for locating as above, then an alternative location would be to mount the backstop on the double extended low-speed reducer shaft. Mounting the unit in this fashion does subject the backstop to the inherent vibration in the reducer shaft together with higher operating temperatures. Either of these conditions could increase maintenance on the backstop. This does provide a more convenient location for servicing the unit than if it were located between the pulley shaft bearing and the low-speed coupling. With the backstop mounted on the reducer, if a failure occurred in the low-speed coupling, the conveyor would run back since the backstop would not be connected to the pulley shaft.

The vast majority of recognized engineering firms, both in the US and abroad, use the breakdown or stalled torque of the driving motor(s) to size a backstop. This method of sizing ensures that the backstop will not be damaged in the event the belt becomes jammed or stops due to an overloaded condition. Since there is no backlash in the backstop, the torque that it must be capable of withstanding is the equivalent breakdown torque of the driving motor(s) at the head shaft, which will be present in the system as stored energy or rubber band effect.

Most manufacturers of low-speed backstops have a prescribed method for size selection based on the torque rating of the backstop in conjunction with a recommended service factor to be used based on the maximum torque characteristic of the driving motor(s). The accompanying table shows typical service factors to be applied when size selecting backstops. Torque rating of the unit would include a motor torque characteristic of 175% as built in; i.e. a service factor of 1.0.

If two backstops are located on the same shaft, as shown in Fig. 4, they will not initially share the load equally.

How the backstops are installed, the positioning of the torque arm, bore and key fits, and maintenance of the backstops are among the factors that affect load sharing. Therefore, it is recommended that each backstop have a capacity of at least 70% of the total calculated reverse torque of the drive shaft. In addition, this provides some extra factor of safety over the theoretical 50% minimum torque required and should one backstop be required to carry a higher than normal torque load, it is fully capable of doing so without incurring any damage.

The backstop on the secondary pulley shaft needs only to be sized for the breakdown or stalled torque of the drive motor(s) on the secondary pulley shaft. If this tandem drive arrangement calls for two backstops on either the primary shaft or both shafts, the backstop size selection for the respective shaft(s) with dual backstops would require the same 70% sharing safety factor of the total calculated torque for the appropriate shaft(s).

Load sharing of backstops on conveyors with multiple drives is an extremely important factor. Although the overrunning clutch backstop has no backlash and, in theory, one would expect it to share the load on a calculated percentage basis, Marland’s 30-plus years of experience dealing with these multiple drive installations dictates the contrary. The 70% factor that Marland recommends has proven to be quite satisfactory over a long period of years and many successful dual-driven installations.

Several examples of size selecting the backstops for various applications are included for discussion. 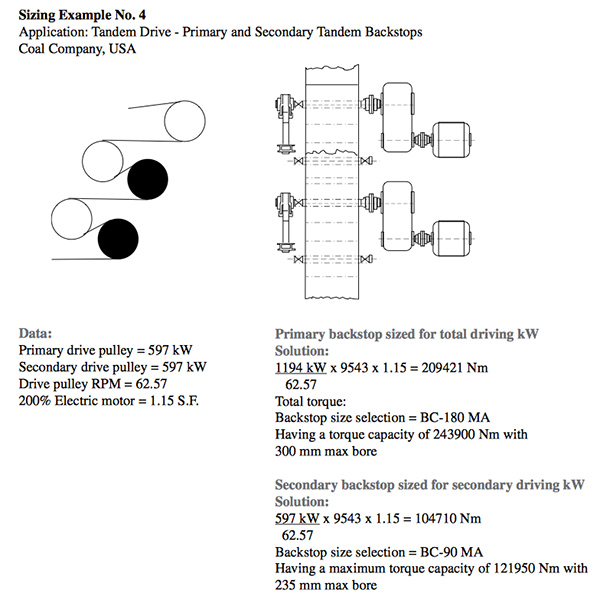