A large manufacturer of die cut lobster bibs was experiencing jams due to the high static cling generated by the web of plastic material as it moved through the process. The static was causing plastic pieces to adhere to equipment rollers, eventually creating jams that were very time consuming to clear.

The thin web plastics moved through the processing equipment at high speeds, typically in the range of 750 to 1000 feet per minute. Jams were occurring during the printing, folding and die cutting processes. Often it would be more than a minute before the operator realized a jam had occurred, which at 1000 feet per minute, generated a great deal of scrap and material to be cleared out of the machine before a re-start could be initiated. While the customer had included anti-static solutions in their process, jams continued to occur too frequently.

To improve the situation, the customer installed a Centric ORC overload clutch on the machine’s primary drive roller. The instant the load on that roller spikes, indicating a possible jam, the clutch automatically disengages the drive. The ORC size 2 clutch, with a torque range between 200 and 600 in.lbs, includes a plate actuator so that when the clutch disengages, the plate moves and trips an inductive sensor that automatically decelerates the process quickly.

Use of the ORC clutch prevents the worst of the overloads which significantly reduces the time to clear a jam and return to production. 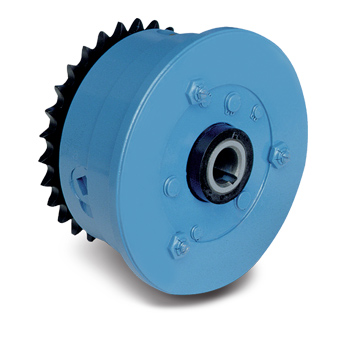