After decades of continuous operation, the Pentagon’s heating and refrigeration plant identified the need to overhaul aging chiller system equipment in 2013. Nuttall Gear was contracted to overhaul and modernize the speed increasers they had originally provided as part of new, large industrial chilled water systems installed in 1993. The speed increasers are positioned between the drive motor and compressor. The 3000-HP units have a ratio of 1:2.81 with an input speed of 1800 RPM and an output speed of 5070 RPM.

At the start of the project Nuttall Gear Field Service provided a conditional assessment of all speed increaser units on site in order to prioritize which units should be overhauled first. This was a critical part of the process, as the plant was expected to remain fully operational for the duration of the 15-month project. Units were restored to as-new condition at the Nuttall Gear factory and returned to the plant. The rebuilds included new gear sets, bearings and updated primary and auxiliary self-contained, force-fed lubrication systems.

In addition, a new replacement speed increaser was provided as a spare that could be used as a drop-in replacement on any of the 10 large tonnage chiller systems. This allowed the plant to continue to provide critical refrigeration service to the Pentagon during the overhaul.

Nuttall Gear has an extensive history of providing reliable and long-lasting speed increasers dating back to the 1940s. These drives operate in many diverse applications worldwide such as nuclear power generation, oil refining and chilled water plants. 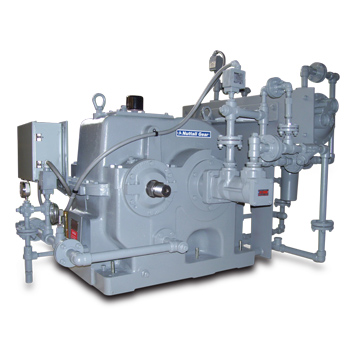