A large manufacturer of steel cans uses a vertical elevator to create layers of cans which are then stretch wrapped for shipment to their food packaging customer. The process allows for layers of cans to be lifted and a new layer formed at the bottom of the stack. The process repeats until a stack, about 10 ft. tall, is formed and then stretch wrapped to maintain the stack integrity during shipment. As the stack of cans builds, the weight being lifted increases with each layer.

A Warner Electric EM 210-20FBB brake, with an integral CBC-160 control, was incorporated to hold the stack in place after each vertical index lift and in case of a power loss. The brake is mounted between a 3-HP 182TC frame motor and custom gearbox on the elevator drivetrain. 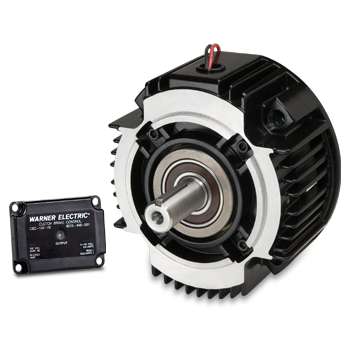