A leading manufacturer of food processing equipment needed a reliable gear motor for use on a new potato bin dumper. The OEM’s customer had been using bin dumpers with hydraulic cylinders that lifted and lowered the bins. However, ongoing maintenance issues and leaks caused the end user to look for an electric gear motor solution.

During processing, forklifts place loaded 4' x 4' x 4' potato bins (weighing up to 2,700 lbs.) onto the dumper. The dumper lifts and rotates the bin 135 ̊ in approximately 30 seconds, emptying the potatoes into a hopper that feeds them onto conveyors for transport to washing equipment. The gearmotors needed to exceed torque specifications, meet budget restrictions and provide long life for the end user.

While competitor models were considered, Bauer gear motors were ultimately selected for the application due to their higher service factor, which equated to a longer life. The OEM was also impressed with the high level of service provided by the Bauer engineering team, including same day response to specification and drawing requests.

Bauer supplied BK80 models which were mounted to a 4 in. dia. shaft. Motor speed and shaft rotation during lifting and lowering were controlled by a VFD (Variable Frequency Drive). The BK gear motors provided 90,000 in. lbs. (10,168 Nm) of torque at 1.1 RPM. Each custom unit was packaged with a torque arm, a single-disc holding brake and a shrink disc. The models also featured CORO3 epoxy coating for enhanced corrosion protection.

The BK80 models performed flawlessly during customer testing under load for 500 hours, which simulated usage by two shifts per day for one month. 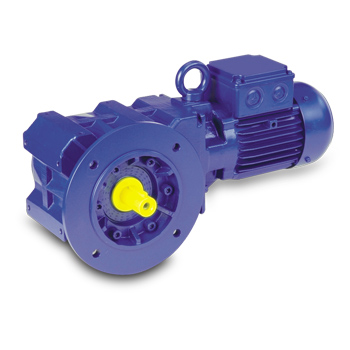