Since their introduction into the marketplace, 3D printers have revolutionized how manufacturers do business. The ability to generate extremely detailed 3D objects based on CAD drawings allows manufacturers to move rapidly from concept to prototyping and on to manufacturing.

With the cost of 3D printers falling significantly in recent years, more and more companies have been able to integrate this technology into their engineering design and manufacturing workflows.

At our Innovation Labs, Warner Electric has state-of-the-art 3D printers in specially constructed temperature- and humidity-controlled rooms adjacent to our engineering departments.

The printer can accommodate a variety of resin materials to meet unique part specifications. Warner engineers can utilize the printer to generate a part within hours compared to weeks, depending on the level of machining typically required. The 3D printer is used for prototyping new part designs and also for generating small quantity production parts.

An aerospace OEM asked Warner Electric to review an established clutch design to determine if it could be improved in a cost-effective manner.

The slip clutch is mounted within the power-operated drivetrain on cargo plane pallet lock down systems. The clutch disengages the drive when it senses 50 Nm of torque if the clamping system hits an obstruction during closing or opening. This prevents damage from occurring to the clamps, actuators, and drivetrain components which can be costly and more importantly take the plane out of service. 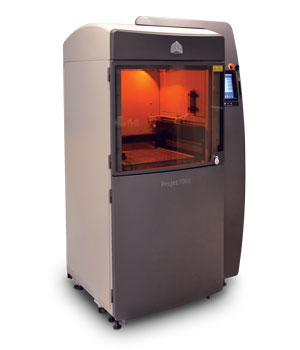 After careful analysis, the Warner engineering team developed a new unique prototype clutch solution. Within hours they also designed a test device to mount the new clutch so they could establish “proof of concept.”

The testing device was produced using Warner’s in-house 3D printer. The prototype clutch was mounted to the unique 3D printed device, and cycle testing was performed.

The process, from initial customer meeting to prototype development and testing, took approximately 3 weeks, much faster than if traditional engineering tools were used.