How To Achieve Cost Savings While Embracing Efficiency Regulations

The introduction of IE3 regulations and the anticipated arrival of IE4 presents an opportunity for businesses to embrace the latest in electric motor technology and also appreciate the cost savings that can be made. Manufacturers have developed new designs that will go beyond the required efficiency levels and enable operators to achieve significant savings in running costs.

While the main aim of efficiency legislation is to reduce overall energy consumption, and in turn the amount of carbon released into the atmosphere, the technology that has been developed will also benefit individual customers. By carefully specifying a new electric motor for a particular application, businesses can realize greatly improved lifetime operating costs while also benefiting from a shorter period of repayment for the initial purchase.

Electric motor manufacturers, such as Bauer Gear Motor, part of Altra Industrial Motion, have been given sufficient time to develop the required technologies and prove them in real life applications. While the legislation for IE3 came into force in January 2015 for motors above 7.5 kW, some manufacturers already offer an IE4 Super Premium Efficiency product, even for applications in hygienic or potentially explosive atmospheres. 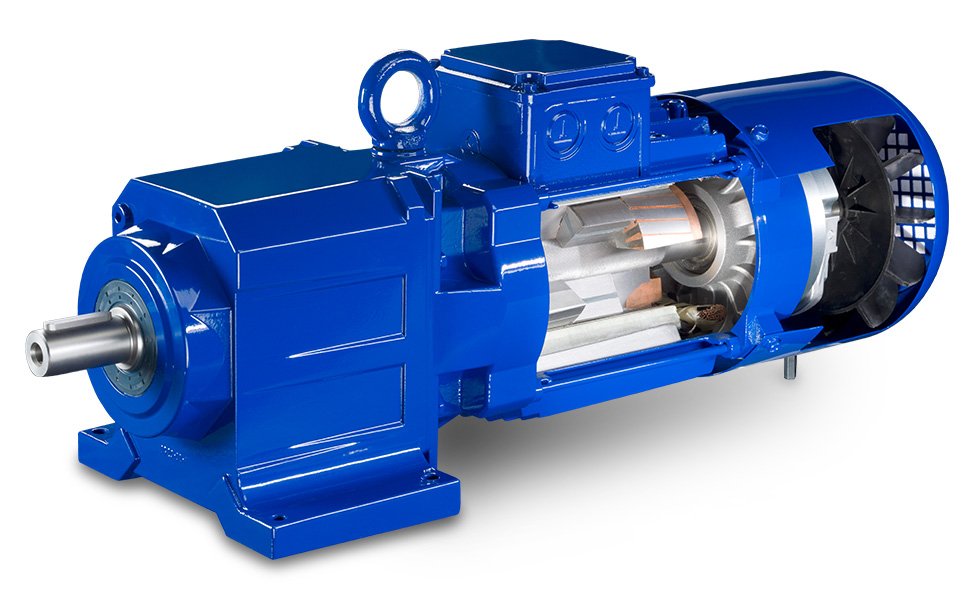 Bauer Gear Motor is one step ahead in terms of design and efficiency with its complete range of energy efficient geared motors already in the marketplace.

However, anecdotal evidence would seem to show that some customers who could benefit from the latest technology are cautious about investing in higher levels of efficiency because of the price differential between a traditional design and a permanent magnet synchronous motor (PMSM). These concerns can be addressed by examining the scale of the cost savings, looking at the return on investment (ROI) and ensuring that any new motor is properly specified for the application.

Motors that meet the proposed IE4 energy efficiency standards, such as Bauer’s PMSM range, are usually permanent magnet arrangements, where the permanent magnets maintain their own persistent magnetic  fields. These are more expensive to manufacture, but significantly more powerful than standard magnets. When used in a motor application, an inverter drive is usually required to power the motor, but the efficiency can be near 96%.

It is well known that electrical motors use 70% of the energy utilized by industry, but a lesser known fact is that 96% of the lifetime costs of an electric motor are associated with energy consumption. This shows the importance of the overall efficiency compared to the initial purchase cost in the terms of the total cost of ownership (TCO).

In today’s market, energy efficiency has to be one of the key determining factors when specifying new motor solutions. Energy prices are expected to continue to rise so it is important that the lifelong running costs are considered; rather than simply the cost of procurement.

So far we have seen that improved technology and efficiency translates into a higher initial purchase cost, which is later recovered during the operational life of the PMSM. In order to prove this, Bauer Gear Motor agreed to participate in a direct comparison where an inverter driven asynchronous motor (ASM) and a PMSM were set up to perform identical tasks. The comparison was conducted on an operational waste water treatment plant in Germany with both motors powering a disc thickener for seven hours every day.

Many of the processes in the water treatment industry require continuous operation, where the load may vary in response to changing conditions. Many of the applications for electric motors in this industry could benefit from new motor technology that would deliver significant energy savings across each site. In this case the trial set out to discover if the initial purchase cost of an IE4 motor can be recuperated by a significant reduction in operational costs.

The trial used the same frequency inverter and gearbox so as to ensure that any differences efficiency could only be attributed to the motors. The results demonstrated that the PMSM delivered a 40% savings in energy consumption versus the ASM, which, when projected over a 4 year period, would save 1,022 kWh. As the price of energy looks to rise, so the value of this saving will increase also.

All motors manufactured by Bauer are at least IES1 ready and its experienced engineers can provide expert assistance in selecting the most appropriate equipment.

The PMSM series from Bauer is an environmentally friendly range of motors, employing a highly efficient rotor design that integrates embedded permanent magnets made from the rare-earth group of materials, instead of the squirrel-cage rotor found in conventional induction motors.

This design offers a number of key benefits. It reduces heat losses from the rotor by 100%, total losses by approximately 25%, and increases total efficiency by 10% or more. For the PMSM user, this improved performance translates into lower total cost of ownership, a reduction in CO2 emissions, and ongoing savings that buffer against future increases in energy costs.

Of these advantages, the most notable is the considerable improvement in efficiency when compared to induction motors, even under partial load conditions, and the extremely high efficiency under rated operating conditions.

PMSMs also have considerably higher power density, which, for geared motors, yields higher system efficiency with minimal installation volume – and also reduced weight. This is because, with an induction machine, part of the stator current is required to “induce” rotor current in order to produce rotor ux. These additional currents generate heat within the motor. Whereas, in a PMSM, the rotor ux is already established by the permanent magnets on the rotor.

This higher power density has allowed the development of a PMSM with low rotor inertia, which is capable of providing a faster response. Furthermore, PMSM drives can produce higher torques for the same installation volume as conventional induction motors, a factor that often allows further cost savings through the ability to specify a smaller motor size.

However, this is not the end of the story. New standards have also been developed to take into account of the starter systems as well as the equipment that is attached to the electric motor. The objective is to simplify the task of specifying the components within a drive system by enabling comparisons to be made between similar pieces of equipment.

A specifier or an end user is currently unable to compare the different competitive components of the drive system in order to choose the most efficient motor and inverter components. A similar situation arises when the motor is integrated into a product, such as a fan or a pump, where the motor’s performance cannot be measured independently from the product. In order to address these situations and to improve the potential energy savings in these areas, a new standard, EN50598, is being developed which benchmarks the efficiency ratings of power drive systems (PDS).

The development of IE4 technology is not restricted to conventional applications. It can also be applied to the special hygiene demands of industries such as pharmaceuticals and food & beverage, where specialized components typically have to be specified that can withstand the regular cleaning regimes and guarantee clean operation without risk of contamination.

The engineers at Bauer are committed to developing solutions for specialized industries where energy efficiency is a high priority. One example is the industry-leading, IE4 AsepticdriveTM, a stainless steel modular geared motor whose construction significantly reduces the risk of the hygiene rating becoming compromised in the event of an impact or due to prolonged periods of use in heavy washdown environments.

The improvements in energy efficiency that can be gained through careful product selection will benefit not only end users but also OEMs. For many applications a smaller PMSM can be used in place of a larger ASM, allowing smaller components to be selected through the complete energy chain. Coupled with the proven reduction in operational costs, the latest motor technology certainly has a major role to play in the future.