The constant increase in demand for electrical power around the world requires more generating capacity to be installed for both local and national use. One of the most efficient and controllable sources of energy is produced by aeroderivative gas turbine engines that are reconfigured by engineering companies such as the IHI Group and employed in combined cycle gas turbine (CCGT) power plants.

Traditionally, the power application has been for peak power generation, taking advantage of the fast start-up and good load-following abilities of aeroderivative units. These same characteristics make the turbines extremely valuable for helping to maintain grid stability during periods of peak demand.

The IHI Group, based in Japan, is one of the biggest engineering and manufacturing companies in Japan, involved in delivering large scale power and construction projects. One aspect of the business is developing jet engines that were originally designed for aerospace applications and adapting them to generate electricity in a land-based power station. Two of the crucial components within a new installation are the couplings that connect the rotor shaft of the turbine to the gearbox and the gearbox to the generator. The latter, known as the low speed coupler, also acts as a safety device that protects both the turbine and the gearbox in the event of an overload situation. The IHI group has been working closely with Bibby Turboflex, which is part of Altra Industrial Motion, to develop a set of high performance components that can be simply manufactured to suit each individual application.

Steve Broomhead, European Sales Director for Bibby Turboflex, comments: “As a market leader in the design and manufacture of flexible couplings for over 80 years, Bibby Turboflex has extensive expertise in developing solutions for the most challenging turbomachinery applications. The company’s High Performance couplings deliver an excellent basis from which to create both the high speed and low speed couplings for the CCGT application.”

Any project to create a gas turbine generator works to a precise build schedule, with lead times for individual components playing a major role. IHI required a matched pair of couplings, capable of transmitting the immense power of a General Electric LM6000 aeroderivative gas turbine that could also be designed and manufactured in approximately 14 weeks.

The GE LM6000 typically develops 40 MW of power but this can be increased to around 50 MW of rated power by installing a number of options in the design. The engine rotates at 3,600 rpm and the high speed coupling, which is typically around 3.5 meters long, connects the turbine to the gearbox – which reduces the speed to 1,500 rpm. The reduction in speed equates to an increase in torque, which means that the low speed coupling must be designed to transmit the high torque levels created by the gearbox. Both couplings are designed within API671 which requires some very high level specification and traceability for the components.

Bibby Turboflex manufactures each and every bolt used in the construction of the couplings using aviation grade S5.99 stainless steel. The individual bolts are laser etched with cast numbers and serial numbers that allows the entire manufacturing process and the original material source to be traced.

The low speed coupling employs a set of shear pins that provide a simple, effective and precise method of disconnecting the drive system in the event of an overload. This design offers a number of advantages, especially in terms of the time required to replace the shear pins following an overload situation. Typically, this can be completed in less than half a day, compared to several days that may be required for the majority of alternative designs.

Meanwhile the high speed coupling uses a coplanar arrangement at its turbine end. The interlocking element and spacer end flanges have the advantage of keeping overhung mass as low as possible thus minimising the load on the turbine shaft bearing. 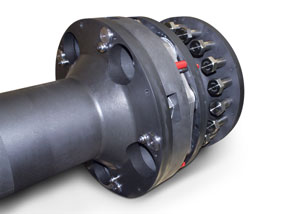 The low speed coupling employs a set of shear pins that provide a simple, effective and precise method of disconnecting the drive system in the event of an overload

In the power generation sector, faultless reliability is an essential requirement, but, in the event of an unexpected situation, it is essential to get the equipment up and running as quickly as possible. Therefore employing a system that is quick and simple to replace has a distinct advantage. In many cases it is necessary to disassemble sections of the drive system and the replacement components need to be fitted and balanced before the generator can be restarted.

The project between Bibby Turboflex and IHI has produced a coupling design that can deliver the full rated power of the GE6000 aeroderivative turbine and can also be adapted to suit each installation, with complete engineering drawings being supplied prior to manufacture. The ease of installation and simple procedure for replacement of the shear pins combined with the overall robust design has delivered a package that IHI will be specifying for their future projects.