As much as its tunnels and trains, London Underground (LUL) relies on its escalators to keep the city moving. The 430 escalators on the network help passengers make more than 1.3 billion journeys every year. The longest, at 60 meters, is installed at Angel station on the Northern line, while its shortest cousin is a 4.1 metre baby at Stratford in East London. The busiest single station, Waterloo, has 23 escalators that carry nearly 90 million passengers a year.

Mass transit escalators like those used on the Underground are the heavyweights of the moving staircase world, weighing upwards of 40 tonnes and containing around 15,000 moving parts. They move faster than escalators used in department stores and shopping arcades - 0.75 m/s as opposed to 0.5 m/s - carry more people and operate continuously for up to 20 hours a day, 7 days a week, 364 days a year. They also need to be extraordinarily reliable; the design life of escalators on the network is 40 years, and major overhauls are completed after 20 years of operation. Over its working life, a typical escalator will travel the distance to the moon and back. Needless to say, they must also comply with extremely stringent safety standards.

An escalator’s braking system is a critical part of an overall performance package that includes communication, fire detection and suppression systems. Designed to operate in the event of a power failure, emergency stop signal or mechanical problem, escalator brakes must bring the machine smoothly to a halt, and hold it securely until the machine is restarted, all without relying on any source of external power.

For the past 25 years, many of those braking systems have been supplied by Twiflex, part of the Altra Industrial Motion group of companies. Twiflex supplies brakes and associated hydraulic control systems to several of the major escalator manufacturers, and to London Underground Limited and its contractors as part of overhaul and upgrade programmes. 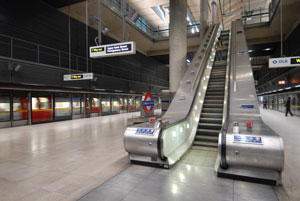 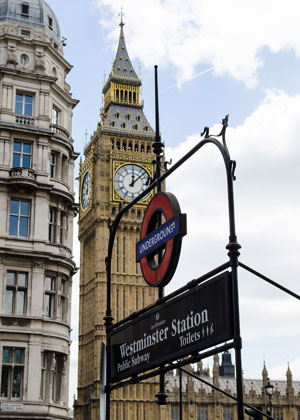 London Underground (LUL) relies on its escalators to keep the city moving. For a quarter of a century, braking systems from Bedford-based Twiflex Ltd have played a vital but hidden role in London’s transport system.

A “mass transit” escalator braking system typically consists of two disc brakes: a ‘service brake’, operating on the high speed shaft between the main drive motor and the gearbox, and an ‘auxiliary brake’ installed after the gearbox directly on the escalator head shaft.

In normal use, the service brake controls the deceleration of the escalator, with the auxiliary unit engaging after a defined delay to hold the machine in a stationary position. In the event of a failure in the gearbox or main drive chain, however, the delay is bypassed and the auxiliary brake must also be able to stop the escalator by itself.

Progressive application is a vital part of comfortable operation. If the escalator slows too rapidly, it risks unbalancing passengers, so deceleration parameters are tightly controlled. The system must also stop the machine within a specific stopping-distance range with widely varying passenger loads.

Tony George, Twiflex Product Manager explains how its braking and control systems achieve these demanding criteria. “The majority of brake systems we supply for escalator applications are spring actuated and hydraulically released. The service brakes have a self-adjusting feature that automatically compensates for wear, to keep a constant air gap between disc and pad, and maintain consistent response times,” he says. “In normal operation, the control system uses a ‘fast approach, soft braking’ strategy, so it closes that air gap very rapidly, before progressively building to full torque. The delay designed into the auxiliary brake control means it then applies as a static holding brake.. Of course, the control system is designed to operate entirely passively, in the event of a loss of external power.”

As well as supplying new brakes, Twiflex service engineers are also involved in inspection and troubleshooting activities across the network, and in site surveys for upgrade and renewal activities. Twiflex brakes have also been installed on escalators in a number of other major underground rail networks around the world, including the Washington DC Metro (WMATA) and New York’s subway network (NYCTA).