Are motors the tip of the iceberg when it comes to improving drive train efficiency?

Fuelled by the introduction of more stringent IE efficiency classes, manufacturers are chasing headline efficiency figures which could only have been dreamed of just 10 years ago. There’s no denying that this is a positive thing for industry, but is motor efficiency just the tip of the iceberg?

As a leading manufacturer of high efficiency (IE2), premium efficiency (IE3) and super premium efficiency (future IE4) motors, Bauer Gear Motor is well placed to understand the value that a motor’s performance can place on the end-user’s running costs. However, its engineers are keen to stress to anybody who asks them that the motor is just one piece of the puzzle. 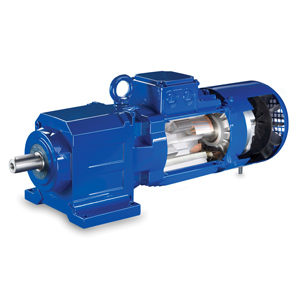 The Bauer IE4 Super Premium Efficiency Permanent Magnetic Synchronous Motor is just one piece of the puzzle for a highly efficient and cost effective drive train.

Rather than breaking down the drivetrain into different sections and focussing on a single component, such as the motor, Bauer believes that a view should be taken of a single, ‘Electro-Mechanical’ package; one which must be fully integrated to achieve maximum performance. In fact, despite the current focus on motor efficiency, the potential energy savings throughout the drivetrain can typically be distributed via the ‘ZVEI’ model:

As the model shows, while it’s motors that are currently grabbing the headlines for development, there’s no point specifying the latest motor if the foundations aren’t already in order.

Using a speed control device to monitor and regulate a motor will straightaway make a significant improvement to any application that doesn’t require the motor to operate at full load at all times. In fact, even when operating at full load, a motor with a variable speed drive installed will still be more efficient at start-up. The importance of speed control in real world efficiency is recognised by the introduction of Regulation 640/2009. This stipulates that from January 1st, 2015, any installation in Europe where an IE2 rated motor between 7.5 kW and 375 kW is specified, it must be installed with a variable frequency drive (VFD).

Bauer has developed relationships with many of the leading manufacturers of speed control solutions to work hand-in-hand with its products to maximise the efficiency of its systems.

Specifying the most efficient gearbox allows you to transmit a larger percentage of the motor’s power for its intended function. A well specified and efficient gearbox will avoid unnecessary oversizing, saving money from the outset, and reducing system losses in operation. It’s these system losses that are a major factor in the EN50598 standard, which awards the new IES efficiency classes based on the efficiency of the complete power drive system. 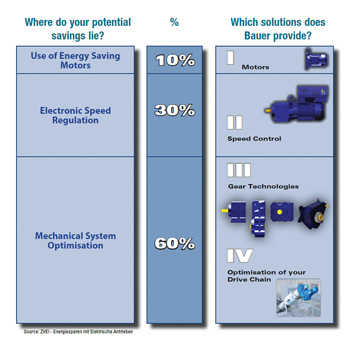 Bauer has been manufacturing Gear Technologies since 1927, throughout these nearly 90 years it has always strived to offer the most efficient and reliable solutions possible. It’s found that offering modular solutions makes it easier to build bespoke packages with ideal reduction ratios for a given application. Its models include the helical BG series, parallel shaft BF series, bevel BK series and worm drive BS series. Application specific models are also available; including a stainless steel version which, when combined with its twin motor, creates the world’s first modular stainless steel IE4 permanent magnetic synchronous geared motor for the food and beverage industry.

Drivetrain optimisation is the last piece of the puzzle, but no less important than the considerations that have come before it. Once each aspect of the drivetrain has been specified, it must then be integrated into the machine with as much efficiency as possible. This requires an in-depth understanding of the drivetrain as well as the specific demands of a given industry, which is why Bauer has a team of application experts who specialise in different industries.

None of this is to say that the steady improvements in motor efficiency are unimportant. The gains that have been made in the last decade are staggering, and beyond comparison to the relatively mature, and therefore slowly developing gear and drivetrain technology. It’s important that an efficient mechanical system is specified as a foundation, but, once that’s in place, significant savings can be made by combining the latest electric motors with well integrated inverter drives.

To return to the iceberg analogy, the advancement being made within motor technology really is the visible tip. It’s attention grabbing which helps make us realise that system efficiency is something that we should be taking action over. However, the real consideration lies beneath, because without a properly specified drive train, an IE4 motor on its own will never meet the full efficiency potential.