In 2016, more than 3,000 high school teams from 24 countries participated in the annual FIRST (For Inspiration and Recognition of Science and Technology) Robotics Competition. The teams are required to design and build a robot that meets certain specifications. The robots are controlled remotely as they move through a challenging obstacle course. Points are scored as the robots breach their opponents’ fortifications, weaken their tower with boulders, and capture the opposition’s tower.

Aftershock, the team from Sacham High Schools North and East, located in Long Island, New York, had a problem with the enclosed worm gear boxes they had chosen and purchased. The gearboxes did not provide enough torque and had constant breakdowns due to the rough nature of the game. Since a standard gearbox that fit the tight envelope requirements of this retrofit application did not exist, the students had to design and manufacture their own using lathes for the axles, mills for housing parts, and a Shop Bot (CNC) for the side plates.

Based on his previous engineering experience, the team’s advisor contacted Boston Gear for help with the gearing solution that would provide the correct amount of torque and still fit in the space available. In response, Boston Gear donated four mated worm gear sets which were needed to turn the robot’s four wheels that moved the 120-pound device through the game obstacles.

After successfully competing in the regionals, Sacham Aftershock Team 263 was invited to participate in the world championship held in St. Louis, Missouri where they made it into the Quarterfinals. 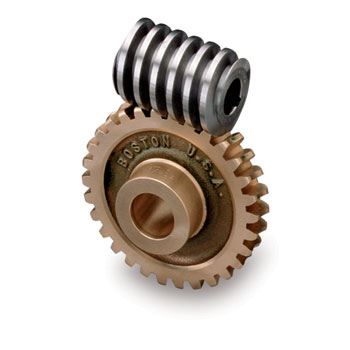