In many modern stage productions, motion on the set is an intrinsic part of the magic. Performers fly through the air, stage elements rise and fall and lighting rigs shift dynamically to suit the action. Since 2013, advanced electric brake systems from Warner Electric, part of Altra Industrial Motion, have played a quiet but critical role in a growing number of major theater and stadium shows; working quite literally behind the scenes.

The challenge for production designers – and for the specialized companies that build equipment for stage shows and events – is to create seamless, spectacular effects while ensuring that everything they do complies with strict industry standards. The widely used German BGV-C1 regulations, for example, set out the requirements for staging and production facilities in the entertainment industry (specific items of equipment, like moving spotlights and flying systems have their own specific standards too, and some other countries have their own national norms). BGV-C1 requires moving parts of above stage and under stage machinery and their loads to be equipped with devices to protect against inadvertent movements, and for them to be equipped with devices that can bring the loads to a standstill if a fault occurs.

Electric drive systems for stage machinery are becoming increasingly popular, allowing designers great freedom to move large loads and seamlessly coordinate multiple mechanical elements. For many of these applications, electrically-operated brakes provide a very effective way to deliver appropriate control capabilities. Designed to accommodate ‘emergency stop’ requirements and to operate in the event of a power interruption, these brakes typically use springs to apply the required braking force, with an electromagnet that, when energized, overcomes the spring force to allow the brake disc to turn freely.

For Warner Electric, entry into the world of the theater arose as a result of its leading position in the supply of electrically-operated brakes to the elevator market, which has similar requirements for reliability, rapid actuation and precision control.

“When we looked at theater and stage applications, we identified a need for a wide range of braking capacities, from 3 Nm up to 5,800 Nm,” explains Bernd Wimmer, the company’s account manager for the sector. “All these applications require short response times, silent operation and compliance with the latest directives and norms.” Warner knew it had access to the technologies that could deliver these requirements. The company’s advanced damping systems, for example, use a special foil to minimize noise and vibration, creating brakes that produce sound emissions as low as 45 dB(A).

Speed and silence are important attributes, but so is control. The deceleration of stage equipment must be closely managed to prevent excessive stress on components and to protect performers. That calls for careful selection of brake size, operating parameters and friction materials. “Most of the time, brakes are used for static holding applications, but they have to be able to perform an emergency stop too, which is a tricky thing to engineer,” explains Wimmer. “A hoist, for example, could be operating at full speed in an upward direction. When the drive stops, the inertia of the load means it will continue to move upwards on the rope, then fall back, creating stress on all connected components.” 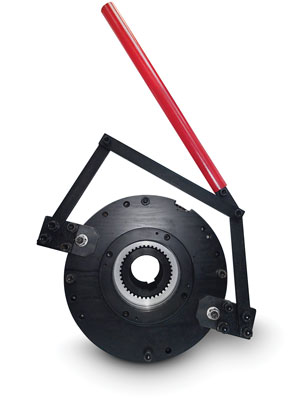 Warner Electric has developed a range of theatre-specific modular brakes.

And in an environment of highly varied, often one-off, applications that are typically designed and manufactured to tight timescales, finding the right solution can be demanding for equipment makers. “The short lead times and sheer variety of stage applications makes it very different from the elevator market,” explains Wimmer, “so we realized we would need a different approach.” That approach encompasses the whole brake supply chain, from product design to customer support.

Warner has developed a theater-specific product range, for example, using modular designs based on its well-proven PK brake series for lower torque requirements and its FENIX elevator brake range for high energy applications. The modular brakes are available with different friction materials and control configurations, and single or double brake rotors and control circuits, according to the degree of redundancy required by the application. “Some applications have two independent brakes, on either side of the gearbox, with two independent control circuits on each, so there is still a high degree of control and redundancy in the event of a failure in the gearbox itself,” notes Wimmer.

To help its customers design the right solution for their application, Warner’s application engineers offer extensive calculation support, while the modular design of the brakes allows the chosen configuration to be assembled quickly and fully factory-tested before delivery to the customer. Typically, says Wimmer, the whole process takes eight to twelve weeks from specification to delivery.