A manufacturer of low- and high-rise elevators faced a challenge when customers began calling for a flexible elevator to meet the needs of the growing mid-rise, mixed-use building market. The global construction boom of mid-rise buildings can be attributed to several factors. Developers are more apt to build “short” because it requires less capital and the time to get permits approved is reduced considerably, especially in developing countries.

In response to this growing demand, the elevator OEM began developing a new elevator design that was adaptable for a variety of mid-rise buildings including apartments, hotels, offices, and shopping centers. To ensure global acceptance, the new flexible elevator was designed to meet building codes around the world.

The technology of elevator manufacturing is changing as OEMs migrate from using standard steel ropes to using innovative belts. One consequence of the change is increased constraints for the braking system, resulting in a difficult specification for this design. The company called on Warner Electric, part of Altra Industrial Motion, to develop a braking system for the challenging gearless motor elevator application that required dynamic torque less than 160% of nominal torque, noise lower than 54 dB, and very high energy up to 57 kJ (Figure 1).

The braking system had to provide the following three functions:

Warner Engineers developed a solution that had low wear but high energy, noise dampening with low torque impact, and torque stability and precision. To meet the criteria, two modified ERS VAR15 spring set/electrically released brakes with fixed magnets and a floating disc were designed. The floating disc is connected to the shaft that rotates to move the elevator up or down, and a set of springs inside. the brake module can press a plate against the disc. With power, the magnetism pulls the plate away from the disc, compressing the springs and allowing the disc to rotate. This allows the elevator to move. When power is cut, the springs compress the plate against the rotating disc to stop or hold the elevator in place.

The disc is splined and mounts to a mated splined hub so that it can move slightly along the hub. When the brake engages the disc, it does so on both sides. Since the plate floats, it can receive equal compression from both sides of the brake. 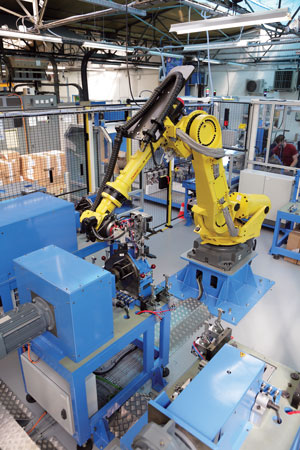 The modular, compact units allowed the configured system to fit within the customer’s tight footprint. Units are microswitch equipped and conform to European Lift Directive 2014/33/EU (EN 81-20 and EN 81-50 certified). To meet the tight footprint, the design team needed to choose the best compromise between maximum energy versus wear, maximum torque limit versus noise, and 100% adjusted brake (6 sigma oriented) versus production cost.

Thermal control was a key issue due to the system’s high-energy braking. Heat is not dissipated, but must instead be absorbed by the system. This was a major criterion that impacted the overall brake design and friction material selection.

The OEM team was in regular contact with Warner Electric’s engineering team during all the development phases of the project, including many meetings in person. Various performance curves, statistical analysis, and test reports were provided to the customer to validate the brake design and performance.

The brakes were subjected to a full array of lengthy testing including energy, life cycle, climatic, aging and destruction tests. Pre-packaged brake assemblies were delivered to the customer with ready-to-mount paired magnets and burnished discs.

The new production enhancements to the Warner Electric plant in Angers, France will allow Warner to more effectively meet the anticipated demand for the new elevator brake from Europe, Asia Pacific, and Latin America.

For more information about the Warner Electric products used in this application, visit www.warnerelectric.com.