Most accidents on mining conveyors are caused by the stored energy in the belt. If not properly protected, a loss of power at a mine can allow loaded inclined conveyors to reverse direction, causing damage to expensive equipment. With the resulting loss of productivity, it is no surprise that safe conveyor operation is a major concern for mine owners and conveyor system OEMs around the world.

Reverse rotation of conveyor belts can be prevented by installing a standard backstop or a torque-limiting backstop. However, to allow the crew a safe maintenance routine, a loaded conveyor belt needs to be slowly rotated backwards to clear the belt.

To address the problem, Stieber Clutch introduced a new series of torque limiting/load sharing backstops with release functionality. The release function allows the tension of a jammed belt to be carefully released using a simple hydraulic pump to actuate the internal hydraulic cylinder.

The components, which offer the possibility to rotate backwards under load, are fully bearing supported. The new torque limiting/load sharing backstops are capable of performing as many reverse rotations as may be required (within the limits of energy dissipation) to completely unload the conveyor prior to maintenance work being carried out. This feature can significantly reduce downtime and ensure that any loss of productivity is kept to a minimum. When the oil pressure is released, the backstop is automatically re-set to the original slipping torque.

Stieber RDBR-E roller ramp type low-speed backstops are externally mounted, self-contained on a shaft extension with a torque arm. With an internal torque limiter, the RDBR-E is designed for use on large inclined conveyors, where a release function or load sharing is required. The RDBR-E also protects the conveyor belt system by cutting peak loads. 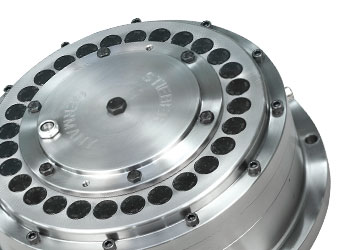 The Stieber RDBK is a centrifugal lift-off sprag type backstop with an internal torque limiter which is designed for use on the high-speed or intermediate shaft of the driving unit in multi-drive systems, such as on large inclined conveyors, where two or more backstops share the reverse load. These innovative backstops provide up to 3.5 times more torque capacity within the same volume and up to 15 times more energy dissipation than other conventional designs. 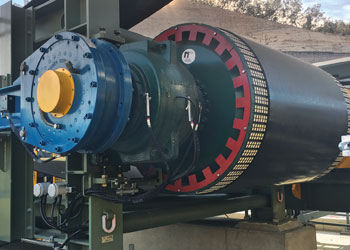 Dual RDBR 300 models with 70 kNm torque per unit are installed on the 3,050 m (1.9 mile) long drift conveyor at the Moolarben Coal Complex in Australia. The inclined conveyor transports coal from the longwall system underground to the surface and features an 80 m (262 ft.) lift and has a capacity of 4,500 tph.

A load-sharing, releasable backstop solution was needed for use on new conveyors at the Moolarben Coal Complex in Australia. When fully operational, the massive facility will produce approximately 17 million tons of coal per year. The backstops are installed on the mine’s 1800 mm (5.9 ft.) wide, 3,050 m (1.9 mile) long drift conveyor that transports coal from the longwall system underground to the surface. Additional releasable backstops were also required for the mine’s surface ramp conveyor. 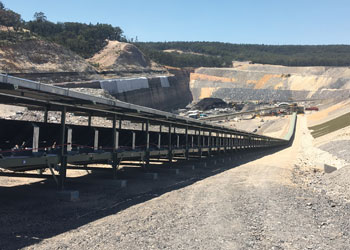 The Stieber backstops were chosen to meet the tough conveyor application requirements due to their superior release functionality.