Maintenance of wind turbine generators (WTGs) aims to sustain efficiency levels and ensure continued reliability, whilst also dealing with any other concerns that may be raised. One issue that is becoming more common is noise generated by the operation of the equipment in the nacelle, as opposed to any noise from the turbine blades. Svendborg Brakes has turned its expertise on yaw brake noise and developed a solution that can be applied to the majority of installations.

Yaw noise is a significant contributor to the noise produced by WTGs and can be created by the contact between the yaw brake pads and the disc during nacelle adjustment into the wind. The brakes are released sufficiently to allow the yaw motors to turn the nacelle into the wind before being reapplied to hold the position.

Investigation into this noise has shown that there is a direct relationship between the amount of noise and the glazing on the brake pad surfaces.

While the nacelle is facing directly into the wind the yaw brakes are pressurised to around 160 bar, but when the nacelle needs to turn, this pressure is reduced to around 30 bar. This enables the yaw motors to adjust the direction of the nacelle without losing control of it.

As the brakes are always engaged, a small amount of powdered friction material is created, along with some particles from the disc. At the low pressure used during yawing, some of the powder created between the pad and the disc sticks to the pad surface, giving it a glazed appearance. This phenomenon is not unique to WTGs, it can happen to all types of brake.

This issue takes time to develop and recently installed WTGs are unlikely to give cause for concern. However, with a small number of WTGs, this problem can appear later. 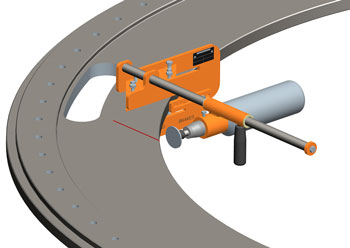 To help independent service providers (ISPs) as well as original equipment manufacturers (OEMs), Svendborg Brakes, a global expert in braking technology and part of Altra Industrial Motion Corporation, has completed an in-depth analysis of the issue. The outcome has been a patented innovation that delivers a long-lasting solution that can be employed by Svendborg Brakes engineers or those working for ISPs.

By cutting a specially-shaped groove into the brake disc it is possible to remove existing glazing and prevent it from occurring in the future. The groove does not increase brake pad wear significantly, but it does help to remove the build-up of powdered material in conjunction with a brush that is installed at the same time.

Tests have shown that grooves cut into the brake disc removed the glazing on the brake pad and increased pad wear by only 3.5 percent, when operating at a pressure of 30 bar. These tests were conducted using brake pads from Svendborg Brakes that include a slot in the friction material that also helps to keep the braking surface clear of debris.

What became very apparent from the testing was the importance of the size and shape of the groove. This made it essential to create a system that could replicate the most efficient design of groove and enable engineers from ISPs to be able to carry out the work.

The testing resulted in a kit being created that would enable an engineer to install eight grooves in total, four on the upper surface and four on the lower surface of the brake disc. The kit includes the fixturing template to correctly align the groove on the disc. The process should take approximately three hours to complete one turbine.

Having created the equipment required to install the grooves and the most efficient process to complete the task, Svendborg Brakes applied for, and received, a patent for the solution. Those wishing to use this system to reduce noise within the yaw control system can do so under the terms of a signed license agreement.

However, it is important to correctly diagnose the source of noise during yawing as it is not always attributable to the brakes. Maintenance engineers should check for oil leaks from the hydraulic power units (HPUs) and yaw bearing seals as any oil or grease on the brake disc is a cause for concern.

Noise can also be generated by the main yaw bearing as well as incorrect mesh of the yaw drive gear or the yaw drive gear motor brake not releasing. Many of these issues should be resolved during routine maintenance without the need for specialist equipment or knowledge beyond normal procedures for WTGs.

Over a period of 18 months, Svendborg Brakes was involved with the modification of 25 WTGs where the groove solution was installed on units from various OEMs. Since this work was completed, none of the WTGs have so far produced any noise from the yaw brake system. In addition, other WTGs that were not fitted with components from Svendborg Brakes have also been successfully modified by the patented process, which opens this solution up to the majority of generator installations.