The value and importance of the Mississippi River as a shipping network is hard to exaggerate. The river network extends throughout many of the central states and eventually deposits into the Gulf of Mexico, making it a key route for exported goods into central and southern America. With corn export being a key product for the USA’s economy, it’s vital that this transport network operates efficiently. Svendborg Brakes’ SOBO iQ braking system delivers intelligent, reliable braking for some of the busiest barge-unloading conveyors on the river network.

Each year the US exports almost 10 percent of its total grain and grain by-product; contributing almost $80 billion to the country’s economic output. Almost 90 percent of the feed grain that’s produced by the country is corn, most of which is grown in Iowa, Illinois, Nebraska, Minnesota and Indiana. The majority of the corn that is exported from these states is shipped along the Mississippi waterway system to the Gulf of Mexico. Simply put, the transport of corn along the Mississippi River contributes tens of billions of dollars to the economic output of the USA every year. 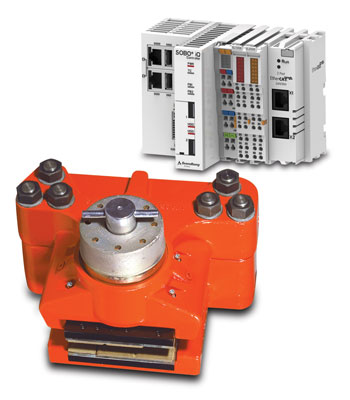 The price of corn, and thus its competitiveness on the international market, is governed primarily by the ease and efficiency of its transport – the actual production values being relatively cheap compared to other commodities. Therefore, the reliability of the network of locks, dams and ports along the network is vital for this important industry. Many of these facilities are now 50 years old or more and investment is needed to fund repairs and refurbishments. Of particular importance is the equipment used to unload the barges once they reach their destination. A single failure here can disrupt the schedule for hundreds of barges and can risk losing valuable crop to the river.

One such example is a large grain elevator facility located near New Orleans, LA, run by a global leader in grain production, shipping and processing. Here, bucket elevators are used to quickly unload the barges. A gantry crane positions the bucket elevator, which is then lowered into the barge via a winch. Exposed to the hot, corrosive salt water conditions found near the Gulf of Mexico, the original braking equipment was approaching the end of its recommended service life. The facility’s managers couldn’t afford for the crane to fail, so they approached Svendborg Brakes for a solution.

Svendborg Brakes, part of Altra Industrial Motion Corporation, specializes in engineered braking solutions, combining design ingenuity with manufacturing know-how to deliver efficient braking solutions for many of the world’s toughest industrial applications. It designed and supplied the original brake system at the facility – which had performed reliably throughout the course of its operating life – so was the natural choice to design the replacement.

To reduce project costs, Svendborg Brakes’ engineers conducted a site visit to examine how the existing system could be repaired and upgraded, rather than installing a completely new system. The resulting upgrade allowed the utilization of the existing brake mounting pedestals to ensure that the system footprint would remain the same. In total, it was estimated that this solution would save $60,000 compared with the costs of completely replacing the system. 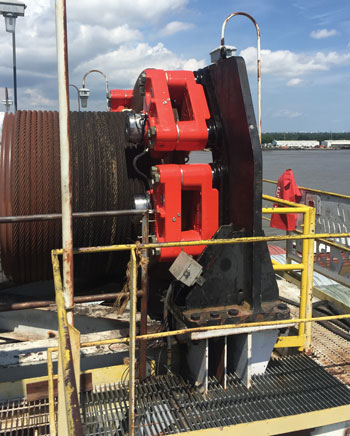 The braking upgrade allowed the use of the existing brake mounting pedestals saving an estimated $60,000 compared with the costs of completely replacing the system.

The new BSFA 635 mono-spring, hydraulically released, caliper disc brakes were coated with a corrosion-resistant finish designed to prolong life in marine and offshore environments. A custom V-seal ring was also installed between the adjusting screw and the yoke to prevent ingress of grain, moisture and other contaminants. Further, the existing control system was upgraded to a SOBO iQ controller to increase the maintainability of the electrical components.

The state-of-the-art, ‘SOft Brake Option’ (SOBO) braking controller provides a soft and predictable braking sequence which is ideal for conveyors and other applications where consistent stopping times or distances are desired. Capable of controlling up to four different hydraulic power units (HPUs) in different locations, the SOBO iQ manages braking torque based on the current speed and detected deceleration/acceleration of the application. This allows it to provide different braking profiles for different operational scenarios including stopping and holding, overspeed monitoring and rollback prevention.

By re-engineering the existing brake design, Svendborg Brakes’ engineers were able to reduce the cost of repairs while also improving the performance and efficiency of the brake system. As a result of the control system upgrade, the operation of this critical piece of machinery was extended further, with greater reliability.

Recent surveys of the Mississippi waterway system reveal that as many as half of the Inland Marine Transportation System structures are more than 50 years old. Beyond adverse weather conditions, the biggest threat to the corn export market in the USA would be disruption to the vital transportation network. This is why intelligent re-engineering projects like the one carried out at the grain elevator facility are so important – minimizing the cost of restoration projects while maximizing the performance capabilities of vital machinery.