A major manufacturer of commercial wood chippers had experienced the complete failure of an imported belted drive installed as a replacement on a chipper from a product line that it recently acquired. After a period of use, the drive sheave broke apart, causing significant damage to the belt drive and other machine components.

The OEM was a long-time belted drive customer of TB Wood’s (TBW). Based on the high level of trust that had been established over the years, the OEM contacted the TBW engineering team to help analyze the failure of the competitor’s belted drive.

After careful examination of the drive design, TBW engineers uncovered multiple problems with the competitor’s drive that would have contributed to the drive’s eventual failure. The competitor drive utilized cast iron, 8-groove sheaves and 5VP belts. Unfortunately, this drive configuration was not designed correctly and used the wrong belt type, number of grooves, and material type for the speed of the drive.

Based on the chipper horsepower and speed requirements, TBW engineers recommended the use of paired 12-groove ductile iron sheaves with expanded capacity 8VP belts. A cross section of the new recommended sheave clearly showed how much more robust the TBW casting was compared to the failed competitor sheave.

The customer was very appreciative of the comprehensive analysis and recommendations that the TBW team provided. This is an example of why TB Wood’s is recognized industrywide as the “go to” sheave experts that “get it right the first time”. 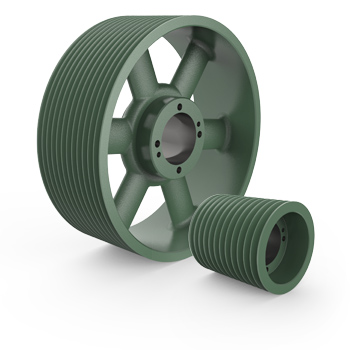