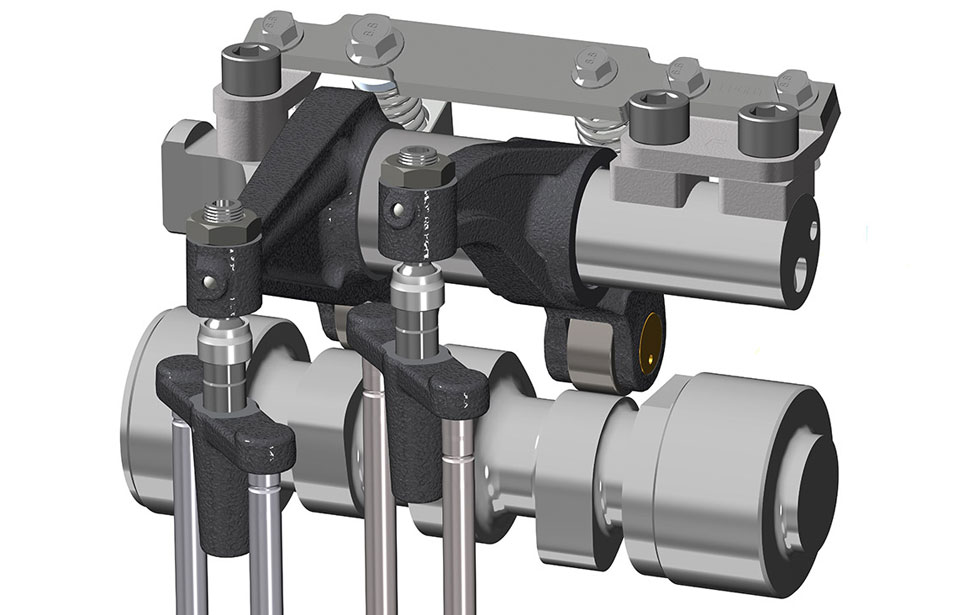 Jacobs’ CDA was installed on a 13-liter Navistar engine and revealed a three percent improvement in fuel consumption, and a corresponding decrease in NOx emissions from the baseline of 0.107 grams per horsepower-hour to 0.097 grams in a heavy duty FTP (Federal Test Procedure) transient cycle test. The NOx reduction is due to the increased exhaust tempertures during cold operation while in CDA mode, which pushes the SCR (Selective Catalytic Reduction) system to it’s most efficient range of 250–400°C.

“CDA allows a six-cylinder diesel engine to operate on just three of its cylinders when it is operating under light load and during cold starts,” explained Robb Janak, Jacobs’ director of new technology. “The CDA mechanism in the valve-train allows the valves in the deactivated cylinders to simply remain closed. The injectors in those cylinders go to zero fuel at the same time to reduce fuel consumption. The engine switches from six-cylinder operation to three-cylinder operation via CDA whenever the load drops below a pre-determined threshold.”

The system has undergone lab testing and optimization for several years now and on a truck for nearly a year. CDA is now ready for additional tests on the road. “We’re excited to collaborate with Navistar on this important demonstration of the technology,” stated Janak. “This is allowing us to show that this is not only ready for the road, but also for the market. It is our hope that we will be able to demonstrate even more fuel savings with CDA in real driving conditions than what we have already demonstrated in the lab.”

Jacobs has been actively involved with the Super Truck programs since its inception in 2009, testing and evaluating a variety of new technologies at its locations around the world with a variety of original equipment manufacturers.

CDA represents a breakthrough because previously its two benefits – lower emissions and improved fuel economy – were mutually exclusive. Alternative technologies for lowering emissions by raising after-treatment temperatures have typically caused fuel consumption to worsen. It enables large engines to have the fuel economy of smaller engines because it increases the load on the firing cylinders, increasing their efficiency; it reduces camshaft friction; reduces pumping losses in part-load conditions; and can reduce or eliminate use of the intake throttle. Any number of cylinders can be deactivated as needed. At the lowest engine loads and with three of six cylinders deactivated, fuel consumption improves by up to 20 percent. During vehicle coasting conditions, CDA can be applied to some or all cylinders to further reduced the air mass flow going through the aftertreatment system to both reduce the cooling, and also reduce engine pumping losses, allowing the vehicle to coast further with less fuel.

Jacobs’ Cylinder Deactivation hardware has so far been demonstrated on ten different heavy-duty engine platforms, covering 7 to 15-liter engines, as well as six different heavy-duty truck road tests. It has undergone 6,900 hours and 118,000 km of durability testing. There have been more than 1.9 billion test cycles on CDA components and over 470 million cycles of fatigue and overload testing. While other solutions from the passcar market exist, they have longevity and durability concerns that do not transfer well to the Heavy Duty market. Jacobs’ results demonstrate that its designs were made for the commercial vehicle market and are proven to perform.

Combining this valvetrain technology with Jacob’s engine braking technologies, developed over nearly 60 years of commercial vehicle experience, can optimize the engine valve train for both positive power and engine retarding making it ready to handle the future requirements of heavy duty operation.